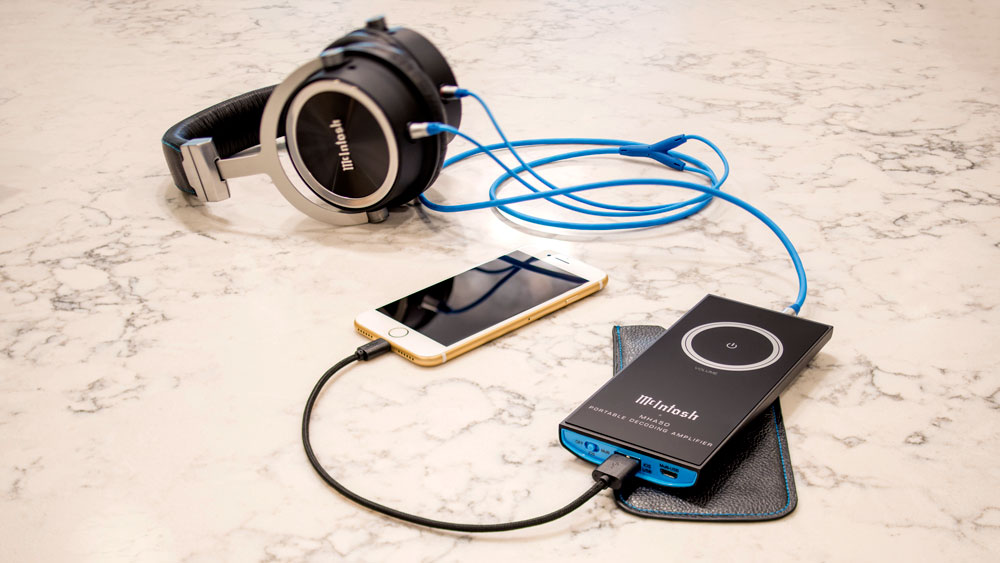 There is nothing quite like the aural transcendence offered by a properly configured six-figure home stereo system, but nowadays, much of our music is consumed on the go. And as well as you may like your iPhone, its built-in audio processing pales in comparison to that of devices dedicated to the task.

In a departure for a brand mostly known for its high-end stereo components, McIntosh revealed its first portable decoding amplifier, the MHA50, earlier this week. Using Bluetooth or USB (either standard or micro), the smartphone-size gadget can interface with iOS and Android devices (the latter of which must support USB On-the-Go), as well as Windows and Mac computers. Once connected, the MHA50 acts as a dedicated digital-to-analog converter (DAC) that is able to decode 32-bit/192kHz high-resolution files, a range of DSD files, and asynchronous USB audio, and output them at a higher level of quality than the source device is capable of.

The decoding amplifier outputs all its audio through a gold-plated 3.5 mm jack, which can accommodate all types of headphones or even a pair of desktop speakers. It also includes McIntosh’s Headphone Crossfeed Director (HXD) technology, which improves the audio signal’s imaging, creating a more vivid sense of space when listening through headphones.

The MHA50’s tapered body is primarily constructed from extruded aluminum—which provides some shielding from external interference—and features a front glass panel marked by a large touch-sensitive volume knob. The portable gadget’s rechargeable battery has enough juice to power it for up to six hours when using Bluetooth, though it lasts for considerably longer when using a USB connection.

McIntosh is currently accepting orders for the $700 MHA50, with deliveries expected to begin next month.

Create your own user feedback survey