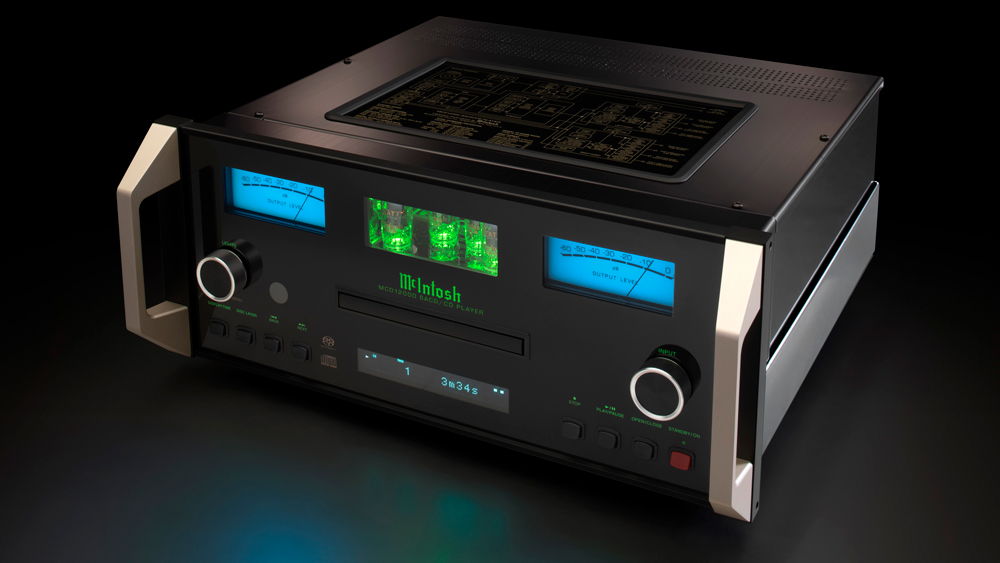 When conversations at cocktail parties stall, talk often gets kick-started by harmless subjects like automobiles or local restaurants. Musically aware folks, especially younger ones, might confess their newfound infatuation with vinyl. I always congratulate them, with the caveat that record collecting can be a slippery slope, and, like a baby pot-bellied pig, is manageable at first but can become a large, all-consuming burden.

It’s true, I always add, that the best analog rigs can be more rewarding to listen to than any other playback medium, sonically and certainly for the tactile and aesthetic perks that come with LPs. But when I mention the other thing that spins, and that I still actively buy and collect compact discs, listeners are often rendered speechless, as if I’d suggested that spats and gaiters are still fashionable men’s footwear.

So just when “streamers” proclaim the eventual demise of physical media, especially the CD, a serious company like McIntosh ups the ante with a new “statement” component proving that the compact disc is more viable than ever. In context, of the $15 billion in recorded-music revenue last year (based on numbers from the Recording Industry Association of America), about 83 percent came from streaming, LPs brought in 7 percent—nearly $1 billion—while CDs accounted for the remainder, excluding a dewdrop from tape sales. Even if compact disc sales decline and vinyl sales increase, as the trend suggests, the billions of CDs in circulation and the rarity of some titles suggest that shelves of the easy-to-collect objects will remain relevant for generations, or at least until their physical layers of 0s and 1s delaminate, leaving LPs the last-standing proof of mankind’s music-making, millenniums from now.

But back to the present. McIntosh, the oldest electronics manufacturer in the United States, has long supported the CD format and now introduces its largest, most ambitious CD player to date. The MCD12000 is really two separate components in one, since it serves as a stand-alone, reference-level digital-to-analog convertor (DAC) that includes reference-level SACD/CD playback capabilities.

The above means that streamed or stored media signals, fed through the digital inputs or read from compact discs, are processed by the MCD12000’s professional grade ESS Sabre Pro ES9038PRO 32-bit/8-channel DACs, one each dedicated to the left and right audio channels. Separate digital and analog power supplies eliminate cross-contamination between power and audio signals, while an exclusively constructed power transformer—a McIntosh specialty—minimizes noise radiation.

A host of balanced and unbalanced fixed outputs and seven types of digital inputs support a variety of system configurations.  Van Zandbergen, courtesy of McIntosh.

Another McIntosh specialty in some of its highest-end components is the choice of solid-state output or a blend of vacuum-tube and solid-state amplification. For the vacuum-tube topology, one 12AT7 tube and a 12AX7 tube are assigned to the left and right audio channels, their green glow visible through a window on the black glass front panel. Flanking that window into the “soul” of the MCD12000 is a pair of 60dB output meters that show the signal level delivered from the analog outputs of each channel, each casting the blue light beloved by McIntosh owners.

At either side of the standard-width front panel are custom machine-brushed aluminum handles. Naturally, a host of balanced and unbalanced fixed outputs and seven types of digital inputs support a variety of system configurations. Importantly, the disc transport is made to stand the test of time, and uses a precision die-cast aluminum tray for smooth, quiet disc handling, while an advanced digital servo spins discs accurately and quietly. Quite by coincidence relative to the model number, the new MCD12000 is priced at $12,000.