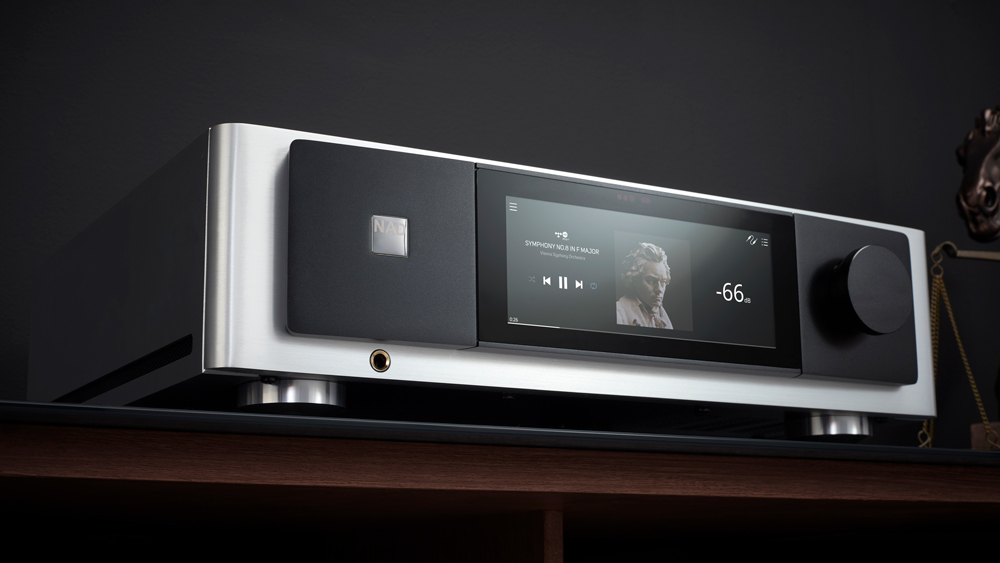 How long have you been telling yourself, “One of these days, I’m going to get a serious stereo system”? Usually, one approaches that goal with a complicated, costly witch’s brew of components—cables, speakers and accessories that, once arranged, would be more at home in Dr. Frankenstein’s laboratory than a tranquil domestic interior.

Enter the NAD Masters M33, which may be the most accomplished two-channel integrated amp in high-end audio. That’s because the M33 is far more than just an integrated amp. In fact, it replaces six components: music streamer, DAC, phono stage, preamp, power amp and headphone amp. It’s so versatile—and simple—that one can just add speakers and have a state-of-the-art sound system, one upon which it would be very difficult to improve.

The NAD Masters M33 may be the most accomplished two-channel integrated amp in high-end audio.  Photo: Courtesy of NAD Electronics.

What the M33 does is remarkable, upping the ante on its predecessor, the M32—with which I’ve lived for a few years—in a big way. The most notable improvement is the amplifier part of the equation. Specifically, HybridDigital Purifi Eigentakt amplification, a game-changing Class D technology (Eigentakt means “self-clocking” in German) that produces ultra-low distortion regardless of frequency or load.

With 200 wpc into 8 Ohms, the M33 can drive any speaker. This cool-running, all-in-one component is also a full-featured preamplifier with two outputs for running outboard subwoofers. In an age of minimalist line-level preamps, it bucks that trend by including both a moving-magnet and moving-coil phono stage.

As if that weren’t enough, the M33 incorporates an exceptional DAC with MQA processing. Employing one ESS 9028PRO Sabre DAC chip per channel, it goes toe-to-toe with many stand-alone DACs. But streaming capability is what tips the scales. NAD’s wireless BluOS technology can access local collections and streaming services using a tablet or smartphone, and with it, the M33 becomes the command center, syncing with other NAD BluOS devices in other rooms to offer wireless, whole-house audio if one so chooses. An added surprise for headphone users is the built-in discreet headphone amp capable of driving even planar and high-impedance headphones.

The NAD Masters 33 is so versatile that one can just add speakers and have a sound system that would be very difficult to improve.  Photo: Courtesy of NAD Electronics.

Some components just look and feel like money. Weighing about 40 pounds, the M33 features a sleek aluminum chassis that’s beautifully machined and includes a black glass touchscreen and a single large knob—for volume—although fingerprint-phobes can use the comprehensive remote control and admire the M33 from afar.

For a tidy two-box system, pair the NAD Masters M33 with the NAD Masters 50.2 Digital Music Player, a unicorn of a component that incorporates not only 2TB of hard storage but a CD ripper that also functions as a transport for CD playback. One AES/EBU cable links the M50.2 to the digital input of the M33.

Its all-in-one capability and affordable price make the M33 a top recommendation before the power switch is even turned on. But its performance is what takes the M33 from highly recommended to flat-out “You’d be insane not to buy this!” So, how does it sound? The trailblazing amplifier design by digital amplification pioneer Bruno Putzeys might be the most revolutionary recent advancement in audio—and certainly in Class D.

A rear view of the all-in-one component.  Photo: Courtesy of NAD Electronics.

The M33’s predecessor, the M32, uses Ncore (Hypex) technology, but the M33 offers a noticeable improvement across the board, delivering more articulate, authoritative bass, and really impressing listeners with its liquid midrange, free of etched overtones often associated with digital amplification. Loudspeakers used for reviewing were the Harbeth 40.2, a revealing component that does not suffer fools (apart from this owner) when paired with under-performing electronics. With the M33, all the sonic touchpoints of air and space, immediacy, natural warmth and bass slam are present.

Weighing about 40 pounds, the M33 features a sleek aluminum chassis, a black glass touchscreen and a single large knob for volume.  Photo: Courtesy of NAD Electronics.

Added to the M33’s parlor tricks are the tangible improvements wrought by digital room correction, performed by Dirac Live. This equalization software analyzes speaker output and listening-room acoustics to optimize performance and eliminate sound coloration, while enhancing clarity, focusing the sound stage, and delivering deeper, tighter bass. Users download Dirac software, then plug the microphone provided with the M33 into the back panel to measure speaker output in a variety of room positions with a series of test bursts that correct response from 20 Hz to 500 Hz. A more advanced program, Dirac Live Full (available for $99), optimizes performance through the top octave—20k Hz—though it’s the critical low bass through mid-midrange frequencies where the magic happens. Proof that—sometimes—the best things in life are free.

A system bettering the NAD Masters M33 only comes at much greater cost. In fact, the M33’s sonic performance, full-featured flexibility and flawless build quality are so impressive that a $20,000 price tag wouldn’t seem out of line. That the M33 sells for $4,999 is as miraculous as the component itself.