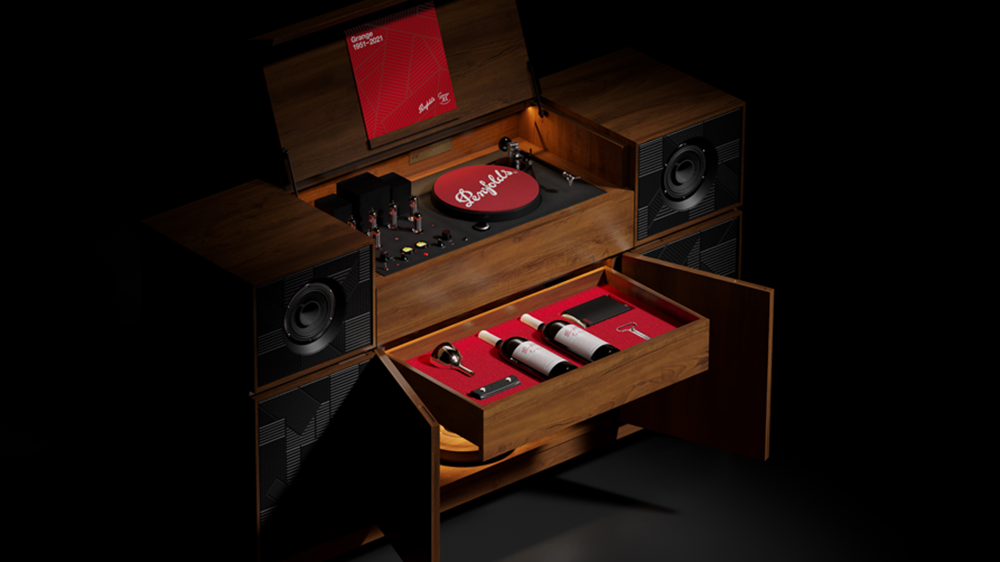 Penfolds wants to bridge the gap between fine vino and stellar music. The venerable Australian vintner has just unveiled a new record player to honor the birth of its prized flagship wine.

It’s been exactly 70 years since winemaker Max Schubert unveiled the first vintage of Penfolds Grange and proved that Down Under was more than capable of producing desirable high-end wines. In fact, a bottle of that very 1951 vintage sold for $40,900 back in 2017.

Schubert was also a big fan of music, which is what inspired this unique console. The design itself takes cues from the classic all-in-one consoles from the 1950s that came to prominence the same decade as Penfolds. Each console is handmade by a single craftsman at Symbol Audio and requires around 100 hours of painstaking work.

The cabinet has a midcentury modern aesthetic with an abundance of wood and sleek lines. The centerpiece is the minimalist record player that comes equipped with a Penfolds-branded turntable mat. The winery says the record player pairs time-honored analog electronics with digital technology to deliver rich, premium audio.

The secret compartment holds a Grange magnum duo from the 2010 and 2017 vintage.  Penfolds

“Music, like wine, takes us to another place,” Peter Gago, the chief winemaker at Penfolds, said in a statement. “It so effortlessly conveys life recollections of important times and places.”

Elsewhere, there’s a set of sizable speakers and two separate compartments that can store eight wine glasses and your vinyl collection. The whole console is also backlit by an automatic interior light that adds a little moodiness.

The real pièce de résistance, though, is the secret drawer that houses a suite of luxury accessories, including a hand-blown Grange Decanter crafted by leading Australian artist Nick Mount, plus two incredible bottles of wine.

The rare “White Capsule” release included with the console comprises a Grange magnum duo from the 2010 and 2017 vintage. These investment wines are meant to be aged and enjoyed anywhere between 2030 and 2060.

Much like its vintages, the Penfolds record player is exclusive by nature. Only seven have been produced globally, with the price available on request.