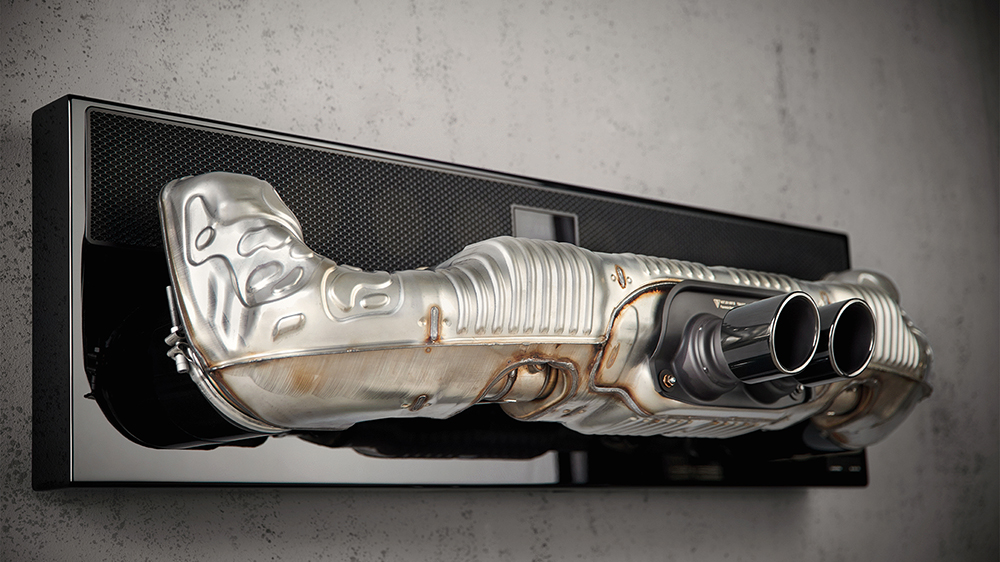 With the holidays now in sight, Porsche Design’s new soundbar might be just right for the car and movie lover in your life.

The German design studio has just unveiled the limited-edition 911 Soundbar 2.0 Pro. The audio device isn’t just named after Porsche’s most famous model, it is actually made from the exhaust system from one of the sports cars.

Soundbars tend to be pretty spartan and discreet. As the name suggests, they’re usually elongated speakers that can be placed beneath your TV on a stand or mounted to the wall. They’re meant to be heard, not seen. Not Porsche Design’s new soundbar, though. It’s as brash as the sports car it shares a name with. That’s because the speaker’s body is made from the exhaust system from the current 992-generation 911 GT3. It’s unorthodox, and definitely not for everyone, but we get the feeling there are more than a couple Porsche diehards who can’t wait to add it to their home.

As with Porsche Design’s other products, there’s more to the 911 Soundbar 2.0 Pro than just a bold design. The 2.1.2 virtual surround sound system has 300 watts of system power and 4K-compatible HDMI ports. It also features Bluetooth 5.0 and Dolby Atmos DTS-HD, and works with both Apple AirPlay 2 and Google Chromecast. In-room multi-channel streaming technology also allows you to link it up with another of the brand’s soundbars if you really want to upgrade the sound of your home theater setup.

If you’re interested you’ll want to pre-order the soundbar soon. Porsche Design’s website makes clear that the speaker is “strictly” limited to just 500 examples. They don’t come cheap either. The 911 Soundbar 2.0 Pro is available for $12,000, easily making it the most expensive option in the brand’s surprisingly robust speaker lineup.

Looking for other auto-inspired speakers? Ixoost, an audio company based out of Italy, has been making home audio equipment aimed at car enthusiasts for years now. The company currently sells eye-catching models based on the Mercedes-AMG GT, the Lamborghini Aventador and Pirelli race tires.