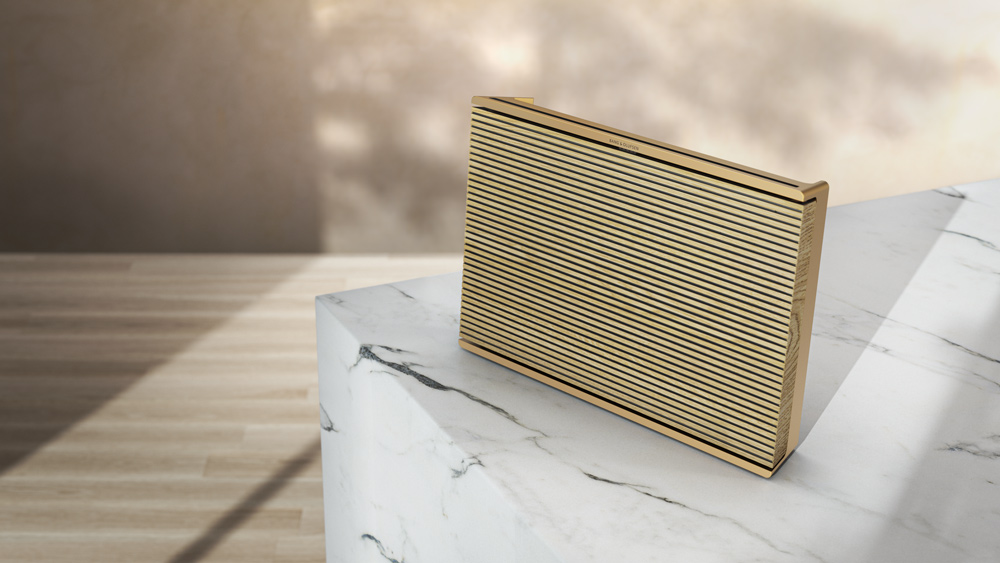 At first, a passion for audio and automobiles may seem worlds apart, but in fact, there are many similarities that apply to both pursuits. High-end music systems and high-end sports cars tend to be single-purpose, uncompromising and—usually—very expensive. Both deliver extreme performance, and often as not, require more than a bit of experience and attention to own and enjoy. Using them constitutes a special occasion, and just as one doesn’t ordinarily drive a supercar to the supermarket, it’s just as unlikely that a pair of towering loudspeakers powered by racks of electronic gear will be pressed into service when pleasant background music is what’s on order.

Any serious audio or automotive enthusiast knows that it’s hard to compromise when adding a more modest sound system or car to the daily routine, and the challenge is finding one that offers quality in its design and manufacture, along with performance that won’t disappoint. Let’s be honest about the industrial design of most consumer products, whether they’re portable computers, toasters, toothbrushes or televisions: the majority end their short lives as the deserving denizens of landfills. Ugly and cheap, they represent a profligate waste of resources, energy and opportunity by their designers to create something actually worth keeping. Most wireless sound systems are guilty as charged, so bereft of aesthetic merit that it almost doesn’t matter how they sound. Life is too short to bring bad design into one’s home. Thankfully, there is an antidote, and it sounds fantastic.

Bang & Olufsen has, since the 1960s, brought exceptional industrial design to the realm of consumer electronics. Jakob Jensen—and later, designer David Lewis—can be credited with dozens of landmark B&O products whose influence was so great that many have found their way into museum collections around the world.

Veteran designer Torsten Valeur is responsible for the Beosound Level, one of the latest additions to the brand’s portfolio of components, so it’s no surprise that this wireless speaker is essentially a piece of domestic sculpture doubling as a sound system. Only slightly larger in dimension than a legal pad, and about two inches in depth, the Bluetooth-enabled speaker streams source music with rich, room-filling sound. Battery operated, the Level stands up, lays flat or hangs on a wall. It can be carried from room to room, and, because it’s dust and splash resistant, even takes its talents outdoors. Importantly, its modular software is upgradable and ensures that the Level, priced at $1,499, is an investment for the long run.

With only slightly larger dimensions than a legal pad, the Beosound Level is about two inches in depth.  Photo: Courtesy of Bang & Olufsen.

Valeur shared with us his approach to designing a product that endures. “People may think that designing for Bang & Olufsen is all about giving products the ‘right’ style, but it isn’t. It’s about creating products with enduring magic appeal. Great design, the kind that defies trends and fads, comes from finding the true identity of an object so that it stays desirable over time. This true identity is both original and new, intuitive and obvious. A design that is both original and iconic stands a better chance of keeping its appeal. Such a design has an inherent sculptural identity that draws attention for all the right reasons; because it is relevant, beautiful and made to last.”

Acknowledging that no piece of great design was created within a vacuum, Valeur elaborated, “Beosound Level is a highly versatile speaker, so we had to factor in how we made all the different placement options work whilst still having a unified design. Some people have asked whether the classical transistor radio was the source of inspiration, but for the design of Beosound Level, we actually found a lot of inspiration from trays, tools, steering wheels and Scandinavian modern furniture in the way they use an air gap to make things appear dynamic and elegant.”

The Level can stand up, lay flat or even hang on a wall.  Photo: Courtesy of Bang & Olufsen.

Upgradability was instrumental in shaping the Beosound Level’s design brief. The internal streaming module incorporates digital signal processing (DSP), streaming engine technology for wireless connectivity and antennas. To ensure a so-called future-proof product whose processing power and connectivity can keep pace with and incorporate yet-to-be-developed technology, the module can be removed and replaced as standards and systems evolve, giving the Level a lifespan measured in decades, not years. And unlike some phones and portable computers we know, the internal battery has a 16-hour playback time and, because of its modular design, can be replaced by the owner if necessary.

The lithium-ion battery is charged to full capacity in three hours with an elegant AC-powered magnetic disc that attaches to the rear of the unit, and even the charger’s power cord is insulated in polymer or fabric, depending on the Level’s aluminum finish. An optional $119 wall bracket also charges the speaker.

Bang & Olufsen is a leader across the consumer electronics industry when it comes to incorporating aluminum into their product design. Both in application and fabrication, its work in the field is world class, and the company’s Factory 5 facility in Struer, Denmark, features no less than 50 anodize baths. The pearl-blasted aluminum frame of the Level has a heft and hand feel that make carrying the 7.26-pound unit from location to location an occasion, like unstoppering and pouring a favorite spirit from a crystal decanter.

Its frame is the Level’s design signature, and is finished in either natural (silver-gray) or a soft gold tone (there’s no bling at B&O), with speaker covers in a dark gray Kvadrat fabric or natural light oak wood slats accompanying the two finishes, respectively. The covers are removable and can be changed out when new colorways and materials are made available in the future.

The lithium-ion battery is fully charged in three hours with an AC-powered magnetic disc that attaches to the back.  Photo: Courtesy of Bang & Olufsen.

When it comes to sound, it’s what’s inside that counts. The enclosure body is made from a high-performance recycled polymer material. Within that small package are entrails that nearly defy the laws of physics, producing far more substantial sound than the Level’s compact dimensions suggest. The front-facing, five-speaker complement includes two 4-inch woofers, each with its own 30 w Class D amplifier; two 0.8-inch tweeters driven by a 15 w Class D amplifier; and a 2-inch full-range transducer driven by a 30 w Class D amp. Despite the modest size of the drivers, frequency response is 39 Hz to 23,000 Hz. Along with active room compensation, the sound stage is optimized for position, either upright on a floor or shelf surface, or lying flat on a table or counter. Controls are voice and touch activated, with a proximity sensor that also adjusts lighting of the top controls. Streaming formats include Apple AirPlay 2, Chromecast, Spotify Connect and Bluetooth.

The component’s covers are removable and can be changed out when new colorways and materials are made available in the future.  Photo by Jeppe Sørensen, courtesy of Bang & Olufsen.

That a three-channel speaker system can throw a full-scale stereo image is a remarkable sonic sleight-of-hand. The parlor trick is accomplished by mixing the left and right source input into two middle and side signals, maintaining the spatial cues that keep center sound-stage information in the middle. The Beosound’s processing software algorithms maintain a stereo-like image, regardless of the listener’s position. In the near future, the B&O app will allow users to employ two Level’s in a traditional left/right stereo pair configuration.

Nothing about good design happens by accident. Every detail matters. “The design invites an active engagement with its user,” Valeur explains. “No matter its placement, the speaker is easy to grab and move.” Indeed, the Beosound Level is a great accomplice to have in the house, office or garage, where quality sound can be appreciated alone or shared among friends. With the Level in one hand and a cocktail in the other, it’s liberating to move a conversation from room to room while maintaining the continuity of the musical experience.

The Beosound Level is a piece of domestic sculpture doubling as a sound system.  Photo: Courtesy of Bang & Olufsen.

Like a tiny parrot, it’s amazing that the Level can get so loud, without distortion. Perhaps even more important is that it delivers a convincing, detailed and articulate musical soundscape at lower volumes that allows for a conversation without raised voices. Whether it’s the primary system for a smaller space or a musical sidekick for leisure listening, the Beosound Level is a sonic and aesthetic overachiever in the world of wireless speakers.