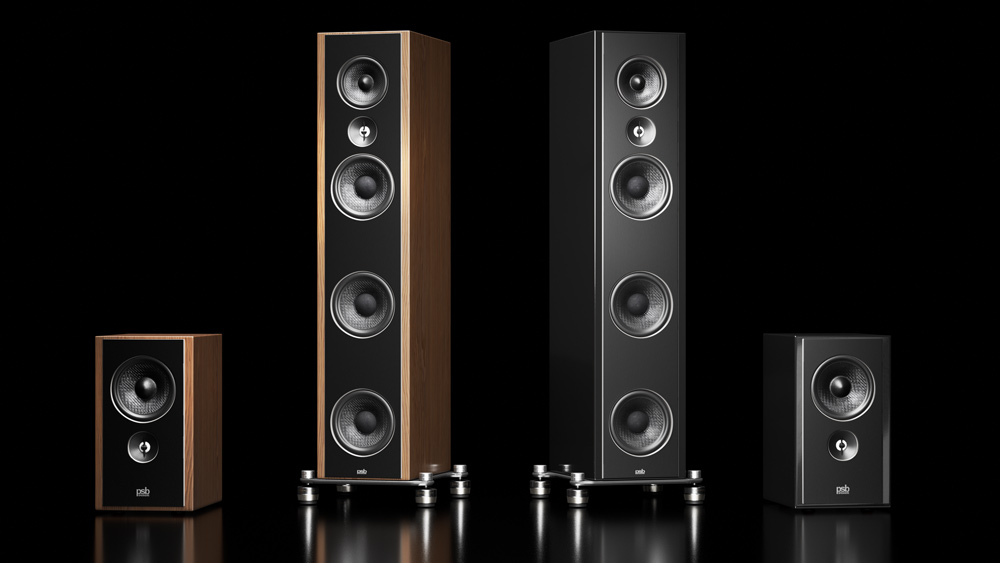 The new 600 Series from PSB Speakers features two models, a bookshelf and a tower that share fundamental traits and aim to fill the sweet spot for listeners who want high-performance sound in an elegant, affordable package. PSB is a Canadian company that, since its founding in 1972, has practiced a “True to Nature” philosophy that shines through in the accurate sound of its loudspeakers.

That the Canadians take sound seriously is evinced by the Acoustics Labs at Canada’s National Research Council (NRC), a government organization established to promote advancements in research and technology. That’s where Paul Barton (Mr. PSB) and his acoustics specialists design and engineer products for PSB, a brand known for delivering a lot of performance for a relatively modest cost.

The Synchrony B600 can be placed on a bookshelf, or ideally, into the room with dedicated speaker stands (shown here), available at extra cost.  Photo: Courtesy of PSB Speakers.

The PSB Synchrony B600 bookshelf ($2,499 per pair) and T600 tower ($7,999 per pair) are the top of the current PSB loudspeaker lineup and feature clean, contemporary designs that will be especially welcome as a complement to modern interiors. The rectilinear cabinets are beautifully finished in smooth satin walnut veneer or high-gloss piano black, with a black aluminum front baffle visible when the magnetic-affixed black cloth grilles are removed. There are no fussy cabinet embellishments to draw attention and detract from concentrating just on the sound, which is equally clean, clear and unadorned. Solidly built, carefully finished and weighing 23 pounds and 77 pounds, respectively, the B600 is bi-wirable and the T600 is tri-wirable—an indication of how serious PSB engineers have approached the design details to urge optimal performance from the Synchrony systems.

Technically, the Synchrony speakers are conventional rear-ported designs, whose heavily braced MDF cabinets’ top, sides and rear pass the knuckle test with a dull thud, while front baffles layered with an aluminum plate elicit barely any resonance at all. The two-way design of the B600 uses a 1-inch titanium dome tweeter (with ferrofluid and a neodynamium magnet) that crosses over at 2,200 Hz to a 6.5-inch midrange/woofer with a carbon-fiber cone, rubber surround and a cast-aluminum basket. Unusually, the tweeter is located below the midrange/woofer, requiring a little higher placement to position the tweeter on axis with the listener’s ears. Thoughtfully, four flexible isolators recessed into the bottom of each enclosure provide a high degree of non-resonant decoupling from the surface onto which the loudspeakers are placed. Matching 24-inch stands are available in a black finish.

Unusual for a two-way design, the tweeter of the Synchrony B600 is situated below the midrange/woofer.  Photo: Courtesy of PSB Speakers.

Frequency response of the B600s is an honest 55 Hz to 20,000 Hz on axis, within a narrow 1.5 dB range. Nominal impedance is 6 Ohms, minimally dipping to 4 Ohms. With the component’s sensitivity of 88 dB, amplifiers ranging from 15 to 150 watts are recommended, and we drove our review samples with a rather heavily modified 50 wpc Quad 306. Its ability to drive the B600s to ear-splitting volumes is an attribute that, like a supercar capable of a 200 mph top speed, is fairly meaningless in real world situations where natural levels are the measure of sound quality. Plus, we were raised better than that.

For those who want a full-range bass experience, the T600 towers are a five-way transitional array using three 6.5-inch woofers, a 5.25-inch midrange and a 1-inch dome tweeter. The enclosures are internally divided with individually tuned chambers and rear-firing ports for the woofers to minimize standing waves and cabinet distortions. The ports can be tuned with covers to suit individual room acoustics, based on room size and placement from walls. Because the T600 towers generate considerable bottom end, PSB has integrated costly IsoAcoustics isolation feet into outrigger stabilizers to put a sophisticated and effective kibosh on resonances, while adding extra stability to the slim, 41-inch-tall cabinets. Notably, the T600 and B600 are designed to be compatible with one another as front and rear channels in a surround system.

I’ve long been a fan of stand-mount monitors, favoring near-field listening and the immersive experience that a pair of good bookshelf speakers bring to the party. Not being one to luxuriate in larger-than-life voices and instruments, I find that nothing screams “fake” more than an eight-foot-tall soprano or a six-foot wide crumhorn. And because my preferred musical fare is mostly all acoustic, I’m happy to take speed, detail and point-source perfection, leaving the window-rattling bass from an ill-recorded Marshall stack for another day.

The Synchrony T600 tower integrates beautifully into contemporary interiors and does not dominate the room, thanks to its modest footprint.  Photo: Courtesy of PSB Speakers.

Make no mistake; there is a time and a place for Exile on Main Street or Electric Ladyland, but neither of those rock masterworks are references of the real. I also like to discover affordable loudspeakers that I can recommend to folks who haven’t jumped onto the lunatic bandwagon and just want to put together a great stereo rig priced within the realm of reason. With such economy in mind, single speaker cables were run in deference to a double-the-cost bi-wire setup that the B600s have been designed to accommodate. The listening room was a well-damped office, approximately 12 x 15 x 8; the kind of smaller space that listeners might equip with a compact high-end system.

PSB has employed custom IsoAcoustics isolation feet on the T600, based on that company’s GAIA II isolators.  Photo: Courtesy of PSB Speakers.

The PSB Synchrony B600s are precisely that: compact, high-end and with an emphasis on “precise.” These speakers excel at micro-dynamics; ferreting out minute details in recordings that will surprise those who think they’ve heard the music before. Midrange is king, as any Quad ESL owner knows, and though the B600 is no Quad (nothing else is), it does an admirable job of presenting the all-important “frequencies that matter” with an open, articulate realism, dynamically and with the ability to position instruments and voices within a realistically scaled and well-defined soundstage.

But before one dismisses this 9 x 15.5 x 11.5-inch box as a lightweight, it should be noted that what emerges from its 6.5-inch woofer is solid, satisfying bass with real impact, such that instruments like the string bass of a jazz combo and kettle drums from a symphony have an authoritative voice. When the volume knob “goes to 11,” these deliver high SPL (sound pressure level) without compression or distortion—an attribute of the best small monitors.

Speaker terminal jumper bars at rear allow serious users to tri-wire the T600, or to use three amplifiers.  Photo: Courtesy of PSB Speakers.

There is heavy competition in both the bookshelf and floor-standing loudspeaker arenas, and one could dedicate a year of weekends auditioning every worthwhile brand and model. Compared to the PSBs, one can spend less—or a whole lot more—but it’s a safe bet that the PSB Synchrony B600 and T600 will satisfy anyone looking for well-built, artful performers that deliver far more than their footprint and price suggest.