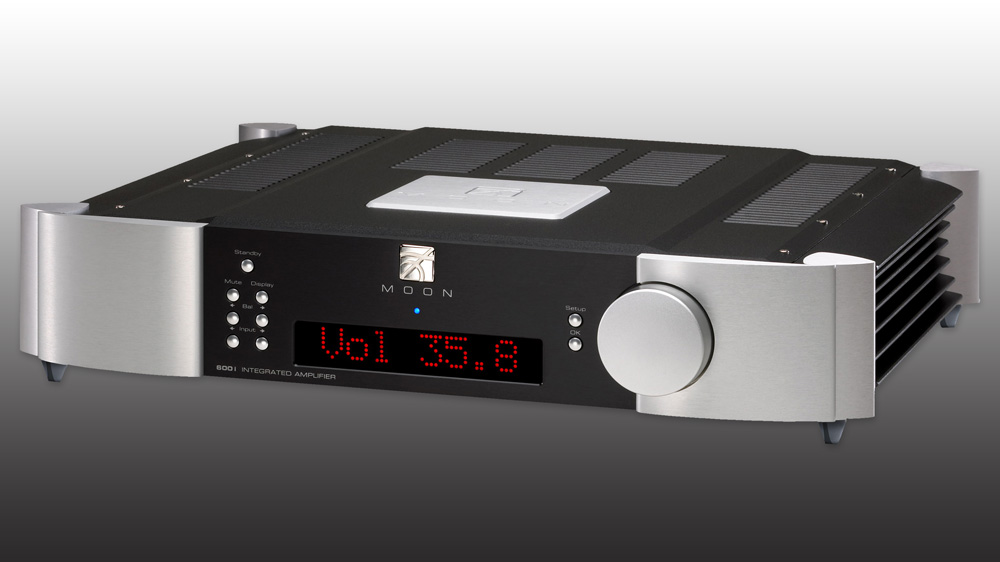 At first glance, Simaudio MOON products appear otherworldly—alien, even. And no, it’s not because the brand is Canadian; it’s the sleek, spaceship-like qualities of its devices, which often feature big, machined-metal feet that run the length of the chassis. Not to mention the large, red, and very readable volume displays—as well as the combinations of black anodized metal and brushed aluminum. So, enamored by product images and Moon’s stellar reputation, we jumped at the chance to spend some extended time with the 600i V2 integrated amplifier in-house for an in-depth review.

So what do our neighbors to the north at Simaudio have to offer hi-fi enthusiasts? We gave a positive review to its 230 HAD headphone amplifier in 2016 and took a look at its obscenely powerful 888 amp last year. And while the brand has been impressing audiophiles with its varied catalog since 1980, power amplifiers and integrated amps have always been part of its core offerings.

The 600i V2 integrated amplifier is an updated version of the original 600i released back in 2007, which succeeded the MOON i-7. The latest amplifier is robust in its features and power output considering its size. It maintains a low profile, but is nearly as deep as it is wide, giving it a presence that is very low-slung yet imposing—not unlike a sports car. Simaudio vice president Costa Koulisakis says he often hears their products described as “macho,” and I am inclined to agree.

In addition to 4 single-ended inputs and a set of balanced inputs, the integrated amp includes a pair of outputs that can be set to either variable loudness—meaning the device acts as a preamplifier for a separate amplifier—or to fixed loudness, which acts as a pass-through for connecting to other components. I found the fixed loudness feature especially useful, as I could just mute the speakers connected to the V2 outputs and switch to a separate headphone amplifier using the same source with ease. One of the V2’s big selling points is its electronic volume control with 530 steps, allowing for very specific volume tuning. If one desires, there are also various menu options for renaming inputs to match source components (such as DAC or PHONO). The amplifier inputs are all standard—there are no included phono stages or DACs—so listening through the 600i V2 requires separate source components.

All transistors in the amplifier are custom manufactured to SimAudio’s specs, as are the two giant toroidal transformers located inside the chassis. Those transformers give the amplifier its 125 watts at 8 ohms rating, which appears conservative on paper, but in practice, the volume that those watts can drive is significant. Even some of the toughest speaker loads can be driven with ease by the 600i, running up to 250 watts per channel at 4 ohms.

Although the manufacturer recommends a break-in period of 600 hours to fully realize the amplifier’s potential, I heard notable bass improvements within the first few hours of having the 600i V2 in my system. Its frequency response bottoms out at 10 Hz, and although my loudspeakers do not respond that low, the improvement was palpable, both in bass tightness and overall texture. My favorite live album from Dave Brubeck, Concord on a Summer Night, features a hot cut of “Take Five” whose bassline can sound tubby and overdriven at times, but the 600i V2 handled it with ease, delivering precision and fast bass response that floored me. The amplifier brought that 1982 performance to a whole new level of realistic reproduction that I had not heard before in my listening room.

The 600i V2 does not have the projection that one might notice with more powerful amplifiers, but it makes up for that with unbelievable instrument separation. A DSD track of Pink Floyd’s classic “Breathe” played through the amplifier makes you want to throw caution to the wind and start dancing with the band, because it sounds like they are in the room, personally creating the ambient atmosphere for you. Gilmour’s steel guitar is present, lifelike, and discernible from every other instrument.

Given the otherworldly aesthetic of the 600i V2, it only made sense to give the latest Star Wars soundtrack a listen with it, and I was not disappointed. Its design is ideal for reproducing the powerful brass layers of John Williams’ latest masterpiece. The amplifier offered powerful, clean, and transparent reproduction as faithfully as one would expect from a Simaudio MOON product.

At a $9,000 price point, it is hard to argue with the value that the 600i V2 brings. Users might wonder what sort of spacecraft has landed in their listening room when opening the box, but the imposing figure of the Simaudio product soon gives way to sonic bliss as the controlled bass; cleanly laid out sonic images; and vibrant, transparent music are realized. Discerning listeners in the market for a new integrated amplifier may need to look no further than Simaudio dealers, as the company has created something truly special with its latest offering.