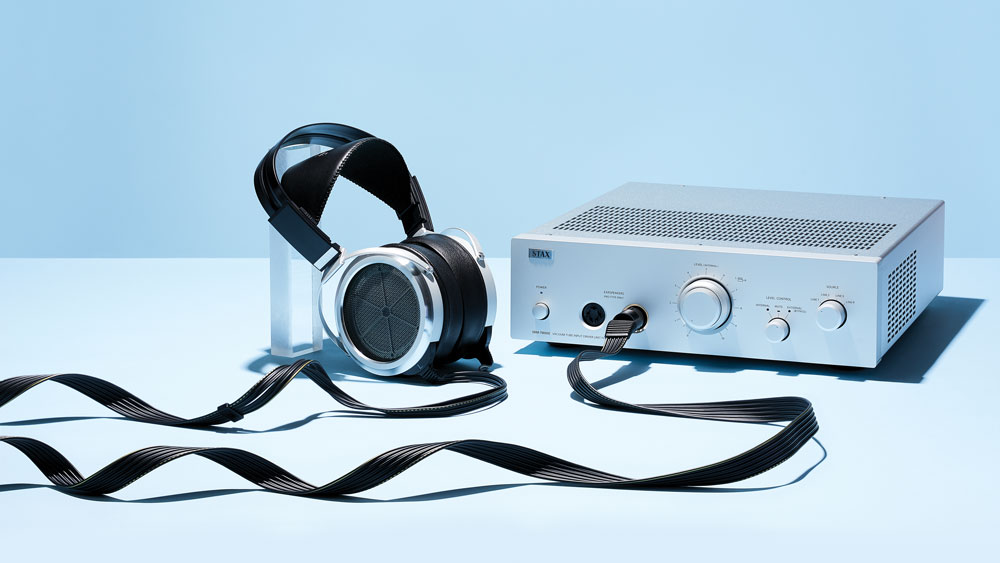 Among the many species of connoisseur—philatelists, oenophiles, birders—few can compete with audiophiles for the title of Most Insufferable Person to Be Cornered by at a Cocktail Party. I have been that person for whom first dates have gone terribly wrong, even relationships doomed, by mountains of gear and monstrous loudspeakers. Indeed, my most successful and longstanding relationship might be the 42-year-long affair I’ve had with Stax audio equipment. The Japanese recording engineer Naotake Hayashi established Showa Ko-On Manufacturing in 1938, renaming it Stax Industries in 1952 and introducing its first pair of “earspeakers” in 1960. At the time, Hayashi could scarcely have imagined that his company would be on the first ripple of a massive consumer wave in the 21st century. Within the last decade, headphones have become the speakers of choice for many listeners (a trend illustrated by our most recent reader poll, on page 24), and last year, name brands took in more than $15 billion in worldwide sales. Stax still sits at the top of this genre in terms of quality—but remains known only to an infinitesimal fraction of audiophiles. The 80-year-old manufacturer may well be the best-kept secret in high-end consumer electronics.

That Stax has always called its products earspeakers, not headphones, is a clue to the seriousness with which the company takes music reproduction. Such ultrahigh-fidelity transducers can only be compared to cost-is-no-object loudspeakers, and to hear a pair of the company’s current flagship, the SR-009, is to enter a heavenly musical realm.

My stairway to heaven, as it were, started in college in 1974, when I first made the life-changing discovery of audio. I soon sold my car and bought a hi-fi system anchored by Quad electrostatic loudspeakers, perhaps the most significant audio product ever invented. The speakers’ sonic excellence lay in the use of electrostatic panels instead of cone drivers. Electrostatics feature a plastic membrane that is coated with electroconductive material and suspended between two parallel fixed electrodes. A polarizing voltage is applied to the diaphragm, and when the fluctuating voltage of the audio signal reaches the electrodes, the diaphragm moves back and forth by the repulsion and attraction of electrostatic forces, producing sound waves. The diaphragm moves in absolute compliance with the amplifier output—with no time lag or distorted waveforms.

My Quad electrostatics rendered music with transparency, detail, and speed unmatched by any dynamic speaker of the time (and few today). Listening to my albums on the Quads was a transformative experience. And then I discovered Stax.

Stax reemerged after World War II selling condenser phono cartridges based on the electrostatic principle. It soon released a tonearm, and by 1954 it had developed an electrostatic tweeter. The Stax miracle occurred when Hayashi introduced his SR-1 earspeakers—the world’s first electrostatic headphones—in 1960. In 1964, Stax extrapolated its earspeaker technology with a trio of electrostatic loudspeaker models.

My first Stax encounter was in 1976, at an audio salon demonstrating the brand’s SR-X/MK3 earspeakers and game-changing DA-300 amplifier. Perhaps the finest amp of its era, it was a 90-pound, 150-watt-per-channel behemoth the size of a  microwave oven. At $3,600—a small fortune for an amplifier at the time—it saw very limited production. Today, a good example is one of the most coveted pieces of classic audio gear on the planet.

The following year, Stax released the SR-Sigmas, top-of-the-line earspeakers that produced a panoramic sound stage never before possible with the genre—thanks largely to a physical design resembling a pair of miniature bookshelf speakers. The Sigmas were best used in private, so ridiculous was the appearance of the listener wearing them. The semi-panoramic Lambda Series followed in 1979, developed in part to meet the exacting requirements of Daimler-Benz for instruments needed to analyze the acoustic properties of automotive interiors.

By the late 1980s, I was living with Stax’s ELS-F81 and larger ELS-8X loudspeakers. The latter were the size of doors and allowed one to achieve a sort of sonic nirvana—imagine Stax headphones writ large. This was a time when LPs were still being spun, but the promise of digital—still in its formative years—prompted Stax to design the Quattro CD player, followed by a monumental digital-to-​analog converter and some colossal monaural amplifiers. Each piece pushed the state of the art to the very edge.

I met Takeshi Hayashi in 1988, when Stax was celebrating its 50th anni-versary and his father, who lived into the early 1990s, was still putting in a full day’s work at the factory. Himself a brilliant designer, the younger Hayashi carried on the Stax tradition of innovation and artisanal excellence. His SR-Omega of 1993 ushered in a new generation of Stax electrostatic headphones, with sound that was stunning for its realism and total freedom from distortion. Announcing the breakthrough Omega, a Stax brochure of the day stated: “We concluded that only headphones, which are totally immune to the sonic variations of listening rooms, can serve as a truly universal audio reference standard monitor.”

Created to complement the Omegas, the Hayashi-​designed SRM-T2 headphone amplifier from 1994 was a sonic triumph—and a colossal failure. Priced at more than $4,500 and limited to fewer than 50 units, it had complicated innards that were prone to overheating and sometimes-fiery failure. The strain this placed on the small company of fewer than 15 employees—exacerbated by internecine disagreements over product development—forced Stax into insolvency, and it closed its doors in 1995.

Remarkably, the small band of employees rallied to revive Stax the following year. The company moved to a new factory in the same prefecture of Saitama, an hour north of Tokyo. Con-tinued development of the original Omega bore fruit as the SR-007 in 1998—an improved version of which, the SR-007/MK2, is still in production to this day—along with other electrostatic headphones and amplifiers. By 2011, the SR-009 had emerged to claim top rung on the Stax ladder. Powered by Stax’s vacuum-​tube SRM-007tII amplifier, the SR-009 produced sound that was unparalleled among headphones. But again, insolvency struck that same year.

Stax was acquired in 2011 by Chinese electronics giant Edifier Technology. While the cost of the acquisition amounted to a rounding error for Edifier, the intellectual property that came with the deal would allow the parent company to explore electrostatic technology. And remarkably, the heavy corporate hand that the Stax faithful predicted would suffocate their beloved brand was never raised. True to its word, Edifier retained the small team of employees and provided them with a new factory in Saitama and the needed resources for greater research and development. Today, fewer than 20 people continue to create products like the SR-L700, the latest high-end Lambda earspeaker, and the SRM-T8000, the long-awaited amplifier designed to fully exploit the SR-009.

Stax’s president, Yoshimoto Nakata, is quite conscious that his team is carrying on a legacy and leadership role in the audio industry. “Stax has come a long way, and we are very proud of our electrostatic audio heritage,” he says. “After Stax was purchased by Edifier, our manufac-turing facilities and sound-​testing equipment have been improved greatly, and the value of our brand has grown worldwide. We will continue to strive for the best sound, driving our electrostatic audio products to a higher level.”

Considering that Stax products from the past four decades are still regularly used and enjoyed by music lovers, it’s hard to imagine things getting much better. But progress and tenacity are the brand’s way, and with just a little luck, a Stax centenary is looking pretty certain.