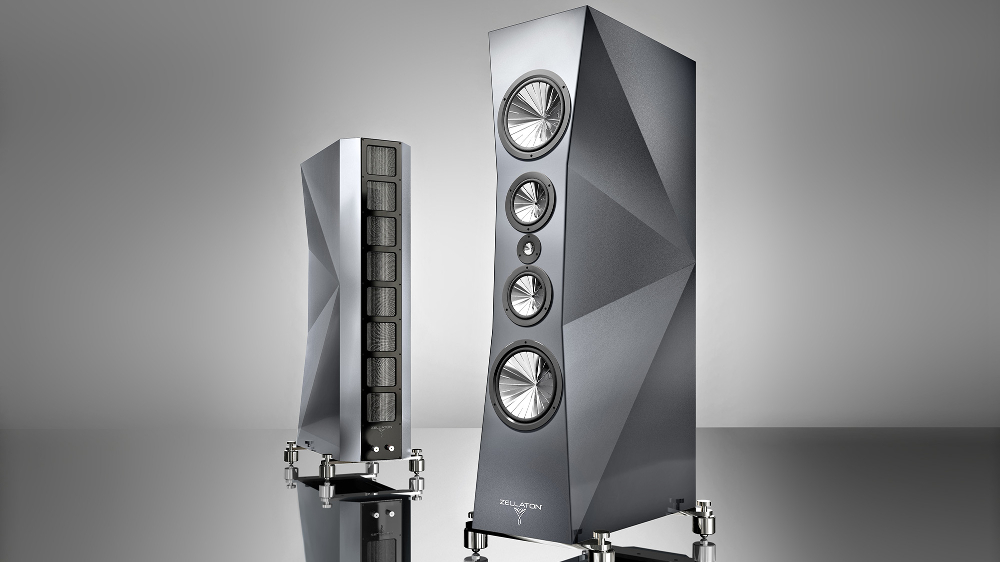 On June 19, 1930, a United States Patent and Trademark Office drawing was filed by engineer Emil Podszus of Berlin, Germany, for a “Sound Reproducing Apparatus.” Podszus’s early sound system was the beginning of the audio manufacturing company known as Zellaton and the foundation of its current innovative line. Zellaton’s new Statement loudspeakers, for example, each use five cone drivers—components that change electric signals to sound waves. Each one of these is designed to reproduce a specific frequency range as measured in hertz (Hz), with a single tweeter handling the high end, a pair of midrange drivers, and two 11-inch woofers to cover low tones. In total, the speakers have a frequency response that ranges from 20 Hz all the way up to a lofty 40 kHz.

The company’s proprietary midrange driver delivers near full-range response from 100 Hz to 8 kHz. Such unfettered bandwidth is a remarkable achievement for a single driver, allowing it to reproduce instruments and voices with a natural ease and complete freedom from artificiality.

The drivers in all of Zellaton’s speakers are handmade in Munich by Manuel Podszus (Emil’s grandson), require up to six weeks to manufacture, and have a build quality on par with a military specification product. It’s no wonder that the Statement’s utterly convincing sound pinpoints instruments and voices with uncanny realism.

Each of the Zellaton Statement’s 771-pound enclosures is nearly six feet in height, but have no fear, this is one piece of tech with a great spouse-approval factor. The speaker’s beautiful matte gray exterior makes a (pardon the pun) statement without being obtrusive, and its faceted cabinet lends some visual interest to equipment that can often be rather staid in appearance. At its size and price—$200,000 per speaker—the Statement serves as an impressive cornerstone for the finest of two-channel audio systems.