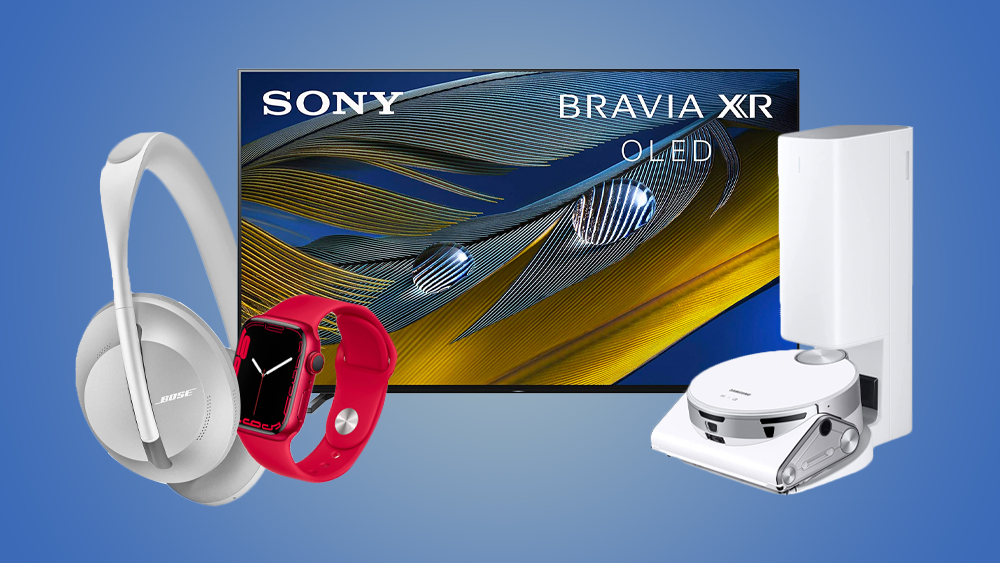 Hard as it may be to believe, another massive Amazon sales event is upon us yet again. This time it’s Amazon Prime’s Early Access Sale. What better reason to make your way over to the online marketplace—which, after 27 years in business, stocks goods across a spectrum of luxury categories—and score yourself a must-have item or three.

Of course, with so many deals on offer over the next two days, it can be hard to identify which ones are actually worth your time. Not all deals, after all, are created equal. Now is your chance to stretch your dollar, whether you’re looking for audio gear, kitchen gadgets or even a brand-new OLED TV.

Luckily for you, we’ve combed through Amazon’s many sales to find the best of the best. Below, 20 items that should be on your radar during Amazon Prime’s Early Access Sale.

The tools don’t make the artist, but a great set won’t hurt either. Anyone who’s serious about cooking knows that having a complete set of knives is essential. This collection of triple-rivet cutlery from Cuisinart—which comes with its own block—has everything you need and more, including utility and bread knives.

They won’t turn heads in the way that a Swiss timepiece will, but there’s no denying that smartwatches aren’t useful. The Apple Watch can’t be beat if you’re already used to the brand’s other products—be it their smartphones or computers. The Series 7 isn’t the latest model, but it has all the features you need at an even friendlier price.

TV displays may be sharper than ever before, but the same can’t be said for their speakers. Because of that, any serious home theater needs a top-quality soundbar.  Like all Bose products, the Soundbar 900 offers premium sound quality, along with Dolby Atmos spatial sound technology and a number of useful extras like voice control.

It’s never too late to become an artist. A digital tablet and stylus make it easy to digitally draw or paint wherever you are. But if you want to take your skills to the next level, you’ll need a canvas bigger than even the 12.9-inch iPad Pro. Enter the Wacom Cintiq 16 and its massive high-definition display. With it, along with the pressure-sensitive stylus, you’ll be drawing things you didn’t think were possible on a digital tablet.

You know what’s nice, especially when the temperatures dip? A nice warm towel. Zadro TLB’s warmer is the easiest way to keep your towels, robes and pajamas warm. Simply toss them in the bucket, set the timer (which has an auto-shutoff feature), and they’ll come out nice and toasty in no time. The brand’s device heats evenly, too, so you don’t have to worry about anything needing more time in the device.

Headphone design has come a long way over the years, but over-ear models can still look a bit clunky. Not this excellent set from Sony, though. They feature a sleek, minimalist design that looks chic. They also offer stellar audio quality, whether you’re listening to your favorite playlist, absorbing your favorite podcast or even talking on the phone.

Who doesn’t like an ice-cold drink? There are few things more annoying than learning you’re out of ice when you need some. NewAir Ice Maker ensures this will never happen. The device can make up to 50 pounds of ice each day. It also makes three different kinds of cubes and has a self-cleaning function, making upkeep a breeze.

Are you a burgeoning oenophile? Then Samsung’s wine cooler could be the perfect home for your growing collection of varietals. It has five smooth-sliding shelves and enough room for up to 51 bottles. But the vital feature—especially if you like to mix it up—are the dual temperature zones that allow you to store your favorite red, white and sparkling wines at their optimal temperature.

Few appliances will make cooking at home easier than a good air fryer. Turn on Panasonic’s device and you’ll be ready to air fry, bake, grill, roast, reheat, dehydrate or toast within seconds. It’s also got a four-quart capacity so you can prepare meals for up to six people at a time.

Need some earbuds to go with your iPhone but hate the look of the ubiquitous AirPods Pro. How about this stemless pair of in-ear headphones from Beats (which is owned by Apple). The Fit Pros have most of their more famous cousin’s features, along with better sound quality and a more secure fit thanks to the built-in ear wings. They also come in more colors, including black, grey and purple.

We’ve all felt the frustration of sitting down to watch a movie and finding it has disappeared from our streaming service of choice. That’s why you might want to have some of your favorite films around in physical form, especially if you like obscure titles. The best all-around format for cinephiles remains Blu-ray, but you’ll need something to play them on. That’s where this excellent player from Panasonic comes in. It’s a must-have for any serious movie lover’s home theater.

Vacuuming is an important step of cleaning your home, but it’s also an activity that can take up a lot of time. That’s also true for mopping. Luckily, this robot from Samsung can handle both for you. It’s equipped a 3-D camera and LiDAR sensors that work with the unit’s AI to create full map of your home. Simply program it and it’s ready to go. Then it vacuums and mops wherever needed. Even better, when the Samsung Jet Bot AI+ get full of dust and debris, it empties itself.

Noise cancellation is essentially a standard feature on premium headphones at this point. Despite this, it can still be hit or miss for most of us—unless you’re using a pair of Bose headphones. The brand’s 700 model boasts 11 levels of noise cancellation to help you block out your surroundings. They also look and feel great. And when you actually do want to hear something, the audio quality is top-notch.

We all have cameras in our pockets now thanks to smartphones. But if you’re serious about photography, you need a dedicated rig to capture all those can’t-miss snapshots. Canon’s camera is compact but has all the features you need—like a 32.5-Megapixel sensor—to shoot like a pro.

Portable speaker makers tend to focus on function over form. Don’t tell that to Bang & Olufsen. The Danish audio brand’s speaker is a device you’ll actually want to show off. It’s also powerful, too, delivering the high-quality audio the brand is known for. An eight-hour runtime on a single charge is also pretty nice.

Want the movie you’re watching to sound as good as it looks? Klipsch has you covered. The brand’s 48-inch-long soundbar can produce 360-degree sound that’s just as good as the audio system your the local megaplex (maybe even better). It also includes a 10-inch subwoofer that’ll prove vital for action film buffs.

A bike makes it easy to get around town. Hurley’s electric model takes things up a notch by adding a 350-watt hub motor that’ll help you reach speeds of up to 20 mph and has a range of 30 miles. Best of all, the battery that powers the motor is integrated into the downtube, giving the two-wheeler a classic and understated look.

Earbuds may be all the rage these days, but sometimes you just want to shut the world out. That’s when you want a pair of over-ear cans to put on and let people know that you’ll be listening to some music for the time being. If you love bass-heavy hip-hop or dance music, the Studio 3 from Beats should do the trick.

If you’re serious about movies (or TV shows or sports) you need a premium TV at the heart of your home theater. You won’t find many better than this Bravia model from Sony, which features an OLED panel and the company’s advanced processing technology that helps it produce a particularly lifelike picture.

Marshall may be best known for its guitar amps, but the company knows how to pack stellar audio performance into a much smaller package. The Minor III earbuds may be compact, but they deliver the kind of pulsating sound you expect from over-ear headphones. They also have a number of convenient features, including intuitive touch controls and 25 hours of playtime on a single charge.