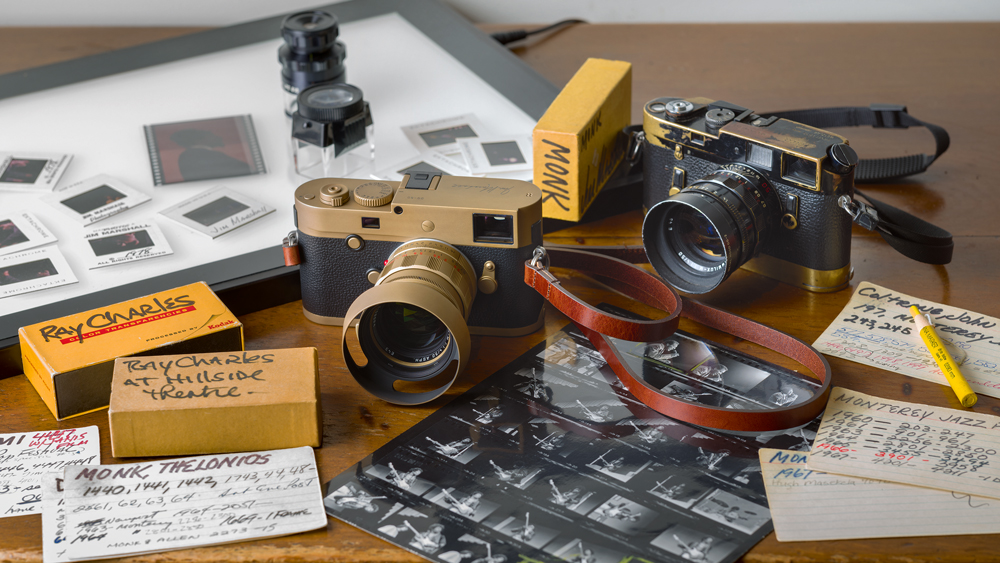 The late photographer Jim Marshall was a true iconoclast with a keen eye, a man who didn’t suffer fools while chronicling the ego-filled world of rock and roll and jazz. Now, fabled German camera manufacturer Leica is paying tribute to his legacy with the Leica M Monochrom Limited Edition Jim Marshall Set.

Priced at $12,950 and limited to 50 examples, the set includes a custom brass-plated M Monochrom camera, a Jim Marshall estate print of pianist Thelonious Monk, and a special estate-embossed copy of Jim Marshall: Jazz Festival featuring many previously unseen images. Although Leica has offered more than a half-dozen special edition M cameras over the years, this is the first commemorating a celebrated photographer.

“We wanted to celebrate Jim with a digital product, but not something that you’d just want to keep on a shelf behind glass,” says Jim Wagner, Leica’s vice president of photo sales for the United States, who adds that Marshall owned more than 20 different vintage Leicas in his lifetime, including a prized M4 he used so much that the black paint rubbed off to reveal the brass beneath.

That visual detail inspired the Leica team to use a special brass-finishing process that “makes the camera look a bit worn out of the box,” according to Wagner. Adding to the retro vibe are classic ‘60s elements such as a knurled focus ring and a round lens hood. The Jim Marshall camera uses Leica’s impeccable Summilux-M 50mm f/1.4 ASPH lens and a Leica Maestro processor that powers still photography as well as high-definition 1080p video.

Befitting its honoree, the limited-edition camera is adorned with Marshall’s signature on the body and is designed expressly for capturing high-contrast, black-and-white photographs. After all, some of Marshall’s most iconic images are black and white shots of Paul McCartney, Jimi Hendrix, and Bob Dylan taken during rock’s psychedelic heyday.

Starting today, shutterbugs can stop by Leica Gallery Los Angeles for Jazz Festival, an exhibition displaying the new limited-edition camera along with Marshall’s own M4 and images from Jim Marshall: Jazz Festival. The exhibit will run through July 31.

“Jim was not only a great photographer, but also a true character,” says Wagner. “He made an impression.” Not unlike the Leica being made in his name.