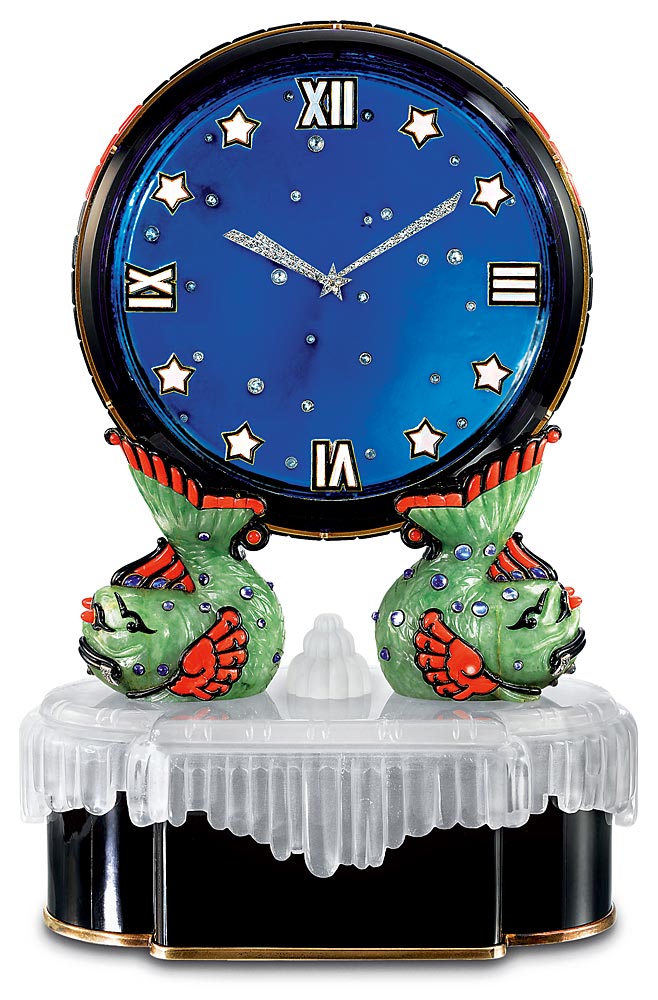 “The mystery clock was made in a time when great artists and craftsmen worked without restrictions,” says Lee Siegelson, owner of the Manhattan jewelry firm that bears his name. “Cartier was making totally unique and imaginative objects to compete at the world fairs—not for commerciality.” This genre of clock—dubbed “mystery” because the hands seem to float inside a dial without a visible connection to the timekeeping mechanism—incorporates many of the design elements of the Art Deco era, such as Asian influences, simplistic lines, and a blending of precious and nonprecious materials.

Maurice Couet developed the mystery-clock movement in France and based his design on a similar clock invented by the 19th-century magician Jean-Eugène Robert-Houdin. Couet’s interest in illusion was bolstered by his solid grasp of mathematics and mechanical principles—subjects he learned from his father and grandfather, both of whom worked for Breguet as regulators of table clocks. He began developing his unusual timepiece at age 17, and at 28 he presented the finished prototype to Cartier.

The prototype was the basis for the Model A. Cartier produced approximately 90 of these mystery clocks, the first of which sold in 1913 to American industrialist J.P. Morgan. The Model A became one of Cartier’s most coveted collectibles during the clock’s peak production, which spanned the years from 1913 to 1930. Each clock required from three to 12 months to complete and drew upon the technical and artistic skills of numerous specialists, including designers, lapidaries, watchmakers, goldsmiths, enamelists, stone setters, engravers, and polishers.

With this gift, Siegelson is offering a Robb Report reader the exclusive opportunity to own Le Ciel, a 1928 mystery clock that Cartier believes to be a one-of-a-kind creation. Recently cleaned and adjusted by a horologist, the clock is said to have been inspired by the Pons-Winnecke comet, which, on June 26, 1927, came within 3.5 million miles of Earth. Diamond-set hands designed to resemble shooting stars move across a face that depicts a night sky of scattered diamond stars. The clock rests on the tails of two carved jade-and-coral koi, and a rock-crystal stream flows atop the timepiece’s obsidian base.

Siegelson, a passionate Cartier collector himself, admires Le Ciel not only for its beauty and craftsmanship, but also for its romantic symbolism. “It represents a clairvoyant moment,” he says. “We often wonder how the universe works; the mystery clock represents both the mystery of this mechanism and time itself.”