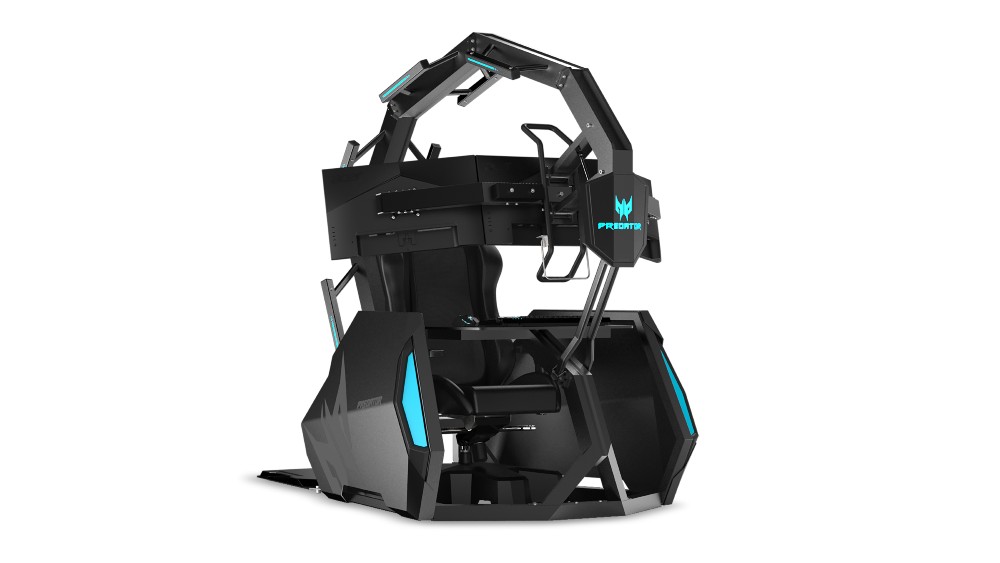 Acer doesn’t think any old chair will do for gamers. That’s why the company is releasing the Predator Thronos Air Gaming Chair, a deluxe seating set-up meant to take gaming to the next level. Unveiled at IFA in Berlin earlier this week, the company’s second gaming “chair” is aimed specifically at hardcore enthusiasts who want to fully immerse themselves in their game of choice, whether that’s Fortnite, Overwatch or League of Legends.

No mere toy, Acer’s gaming chair costs a whopping $14,000. So what are you getting for your five-figure investment? A high-tech gaming cockpit, basically. Constructed out of steel and weighing in at a staggering 715 pounds, the Predator Thronos Air consists of an adjustable chair with a massage function, modular desk and monitor arm, which all combine to form a teal-lit tech cocoon.

It also features three monitor mounts so you’ll be able to see your game wherever you look. There’s an adjustable keyboard and mouse tray, a footrest and a complex cable management system that promises to keep them all hidden from view. There are also plenty of official add-ons available, like cup holders and cameras for live-streaming on sites like Twitch, which gamers can use to customize their rig, though those cost extra.

Amazingly, Acer’s second gaming chair might actually be a bargain compared to its first. Revealed at last year’s IFA, the non-Air Predator Thronos cost a staggering $30,000. But the company’s first attempt did feature a powered recline mode that would tilt the entire rig 140 degrees.

For those looking to create a gaming cave of their own, the Predator Thronos Air will hit the North American market in the fourth quarter of 2019. Acer also plans to sell the chair in Europe, the Middle East, Africa and China. If you have a habit of gaming for hours—or even days—on end, this might be the chair for you.