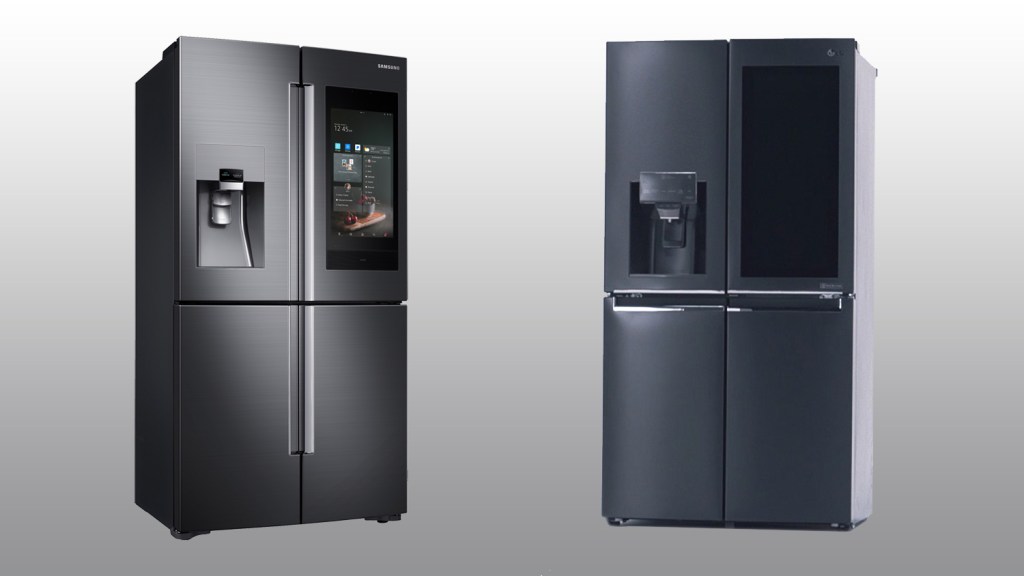 Held annually in January, CES is a great barometer for the upcoming year’s trends—of which there are usually many. (We recently shared the most recent developments in TVs from the show) But this year, the one, all-pervading theme seemed to be the integration of digital assistant AI software into practically everything, allowing companies to use the voice-controlled interfaces to unite their Internet of Things (IoT) devices. Entertainment centers aside, in no room of the home was this proliferation more pronounced than the kitchen—and LG and Samsung are leading the charge.

LG’s big announcement at the show was the introduction of its InstaView ThinQ refrigerator, which employs Amazon’s Alexa digital assistant for voice recognition. Using verbal commands, you can use Alexa to check the weather or your calendar or make shopping lists. The refrigerator can suggest recipes based on the ingredients you currently have on hand, and when you find one you like, Alexa can read it to you as you cook—eliminating the need for fiddling with a smartphone, tablet, or (gasp) even a cookbook. If you don’t need Alexa’s guidance, you can tell it to stream music to the fridge’s built-in Bluetooth speakers.

The InstaView ThinQ’s smart tags feature can be used to input the estimated expiration date of food you store in the fridge—an especially useful tool when you just can’t quite remember if you should toss those Chinese leftovers or chow down. Two taps on the fridge’s LCD panel (which can also be used to leave virtual notes) will make it transparent, letting you see inside the fridge without having to open the door. You can also check live video of its contents via smartphone when you’re shopping at the store.

And while its laundry list of features is fascinating, the thing that truly distinguishes the fridge is its ability to integrate with LG’s other smart appliances, including a range and oven, a microwave, and a dishwasher. This means that once you have selected a recipe via the refrigerator, it can preheat the oven at a specific time. The oven, in turn, can feed information about the food being prepared to the dishwasher, which will then automatically be switched to the optimal cleaning settings for the food that was prepared. Now that’s the kind of futuristic voodoo we’ve been waiting for since the Jetsons.

While LG has thrown its hat in with Alexa, Samsung has chosen to go its own way by integrating its own voice-based AI called Bixby across its product lines. In fact, the company spent more than $14 billion on R&D alone and built four centers dedicated to AI development. They also announced that they were uniting all of their IoT devices under the SmartThings umbrella, an app that will be able to control every compatible device in the home.

At CES, one of the major new appliances it had on display was the most recent version of the company’s Family Hub refrigerator, which now has Bixby built-in. (Check out our impressions of the previous Family Hub 2.0) The fridge has many of the same features as the LG, including remote viewing its contents, the ability to suggest recipes based on current stocks, and fun features like notes you can leave for the rest of the family. It also allows you to create shopping lists, but unlike on the InstaView ThinQ, the items can then be ordered for delivery directly through the device. You can use the Family Hub to interface with your other smart appliances to do things like preheat the oven or control any product in the SmartThings family, allowing you to, say, start your automated vacuum’s cleaning cycle.

While Bixby can do all of the things one would expect from a digital assistant—telling you the weather, the time, reading recipes aloud, etc.—it takes things a step further by generating individual user profiles based on voice. This means that if you step up to the fridge and want to know what you have scheduled for that day, Bixby will recognize your voice and read off your specific calendar information. Bixby can also be used to turn on music streaming services, which will then play through the Family Hub’s built-in AKG speakers. You can also sync the screen with your Samsung Television or stream video to the panel from your smartphone.

So in the end, which smart fridge is a smart bet for you? The Instaview ThinQ’s main advantage is that it takes advantage of Alexa, a standard that is already used in an ever-expanding laundry list of third party devices. That said, you will need to buy LG appliances to take advantage of many of the most exciting features we’ve discussed, such as automatically preheating the oven, so it may be the better option for those mostly focused on actually cooking in the kitchen.

On the other hand, with the Samsung, you are locked in Bixby world. And while third party developers will certainly develop products with Bixby integration, most of the devices that take advantage of it will come from Samsung. Now, that might not prove to be a problem, considering how vast and varied the company’s product lineup is. The Family Hub also differentiates itself with its entertainment streaming options, so if even the primal desire for food is not strong enough to tear you away from binge-watching your favorite show, the Family Hub might be for you.

Pricing has not yet been released for either product, although we do know that the new Family Hub will be available in spring.