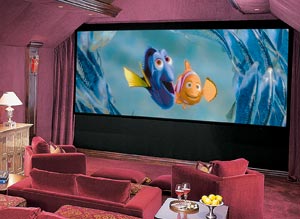 Home theater enthusiasts who read the American Film Institute’s (AFI) 1998 list of the 100 greatest movies ever made may be struck by how few of these films could exploit the capabilities of a top-notch system. Sam Runco, founder of the home theater projector manufacturer Runco International, was not surprised. He acknowledges the divide between great films and great demos. “My favorite movies to watch for video and audio quality and my favorite movies to watch are two different things,” he says, noting that his favorites in the latter category are Cool Hand Luke, Pulp Fiction, The Godfather, and Silverado, none of which he screens in his showrooms. Right now, he prefers Finding Nemo for that task. “It’s almost cheating, it’s so good. It’s a dream demo,” he says of the colorful computer-animated film.

In 1996, as an adjunct to our Best of the Best home theater coverage, we asked a number of experts to name their favorite films to view in a home theater. Four of their selections later appeared on the AFI list: Casablanca, Lawrence of Arabia, Amadeus, and The Sound of Music. DVDs did not yet exist; the 1996 experts were referring to the laser disc versions of the films. Laser discs, which delivered a high-quality picture and extra material, were the connoisseur’s choice. Thus It’s a Mad, Mad, Mad, Mad World won a place on the 1996 list for its inclusion of deleted scenes from the theatrical release. “Laser discs paved the way for DVD,” says Brent Butterworth, editor of Robb Report Home Entertainment, a sister publication of Robb Report. The other three films on our 1996 list were chosen primarily for their demo strengths. Dick Tracy, for example, posed a double-barreled challenge for home theaters. “The colors made the displays freak out,” Butterworth says, explaining that some units experienced difficulty rendering the outline of Tracy’s bright yellow coat. Less able screens suffered from “chroma crawl,” a flaw that made it appear as if worms were crawling along the coat’s edges. The film also contained a scene in which Madonna’s character sings while Mandy Patinkin’s plays the piano. “If the audio technology was inferior,” says Butterworth, “it could make it sound as though the piano were out of tune.”

However, as technology advances and the home theater market grows, coincidentally or consequently, filmmakers seem to be narrowing the chasm between great films and films that look and sound great. Today, along with Finding Nemo, showroom visitors are likely to see scenes from The Matrix or The Lord of the Rings trilogies, movies that are likely to appear on the 2098 AFI list.

“I see few films being made in the future without technical mastery,” says Butterworth. The DVD is also changing the way film directors approach their craft. Butterworth cites George Lucas’ Star Wars prequels as evidence of catering to the home audience. “Lucas includes details that you could not appreciate in a commercial theater, where you can’t watch the scene over again, and you don’t have slo-mo.”

Even if you screen nothing more technically marvelous than Smokey and the Bandit, a superior home theater can elevate the film. “It makes movies you love something you want to watch again and again, and it makes movies you don’t love into something you’ll watch once,” Butterworth says. “When you have a big picture and a good sound system, you’re more wrapped up in the movie. It lets you escape, and that’s why we watch these things.”