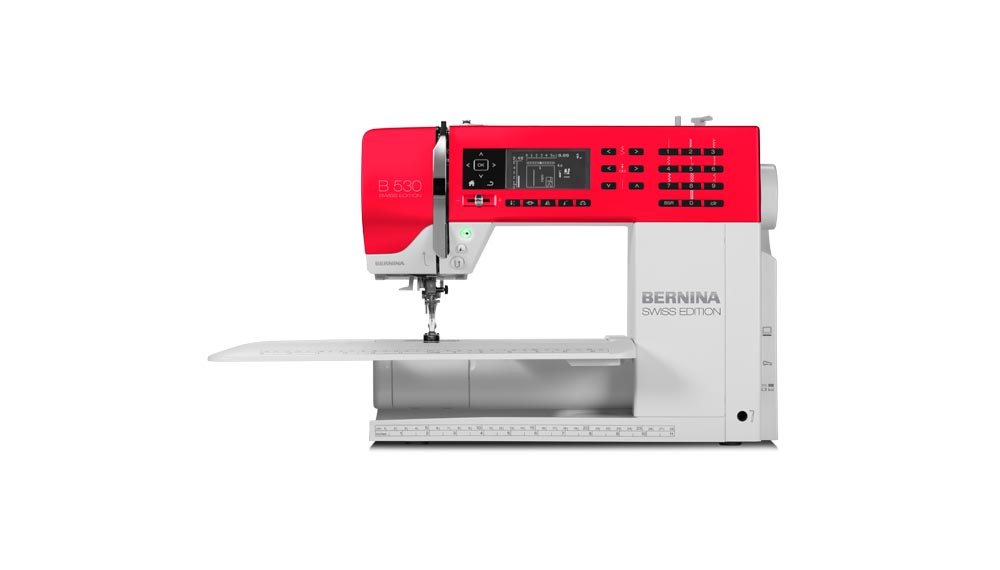 Bernina of America, the premier manufacturer of sewing, embroidery and quilting machines, is pleased to introduce its new Bernina 530 Swiss Edition(B 530 SE).  Available now in limited supply at authorized Bernina Dealers nationwide, the B 530 SE has a Bernina Red faceplate that celebrates Bernina’s Swiss origins, heritage and family tradition.  It includes a wide range of functions and features that Bernina loyalists expect, such as the CB hook, which is the traditional Bernina bobbin system that produces the legendary Bernina stitch quality.  MSRP is $2,999.

B 530 SE owners have the option of adding a Bernina Stitch Regulator (BSR), which provides consistent free-motion stitching, even at high sewing speeds.  The BSR is available alone or included in the new Quilter Accessory Kit, which also includes the Bernina Walking foot #50, Bernina Patchwork foot #37, and a magnifying lens set.  The MSRP for the Quilter Accessory Kit is $1,299.

“The Bernina 530 Swiss Edition is the only Bernina machine to have a Bernina Red faceplate.  It’s a collector’s model that symbolizes an appreciation for quality Swiss engineering and innovation that Bernina is known for,” said Paul Ashworth, President of Bernina of America.  “The B 530 SE also has a full range of features that can be used for simple sewing tasks and more advanced creative projects, with options to upgrade further.  Supplies are limited, so we advise any sewists who are interested in owning one of these collector’s models to visit an authorized Bernina Dealer soon.”

The B 530 SE has a powerful DC motor that gives full sewing power at all speeds to provide consistent stitching on multiple layers and heavy fabrics.  The B 530 SE also includes the electronic foot control, which allows sewists to enjoy consistent speed control plus a heel/tap feature to raise and lower the needle.  It is a mid-priced Bernina machine with a winning combination of quality, features and ease-of-use backed by Swiss precision.  To learn more, visit www.bernina.com/5series.

Founded in Switzerland more than 100 years ago, Bernina is the world’s premier manufacturer with a proven reputation for offering state-of-the-art sewing and embroidery systems, sergers and embroidery software.  Bernina’s leadership is marked by an impressive number of industry leaders, influencers and artisans who chose to partner with the company.  Bernina products are sold in the United States through a network of approximately 450 fully trained independent dealerships.  In 2008, the company introduced the revolutionary Bernina 830, a machine designed to change the home sewing industry.  To learn more and to find a dealer, visit www.bernina.com or call (630)978-2500.