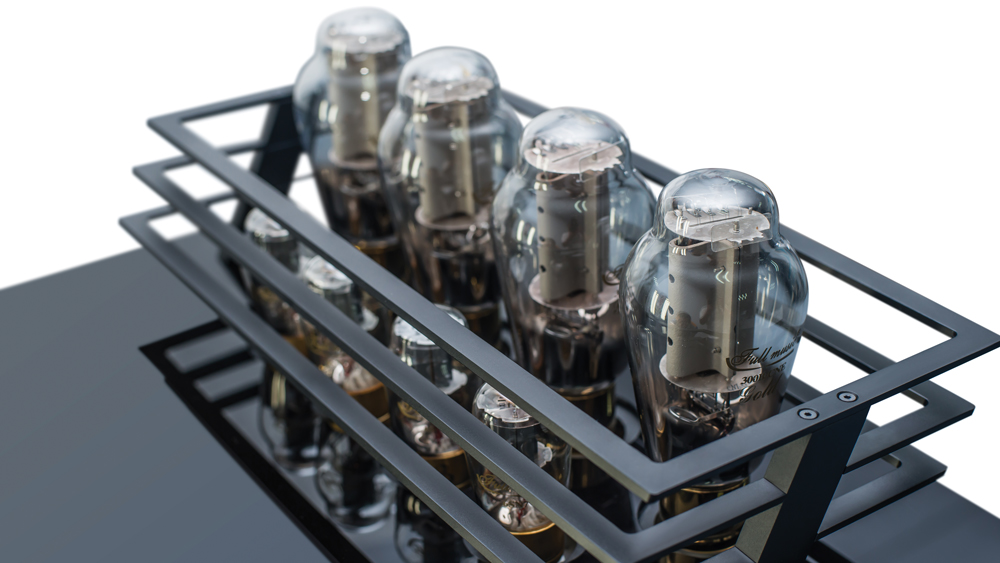 In development for a decade and finally released earlier this year, the Shangri-La Electrostatic Headphone System from HiFiMan is a feast for the audio aficionado’s senses. Known for its planar magnetic headphones and reference-grade portable music players, HiFiMan was founded in 2007 by Fang Bian, whose doctorate in nanotechnology proved particularly useful in designing the Shangri-La. The system’s electrostatic headphone drivers feature an ultrathin, electrically charged diaphragm suspended between two stator panels that push and pull the diaphragm to generate sound waves. Typical diaphragms measure a few micrometers thick, but the nanoparticle-coated film used in the Shangri-La headphones is just 0.1 micrometer—so thin that it cannot be seen from the side by the naked eye. Not to be outdone, the stator panels are made from a fine alloy mesh with individual grates that measure just 50 micrometers thick, which is small enough for sound waves to pass through without distortion.

The Shangri-La’s amplifier uses four custom 300B vacuum tubes to provide voltage to the cans without a transformer—another potential source of distortion. With these rows of tubes protruding from the top of its glossy black cantilevered casing, the amp takes on an elegant retro-futuristic aesthetic that is almost as pleasing as the crystal-clear tones coming from the headphones ($50,000).

While audiophiles often revel in the arcane intricacies of hi-fi, the Burmester Phase 3 makes an unassailable case for simplicity. The complete music system comprises nothing more than a pair of the company’s B15 loudspeakers and a 161 digital all-in-one receiver—both brand-new products available only as part of the Phase 3—that make turning a room into a hi-fi hub an effortless affair.
Based on the 151 MusicCenter that Burmester introduced in 2015, the 161 receiver builds upon its forebear’s outstanding server and playback capabilities with an added preamplifier, 120-watt power amplifier, and reference-grade digital-to-analog converter that can process resolutions as high as 24 bits/192 kHz. An integrated CD player can play media directly from the source or rip it to the device’s 2-terabyte internal hard drive; the receiver also allows playback from USB sticks, home computer networks (via Ethernet or Wi-Fi), and streaming services.

Burmester’s new system is available in a chrome Retro style and black-steel Loft. Both versions feature myriad inputs and outputs to accommodate additional components, but with the Phase 3, even the most ardent audiophiles will find everything they need to just jump in and start listening ($39,995).

LG made a push into the luxury market last year when it introduced its Signature line of premium home products, including a selection of 4K organic light-emitting diode (OLED) televisions.

Initially launched with a 65-inch model, the collection has rapidly expanded to include a 77-inch model, 65- and 77-inch midrange models, and the line-topping 65-inch W7.

Each of the five models features a 4K picture with advanced HDR processing. The W7 stands out for what it lacks: Unlike its sibling sets, which comprise an ultrathin OLED panel attached to a sheet of glass for support, it has no backing of any kind. It is so thin—2.75 mm—and light that it attaches to the wall with mounting magnets. This does reduce its versatility somewhat, but for a bleeding-edge video experience, the W7 can’t be beat—until a new 77-inch version hits stores later this year ($8,000).

Trite though it may be, the adage that good things come in small packages could not apply more resoundingly to the Devialet Gold Phantom. An evolution of the original Phantom that was introduced in 2015, the Gold loudspeaker cranks up the dial, delivering an astonishing 4,500 watts of power and reaching volumes as high as 108 dB (comparable to a typical rock concert) while maintaining a remarkably compact form—in this case just 10 × 10 × 13.5 inches.

Founded in Paris in 2007, Devialet started out producing compact, design-minded integrated amps that garnered high praise from the hi-fi community for their technical innovation. Eight years of research and development and more than 100 patents later, the company completed work on the Phantom, which caught the ears of such tastemakers as Karl Lagerfeld, Jay Z, and LVMH CEO Bernard Arnault, the latter of whom then invested millions of dollars in the company.

The secret to the Gold Phantom’s entrancing audio output lies in its ability to reproduce the same range and depth of sound as loudspeakers 20 times its size, a feat facilitated by proprietary technologies including what Devialet calls Heart Bass Implosion. The technology involves two hermetically sealed woofers that operate under extremely high pressure to generate bone-rattling bass. The unit’s tweeter has also received an upgrade: Now made from grade-1 titanium instead of aluminum, it is capable of reaching frequencies as high as 27 kHz ($2,990).