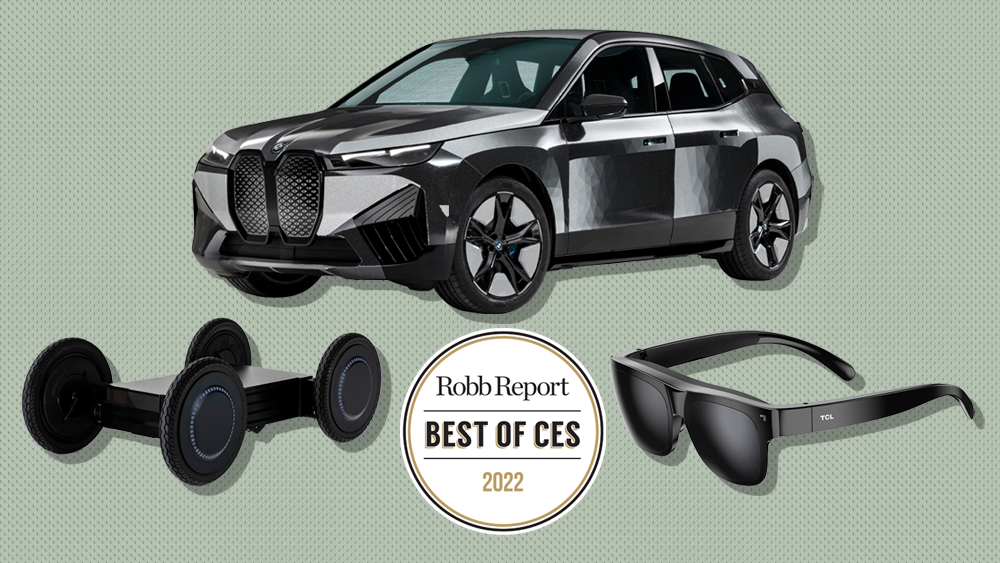 Thanks to the Omicron variant any chance of a return to normal for the Consumer Electronics Show evaporated in a matter of weeks at the end of 2021. But while some brands may have backed out at the last moment, there was still plenty to get excited about at this year’s show. We may not be back at the office yet, and supplies may be still be scarce, but across the technological landscape—from cars to gadgets and gear—innovation is still happening. With that in mind, here are 15 standout products from CES 2022.

The all-electric BMW iX is an impressive EV, but the German marque’s new color-changing technology makes it even more so. The iX Flow Featuring E Ink concept is covered in a special wrap that can change colors with the simple push of a button. Here’s a video of it in action. Amazing, right? Here’s how it works: When an electric charge is applied to the wrap, embedded microcapsules bring different pigments to the surface, allowing the vehicle to take on that color. Right now, the technology can only display black and white, but imagine the possibilities if BMW can find the formula to produce other colors.

LG Display may have figured out a way to make the TV watching experience more immersive than ever before. The brand’s outrageous Media Chair concept is a luxurious recliner with a built-in 55-inch OLED display. The curved screen is positioned just feet away from your head, so you can’t help but take it all in once your in the throne-like device. The Media Chair is also equipped vibrating sound tech, so you’ll also be able to “feel” what you’re watching. If you’re looking for a more traditional viewing experience, the brand’s sister company, regular LG, also unveiled a new series of OLED EX TVs that are brighter and more precise than its other high-definition sets.

Electric cars and trucks may get all the attention, but there’s an increasing number of battery-powered motorcycles popping up. Helping lead the charge is Damon, which has outdone itself with its second bike, the HyperFighter. The range-topping version of the company’s second naked bike, the Colossus, has a drive unit powered by a 20 kWh battery pack that can pump out 200 hp and 148 ft lbs of twist. Thanks to this, it can rocket from zero to 60 mph in less than three seconds, hit a top speed of 170 mph and ride for 146 miles on a single charge. Pricing starts at $19,000 and goes up to $35,000 for the fully loaded Colossus.

Folding smartphones may not have become mainstream yet, but Asus still sees plenty of potential for foldables. The computer company announced at CES that it will release a folding PC later this year. The Zenbook 17 Fold is a massive 17.3 inch OLED tablet that can be used in any of three ways: as a regular tablet, a propped up display or folded in half like traditional laptop. There are still some questions that need to be answered—battery life and cost immediately leap to mind—but this just could be the breakthrough moment proponent of foldables have been waiting for.

Smart faucets are nothing new, but Moen has added an attractive new feature to the mix. Its latest model, the Smart Faucet with Motion, is completely touchless. That’s right, you don’t need to lay a finger on its handle. In fact, there is no handle. Instead, you’ll use gestures—including swipes and push motions—to control both flow and temperature. As with the brand’s previous smart faucets, the new model, which will initially be available in two styles, includes voice activation and can be customized using the company’s Smart Water App. The Smart Faucet with Motion will go on sale this spring and starts at $699.

There are portable projectors and then there’s the Anker Nebula Cosmos Laser 4K projector. The company’s latest pick-up-and-go model includes everything you need to watch movies wherever and whenever you want. It can produce 4K images at 2400 ANSI lumens, which is more than bright enough for outdoor viewing, and also includes built-in 30-watt speakers so you can hear dialogue clearly. There’s also a dongle you can connect so you can stream movies, TV shows or vlogs from your phone. The all-in-on projector launches on Kickstarter next week and will cost $2,199 with deliveries expected later this spring.

The accessories specialists at Razer want to take gaming desks to the next level. Enter Project Sophia, a modular desk concept with space for 13 different components. If you’re serious about gaming, the fully customizable setup has room for everything you could need, including media controls, monitoring consoles and wireless chargers. At its core is an Intel processor and Nvidia GPU (which can be upgraded, if needed) and a built-in 65-inch OLED monitor. Razer doesn’t have the best track record when it comes to putting its more outrageous concepts into production, but last year’s air-purifier is now for sale, so there’s hope for Project Sophia.

The press materials for Cadillac’s latest concept, the Innerspace, make no mention of what it is like to drive the futuristic vehicle. There’s a good reason for that: It drives you, rather than the reverse. The spaceship-like Innerspace is a completely autonomous vehicle that will allow you to travel in complete comfort. Its low-slung cabin, which was room four two, was designed with “space and serenity” in mind. It includes comfortable seating which you can recline in, ambient lighting and a wrap-around LED screen which you can use to watch entertainment or wellness-themed programming when you want to be distracted from the world you’re traveling through. Think of it as your own mobile spa lounge.

Some like to play amateur bartender at home; others prefer to have their drink made for them. If you’re in the latter group, Black + Decker is here to help. The company’s newest device, Bev, is basically a Keurig machine for cocktails. Load up the machine with five 750 mL bottles of spirits, toss in a Bartesian cocktail capsule with juice and bitters, and it will make you the drink of your choosing and pour it into your glass (it immediately washes itself out after, too). It’s not the most stylish device, but $300 (plus $15 per six-pack of drink pods) is a relatively small sum to pay for a home mixologist that never sleeps.

Gaming gear tends to look, well, ugly—if we’re being kind. Samsung’s next-generation, the Odyssey Ark, is here to buck the trend, though. The ultra-thin, curved 4K monitor looks like something out of the future. Specs are still scarce—we don’t know its refresh rate, for example—but the 16:9 display measure 55 inches, making it the company’s biggest gaming monitor. Even better, it can be used either horizontally or vertically. It will also feature a multi-view mode that will adapt the display for whatever you’re viewing, whether it’s a game, movie or your latest binge-worthy series. Pricing hasn’t been announced yet, but don’t expect this kind of gaming tech to come cheap.

Sony may be best known for its home electronics, but it looks like the company has its eyes on something bigger: the EV market. At this year’s CES, the brand unveiled its second battery-powered concept, the Vision-S 02 SUV. The vehicle, which is similar in shape and size to the Tesla Model Y, has a dual-motor powertrain that can produce 536 hp and features loads of sensors for its Level-2 driver assistance system. The SUV and its predecessor, the Vision-S 01 sedan, may be concepts, but don’t be surprised if they eventually make it to production. The company also announced the formation of a new division called Sony Mobility at the show.

Hyundai’s latest robot isn’t the most impressive looking—its just a platform with four wheels attached—but its mighty capable. The Mobile Eccentric Droid (MobED) has a complex and precise suspension system that allows it to keep anything on its platform level—even when traveling over challenging surfaces, like gravel or ramps. Thanks to this, it can carry a tray of stacked Champagne glasses without spilling or a stroller without disturbing the baby inside. Best of all, it looks like the MobED might eventually go into production.

Imagine watching your favorite movie on a 140-inch screen without having to have a 140-inch TV on your wall. That’s possible with TCL’s new pair of display glasses, the Nxtwear Air. Simply pop the headset on, plug it into your phone and you can recreate the big screen viewing experience anywhere. This isn’t the first pair of display glasses—which make use of micro-LED technology—to hit the market, but they’re definitely the first we’d actually consider wearing. Not only are they 30 percent lighter than their predecessor, the Nxtwear G; they’re also more stylish.

We all know how relaxing a nice warm bath can be, but it can also take time to get everything just right. Kohler’s new PerfectFill technology has just made the process significantly easier. Perfect Fill, which includes a drain kit and digital valve, allows you to draw a bath to your desired temperature and depth with a simple voice command. You can also use the Kohler Konnect app to set different times for you and everyone else in the family. Bath time just got a lot easier.

Anyone who’s ever had a pet run away knows how painful and scary the experience can be. Luckily, Invoxia is here to help. The startup’s new Smart Dog Collar will help you find Fido, if they go missing. It uses GPS to track your pal and features a Lost mode to help reunite the two of you as quickly as possible. That’s not all the collar can do, though. It’s also loaded with sensors that will help monitor your dog’s health, including heat and respiratory rate, as well as they’re sleeping. The device records all the data, too, so you can share it with a vet if needed.