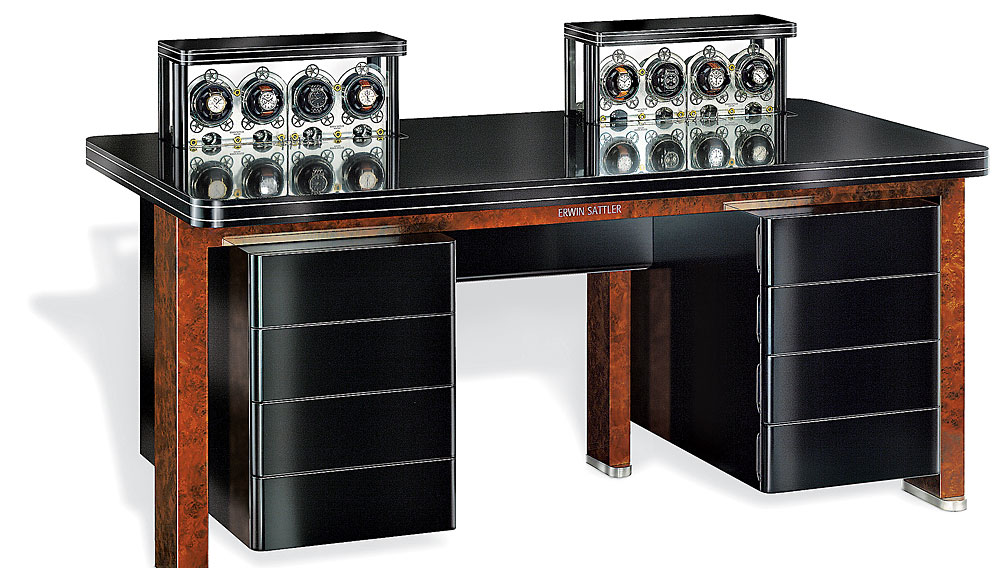 Scott Slavis, a Las Vegas–area watch collector, recently acquired a massive clock and watch winder by the renowned German clockmaker Erwin Sattler. This imposing piece is encased in a desk and contains multiple banks of computer-controlled winding units that rise on command from the desk’s surface.

“I had five or six people come to my house just to set the thing up,” Slavis recalls. Of course, for this avid collector the effort was worth it. He is one of a growing number of individuals who prize horological objets—large, technologically sophisticated pieces created specifically to occupy a place of pride in the home. These collectors love watches, but they feel somewhat limited by the fact that personal timepieces can be enjoyed only by the wearer and a few others in the immediate vicinity of an adorned arm. They prefer to make grander statements of style with pieces that can be shared with groups of admirers. “The way I have this clock set up, it looks as if the whole house was built around it,” says Slavis enthusiastically.

Visually arresting clocks and watch winders like the one in Slavis’ home garner a certain amount of prestige for the companies that make them. But the buzz these pieces generate among customers and in the industry comes at a price: The design and manufacture of such incredibly complex mechanisms create technical demands many of these companies never anticipated. For example, Jaquet Droz is taking several more years than it originally planned to complete the much-discussed Time Writing Machine, a mechanism of 1,200-plus parts that actually writes the time on a piece of paper. “This was an absolutely enormous undertaking in terms of time and money,” says Jaquet Droz’s CEO, Manuel Emch. “It was very rewarding, but it will be some time before we take on a similar project.”

And yet, despite the challenges they present, curious projects like the Time Writing Machine have long proven irresistible to horologists. In Europe, today’s most innovative watchmakers stand on the shoulders of 18th- and 19th-century artisans who built technically complex clocks, often on a very lavish and public scale. The 18th-century watchmaker Abraham-Louis Breguet, for example, is famous for his “sympathique” clocks, which could be synchronized with an attachable watch. Since Breguet’s era, horological objects of virtu—like the well-known Cartier mystery clocks of the early 1900s or the remarkable Atmos clocks from Jaeger-LeCoultre—have appeared sporadically.

The recent surge in watch collecting has prompted companies that make timepieces to think of ever more impressive ways to attract top clients. In 2007, Richard Mille moved beyond wristwatches to offer the Planetarium Tellurium clock, a grandiose presentation of the complex movements of the inner solar system that also incorporates a perpetual calendar. With its precise gear ratios and a low-friction detent escapement, it is one of the most accurate clocks ever built. But unlike many other modern objets, this piece was never intended for sale; it exists solely as an expression of Mille’s creative vision and his technical team’s mechanical virtuosity.

However, numerous timekeeping objets created for commercial purposes embody many of the same impressive qualities as Mille’s work. Ulysse Nardin’s long relationship with horological savant Ludwig Oechslin has yielded a number of wristwatches built in an astronomical format similar to Mille’s Planetarium Tellurium, including the well-known Trilogy of Time series introduced in 1985. In fact, the original prototype for Astrolabium, the first piece in the series, was a full-size wall clock. Responding to a request from one of its prominent Swiss customers, Ulysse Nardin decided to develop another of Oechslin’s ideas: a timepiece that visually tracks the movements of the sun and moon in relation to the earth. “Ludwig was very specific about his ideas for the aesthetics of the piece,” says Patrik Hoffmann, Ulysse Nardin’s president in the U.S. market. “It was his idea to depict the earth as a sphere on the outside, with the sun, moon, and dragon hand [tracing the path of lunar and solar eclipses] on the inside.” Planet Earth ($339,392), a piece with a wooden base, will be offered over several years in a limited-edition series of 99.

Ulysse Nardin is relatively new to the objet market. Its competitor Jaquet Droz has a more colorful heritage in this arena. In the 18th century, the company’s namesake built watches and automata—humanoid dolls that could move and perform functions thanks to highly complex internal mechanisms. These early robots live quietly now as museum pieces, but in their day, they disturbed the pious; legend has it that Droz was suspected of practicing witchcraft. “The most famous automaton Droz ever produced was known as the Writer, which could literally write 40 different letters and figures through a system of cams,” says Emch. “We wanted to produce something that created the same powerful emotions as the original, but updated for our time.” The company therefore decided not to create a traditional automaton with a human form, but rather a purely mechanical piece that emphasized technological complexity. The Time Writing Machine ($341,000) will offer the perfect confluence of its manufacturer’s histories in watchmaking and automata. The extremely complex assembly of more than 1,200 components literally records the time by writing it on a small sheet of paper. The mechanism uses a cam system similar to the one Droz developed to translate the time into the movement of a pen along three axes. This moving pen writes numerals—the current time—on paper. The complexity of the Time Writing Machine’s design becomes evident as all of its parts move during the 22 seconds it takes to complete the writing process.

Swiss watchmaker Perrelet, by contrast, decided to take a simpler approach. Its new limited-edition Maestro Edition ($46,000) is essentially a combination of the company’s two acoustic watches—an alarm watch and a five-minute repeater—housed in a lacquered cabinet that conveniently contains a sound system. The top of the cabinet also has a watch winder. Beyond the obvious appeal of the two watches, both produce excellent sound.

Perrelet and its competitors are basing their decisions to venture into the growing objet market in part on an assumption they make about watch collectors. These individuals, the conventional wisdom goes, love nothing more than to admire their prized pieces in the comfort of their own homes. Scott Slavis agrees. “It’s nice to come home and see this work of precision,” he says, referring to his Erwin Sattler clock and watch winder. “It’s a very soothing feeling.”