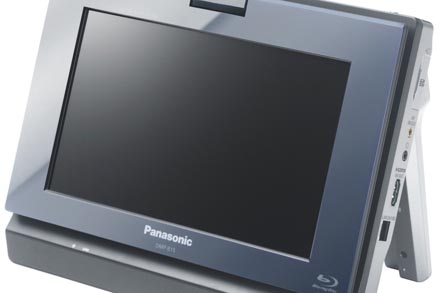 High-definition Blu-ray Discs have, to date, been under a sort of house arrest. A few high-powered laptops excepted, no portable device could play Blu-rays, so loading up a few discs to keep the kids entertained on a long trip was a futile exercise. Fortunately, Panasonic has just announced the DMP-B15, the first portable Blu-ray player. The DMP-B15 plays Blu-ray Discs and DVDs on its 8.9-inch LCD screen. The screen can be folded out laptop-style, as with a typical portable DVD player. It may also be swiveled around so the unit stands up on a tabletop. The DMP-B15 includes Panasonic’s Viera Cast feature, which accesses Internet video sources such as Amazon Video-on-Demand, YouTube, Bloomberg News Service, and Google’s Picasa digital-photo-management service. Panasonic say the DMP-B15 incorporates the same video technologies found in the company’s home Blu-ray players—including BD Live, which allows the user to enjoy special interactive features found on many of the latest Blu-ray Discs. It can also be connected to larger screens. The DMP-B15 will be available in May for a price yet to be determined. (800.211.PANA, www.panasonic.com)