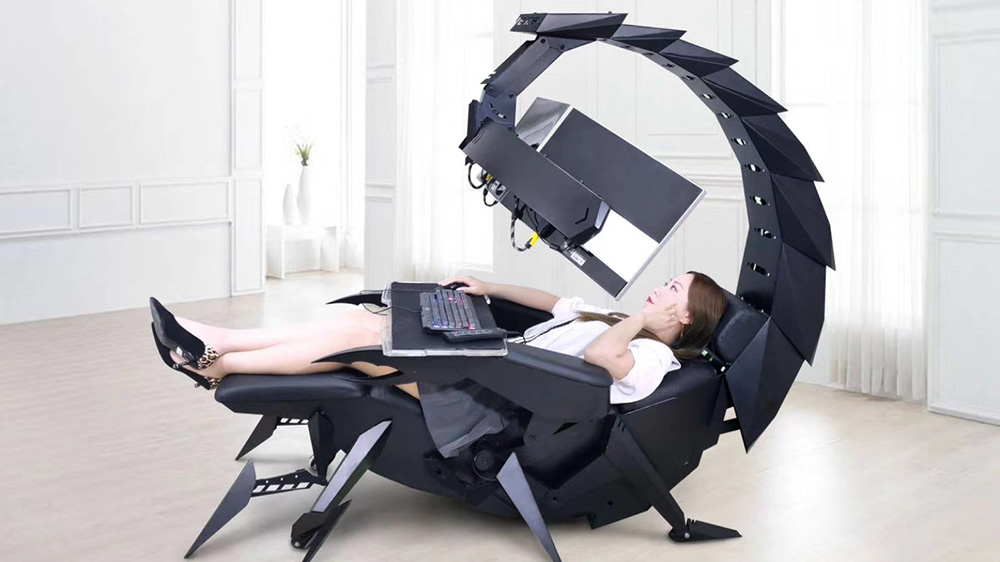 In the early days of computer gaming, all you needed to play Doom or Diablo, aside from a powerful PC, was a desk and a chair. But in the era of Call of Duty: Modern Warfare and Fortnight, gaming set-ups have become as sophisticated as the games themselves. Now a new throne-like chair from Cluvens takes things to a new level.

The computer peripheral company’s new gaming cockpit features the same cyber punk aesthetic that’s come to dominate the industry, but it adds some arachnid-inspired flair to the mix. The resulting zero-gravity chair, which doubles as an over-the-top computer workstation when you’re not blasting aliens, looks just like a giant scorpion.

True to its appearance, the chair is named—what else—Scorpion. Every aspect of the angular rig, from the adjustable monitor mount to the arm rests to its eight legs, was designed to look like it comes from the arachnid. And the design isn’t just for show. Each of the scorpion-inspired pieces has a distinct purpose that makes gaming easier and more comfortable.

Instead of carrying venom, the tip of the chair’s tail can be used to mount an array of up to five flat screens (between 19 and 32 inches) or one super-wide display up to 49 inches. Meanwhile the tail has six different “pose” settings, the last of which allows users to lay in a zero-gravity position, reducing stress on the neck and back during even the most intense gaming marathon. The company claims the most uncurled setting, is also good for napping, should you need some shut eye after a long session.

Other features touted on Cluvens’s website include a massage function, heated backrest and LED lighting, in case you want the chair to be even harder to miss. One thing to note: You’ll need quite a bit of space to fit the Scorpion.  It measures 65 inches long, 47 inches wide and 82 inches tall when its tail is fully upright. It also weighs in at a hefty 265 pounds.

If you want to inject your gaming room with over-the-top scorpion energy, it’s hard to think of a better cockpit choice than Cluvens’s offering. The chair retails for $3,299, though Gizmodo points out you can score one for $1,900 (plus $1,100 for shipping) on Alibaba. And if that’s still not enough chair for you, you can always level up with Acer’s equally extravagant $14,000 Thronos gaming chair.