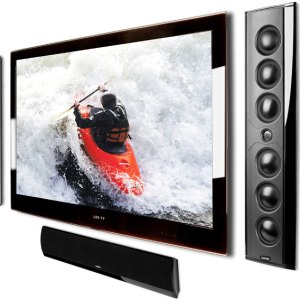 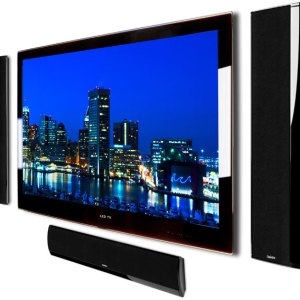 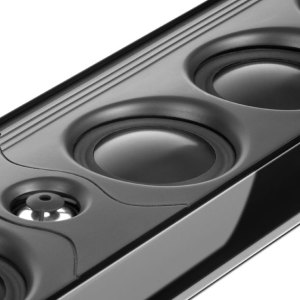 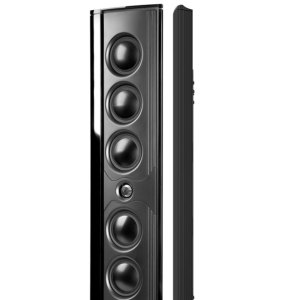 The problem with the minuscule depth of TVs from today’s leading manufacturers—the profile of Samsung’s new top-of-the-line Series 9 LED-backlit models measures less than one-third of an inch—is that mounting relatively bulky hi-fi speakers beside them taints the panels’ remarkable thinness. Luckily, the designers and engineers at Definitive Technology have conjured an ultrathin solution that does not abandon audio fidelity.

Def Tech’s Mythos XTR-50 speaker, which started shipping in March, has a mere 1.5-inch depth when mounted on the wall and reproduces audio to befit the high-definition picture of today’s best display panels. Though the XTR-50 is a single-speaker model (priced at $700 each) Def Tech imparted it with such a versatile design that it is able to serve as a right, left, center, or surround module by simply adjusting the speaker’s on-wall orientation and rotating the magnetic Def Tech logo accordingly. Each speaker weighs a bit more than five pounds, and its hand-polished aircraft-grade aluminum cabinet furthers the sleekness of its appearance while providing a rigid enclosure virtually free of resonance.

Although the XTR-50’s thinness is certainly its most appealing attribute, the team at Def Tech has implemented a number of innovations to achieve this feat while maintaining the audio-reproduction quality for which the Maryland manufacturer is known. One such novelty lies in the fact that Def Tech utilized catenary geometry in the design of the XTR-50’s drivers. This engineering tack maximizes the stiffness of the dome-shaped driver diaphragm, which is composed of lightweight anodized aluminum, while minimizing the amount of material required to make it. Even with its unobtrusive low-mass design, the XTR-50 produces extraordinarily potent audio output by way of its six 3½-inch drivers arranged in a linear array: one driver on either side of a one-inch pure aluminum dome tweeter handling mid-range frequencies, and two on either side of those governing low-end frequencies to enable a total response from 92Hz to 30kHz. Pair a XTR-50 setup with one of Def Tech’s powerful SuperCube subwoofers for a complete home-theater speaker system ideal for living rooms, bedrooms, and offices. (410.363.7148, www.definitivetech.com)