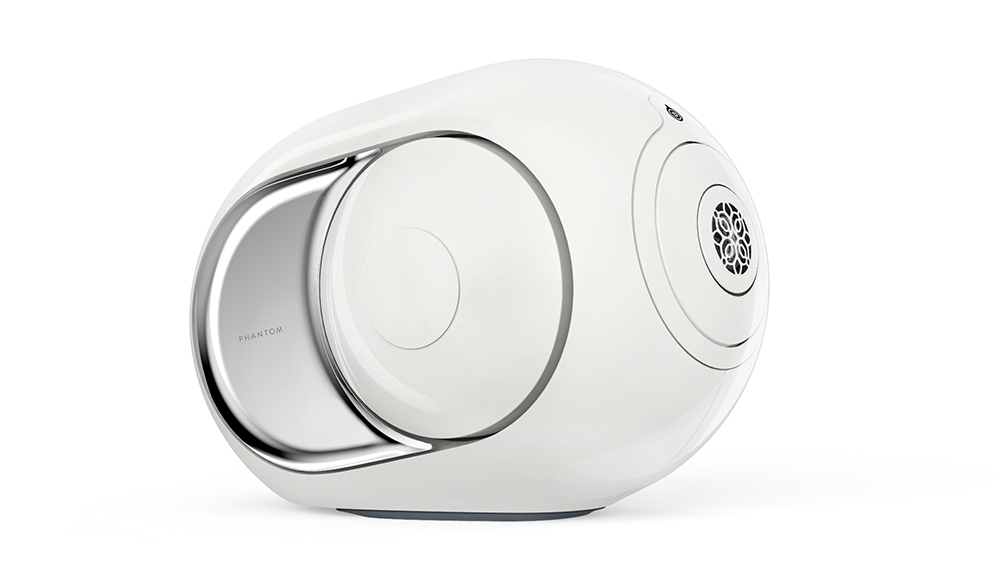 The striking Phantom by Devialet wireless audio system makes a statement in any room. It is not just loud for a speaker that could conceivably fit on a shelf, but loud for any speaker—period. The compact music system has been called a Sonos killer, and indeed its sound does far surpass that increasingly ubiquitous unit—at $1,990 to $2,390 per Phantom, the killer part of that equation is questionable. But if the pods battled to the death on the basis of sound alone, the Sonos would be slaughtered.

If it is long on sound, the Phantom is also long on personality. The French company Devialet—known for its svelte and powerful amplifiers—calls it the world’s first cybernetic sound system, which gives the impression that it has engineered some sort of artificially intelligent robot speaker. That impression continues when the power button is pressed and the speaker comes to life by wiggling its “ears,” actually two woofer covers hermetically sealed under high pressure to produce a whomping bass response.

The ultramodern looks—sci-fi, almost—might be at home in many environments, but the overall takeaway that you are living with a Stormtrooper larva in your living room may not be for everyone. It does have its ardent admirers, though. The Parisian retailer Collette replaced its in-store sound system with Phantoms (up to 24 units can be networked via Wi-Fi through Devialet’s Dialog hub); the designer Karl Lagerfeld purportedly bought 20 of them; and LVMH’s CEO Bernard Arnault, whose wife is a concert pianist, became so impressed after hearing a Phantom demonstration that he invested millions in Devialet.

Despite its minimal exterior—the only control on the actual unit is the power button; everything else is run through an app—the technology behind the sound is complex, with nearly 100 patents involved in the creation of the Phantom. The most notable innovation might be Devialet’s proprietary ADH (Analog/Digital Hybrid) amplification system, comprising an analog amplifier connected in series with several digital amplifiers. With the assistance of the class D amplifiers, the class A is relieved of much of its workload, which prevents the unit from becoming too hot (though it definitely warms up), but still allows the handling of up to 3,000 watts without distortion.

The Phantom’s unorthodox shape—akin to a large, very heavy, robotic rugby ball—is defined by the need to maximize the bass frequency generated under high pressure, which Devialet calls “implosive.” The air pressure inside the speaker unit is 20 times higher than that in a conventional speaker box, according to Devialet’s research. In decibel sound units, this pressure is equivalent to 174 dB SPL—the sound pressure level associated with a rocket at launch. The woofer faithfully reproduces the low range down to 16 Hz.

The sound is beyond dense with the mid and high ranges sticking together, launched out of the front of the Phantom’s “face.” The bass, which emanates from those Mickey Mouse ears (which throb and vibrate with each beat), is something you feel in your chest and could fill even very large rooms. The power and range of the small unit is impressive, but, befitting the strong aesthetic, is also not very subtle or nuanced. Still, its clarity and volume are amazing. (devialet.com)