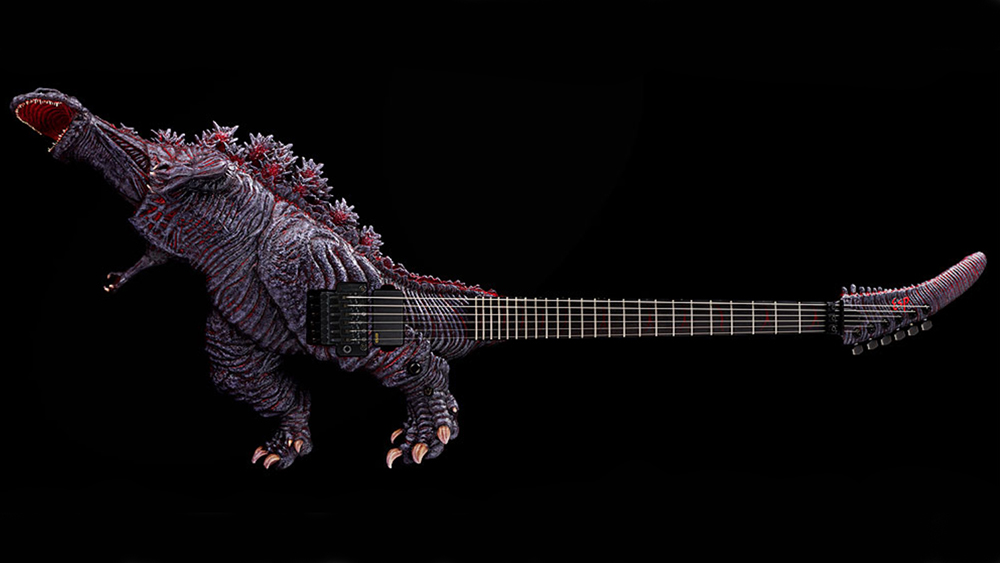 How do you celebrate the Godzilla’s 65th birthday? If you’re guitar maker ESP, you pay tribute to the King of Monsters with an extremely limited-edition guitar that just might be the world’s most expensive novelty instrument.

In honor of everyone’s favorite kaiju hitting retirement age, the Japanese-based manufacturer will produce a limited run of five officially licensed axes inspired by the 393-foot-tall monster. The Godzilla Guitar is based on one used by Toshihiko Takamizawa, the frontman of Japanese rock act The Alfee. Coincidentally, Takamizawa is the same age as creature formerly known as the God of Destruction.

ESP’s guitar features an Adler body sculpted to look just like the Godzilla that appeared in the last Toho-produced film in the franchise, 2016’s Shin Godzilla (or Godzilla: Resurgence), and features the creature with its mouth agape about to let loose another terrifying scream. It features a 24-fret, three-piece maple neck meant to resemble the monster’s long tale, an ebony fingerboard, Floyd Rose bridge, Gotoh tuners and an EMG-85 pick-up. If all that weren’t enough, the guitar also features a switch that turns on a series of purple LED lights throughout the instrument, including the fretboard, that makes the guitar look as if Godzilla is about to unleash its patented “Atomic Ray” blast.

Of course, a rare guitar celebrating such a momentous occasion comes at a price. A steep one. Each of the guitars sells for ¥5,550,000 (about $52,000) through the official Godzilla web store, although shipping is free. Click here to put in an order for yours before the September 30 deadline.

Since appearing in Ishirō Honda’s classic 1954 film, Godzilla, Japan’s biggest pop culture export has gone on to appear in 36 films, 32 of which were produced in its native country, the rest by Hollywood. The latest film in the franchise, Godzilla: King of Monsters, came out this May and went on to make over $383.8 million worldwide. Check out more photos of ESP’s guitar below: