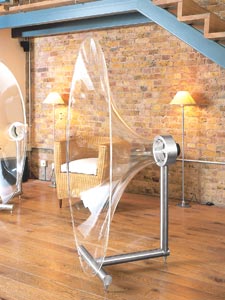 Ferguson Hill (+44.20. 7284.0969, www.fergusonhill.co.uk) is already planning at least one cosmetic improvement to its new FH 001 transparent horn loudspeaker. The London company is going to add illumination along the speaker’s 6-foot-tall, 3-foot-wide oval rim. “We’ve had reports of people walking into it and earning a nasty bump on the head,” says Simon Kynaston, distributor for Ferguson Hill. “But,” he adds with a smile, “at least it proves that the stand is secure.”

The FH 001, which sells for about $18,000 a pair, might go unseen by some, but not unheard. A modified Lowther DX3 drive unit—a favorite of audio cognoscenti—is mounted in the acrylic horn, which was designed and manufactured using technology borrowed from the aircraft industry. As with most horns, the FH 001 needs little amplification and requires a subwoofer to reproduce the lowest frequencies. Ferguson Hill plans to offer its own matching subwoofer and amplifier within the next year.