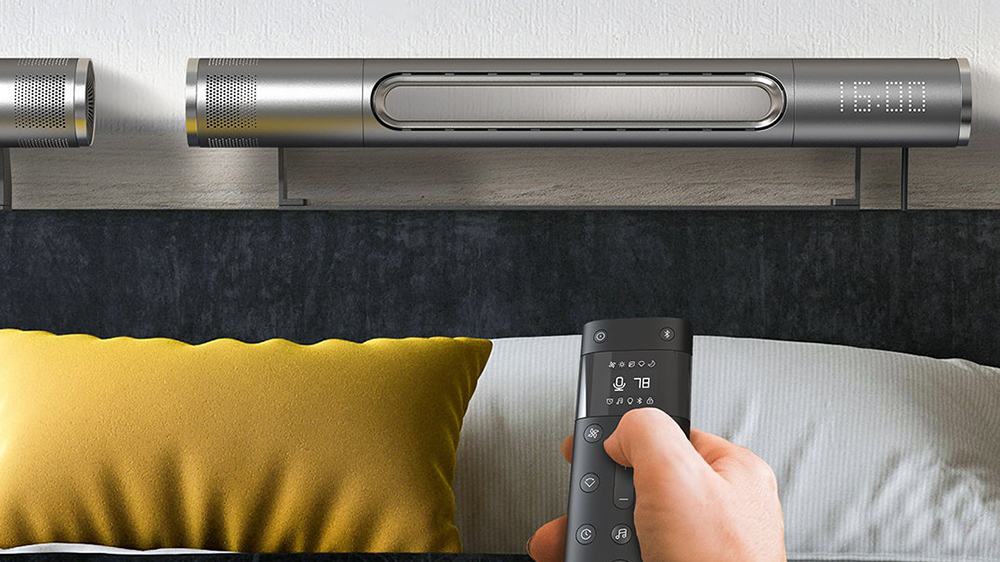 Tech start-up “accelerator” Haxson has unveiled what it’s calling the “world’s first smart fan.” The new bladeless device, dubbed the AirFan, is designed to do far more than just blow air around the room. According to the company, it will be able to cool you down or warm you up, filter out air impurities, play your favorite music, help you make phone calls from bed, and even make sure you get up on time in the morning.

Of course, it all begins with the air. The cylindrical AirFan, which is designed to sit above your bed’s headboard, has an open chamber that allows for both cool and warm airflow at 10 different speed levels. It also uses a three-step filtration system that Haxson claims will remove 99.9 percent of airborne virus particles from the air. (Not a bad feature to have during a certain global pandemic.) This includes the use of a UV-C lamp to keep the filter clean, HEPA H13 and carbon filters to capture particles, and an ionizer that produces negatively charged ions to trap dust, bacteria and other allergens. Ask your Dyson to do that.

Beyond its impressive climatizing capabilities, the AirFan’s smart features will conspire to keep you in bed. From the Bluetooth speaker, you can listen to music or make phone calls without using headphones. The device can also be paired with Amazon’s Alexa and Google Assistant. If you’re in an other area of the house, a remote control that will let you control the fan from any room. Oh, and if the bed is not where you need a fan, it can be mounted—either horizontally or vertically—anywhere you like.

For those that do choose the bedroom, the embedded digital clock, which sits to the left of the air chamber, has adjustable light levels and three alarm settings, including a sunrise alarm that allows for a calming start. There’s also a dimmable night light in the center chamber that gives you a seamless alternative to reading lamps or clunky book lights. And when you’re really ready to turn in, “Sleep Mode” will slow the fan’s speed while generating a clean breathing zone to optimize your rest.

The Haxson AirFan is now available for early bird pricing at $199 on Kickstarter. According to the company, the crowdfunded product is now ready to go into production. As of writing, the campaign has brought over $1 million dollars in pledges with 49 days left. Not a bad start for the world’s first smart fan.