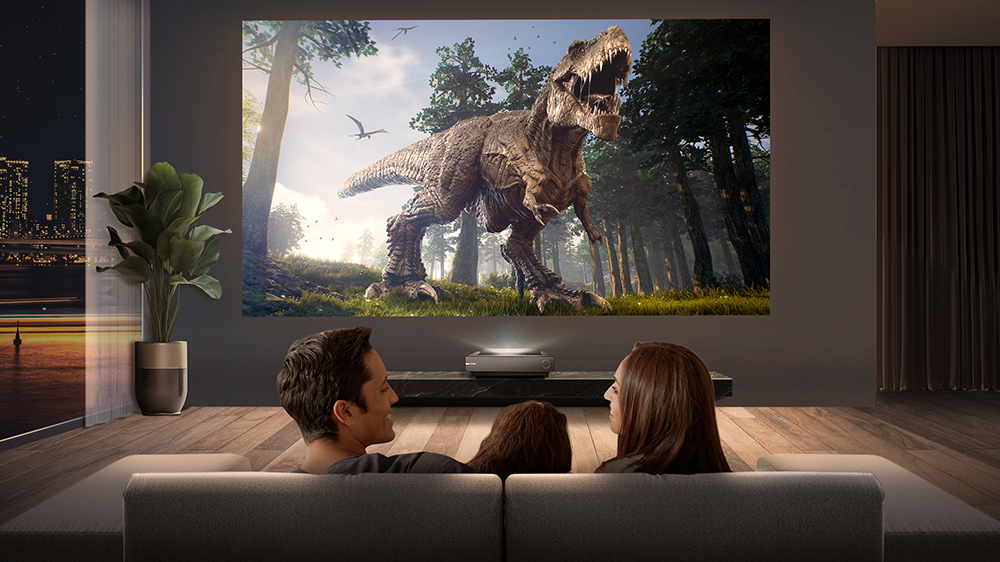 Hisense wants to help you create a home movie theater with one, 20-pound box.

The Chinese electronics outfit has unveiled a new ultra-short-throw projector that is designed to deliver a high-quality cinematic experience without hogging space in your abode. The PX1-PRO TriChroma Laser Cinema, which was first teased at CES earlier this year, combines Hisense’s award-winning TriChroma laser engine with a newly developed digital lens focus system to create a razor-sharp image with impressive depth and detail.

The streamlined projector, which sits neatly on an accompanying stand, can throw a picture spanning up to 130 inches (diagonal) while just a foot from the wall. Using pure red, green and blue lasers, it is able to create vibrant colors with deep contrast. Furthermore, it brings 4K ultra-high-definition resolution via some 8 million pixels for clarity and 2,200 lumens peak brightness for crisp definition even in well-lit rooms.

The fast 60Hz refresh rate, meanwhile, ensures images are smooth, clear and lag-free. There’s even a special gaming mode that detects when a console is connected and then automatically adjusts the projector settings to optimize game performance. Similarly, filmmaker mode fine tunes settings on the fly to make sure your chosen movie is projected exactly as intended.

To top it off, the projector is fitted with a built-in 30-watt Dolby Atmos soundbar that promises quality audio. There’s also an HDMI port through which you can connect your own surround sound system for a more immersive experience.

You can connect your own sound system via the HDMI port.  Hisense

Of course, the projector comes equipped with Android TV, which means you can install all your favorite streaming apps. It also offers WiFi and Bluetooth connectivity, along with Alexa and the Google Assistant to make navigating a breeze. You can even cast directly from your phone or tablet thanks to Chromecast.

While there’s certainly no shortage of short-throw projectors on the market—we’ve even compiled a round-up or two—Hisense’s new all-in-one design appears to produce big pictures and sounds beyond its small size. Oh, and it’ll set you back just $3,299. Not bad for your very own theater.