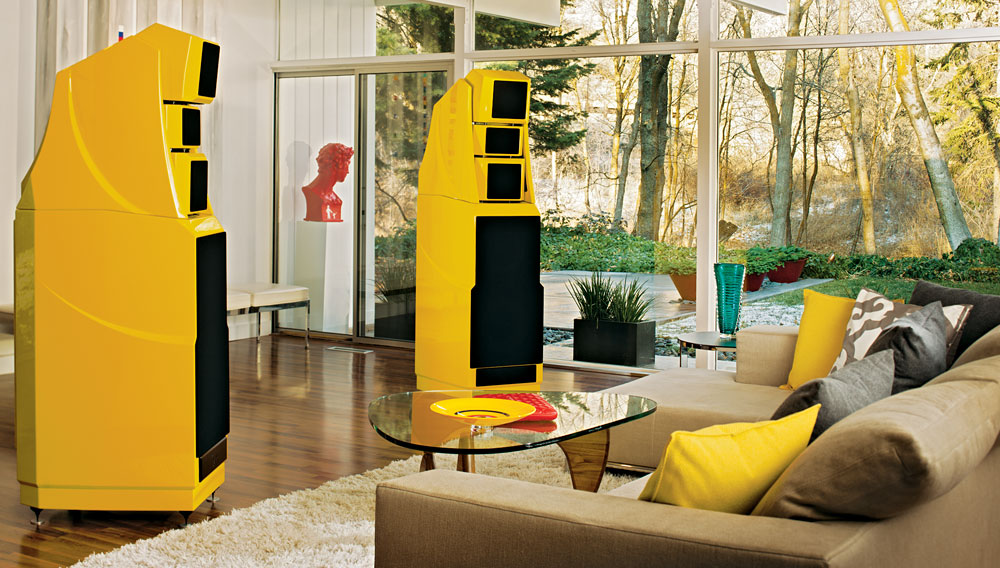 Two pairs of loudspeakers tower beside one another in Dave Wilson’s Provo, Utah, living room. He is preparing for a face-off: On one side are Wilson Audio’s much-lauded Alexandria Series 2 speakers, introduced in 2007, and on the other side is the latest in the series, the Alexandria XLFs. Each of the four stands nearly 6 feet tall and weighs more than 600 pounds. On the surface, they are almost indistinguishable.

“But there are so many differences,” says Daryl Wilson, Dave’s son and product development manager for Wilson Audio. (Dave is the company’s founder and lead engineer.) “Everything we changed has a very significant purpose.”

Indeed, the Alexandria XLF is no simple upgrade to its predecessor. The new speaker, which started shipping in January for $195,000 per pair (compared to $165,000 for the Series 2), represents the pinnacle of the 9-year-old Alex­andria line. The XLF does not replace the Series 2 model, but instead offers the advantages of adjusting to any size listening environment and providing a level of fidelity that few, if any, speakers have previously achieved.

“With the Series 1 and Series 2, we found that the bass suffered in large installations,” Daryl says. Those models use a front-firing bass port, which can limit the speaker’s ability to fill larger spaces. Rear-firing ports direct audio from the bass cabinet backward, reflecting the sound against the wall behind the speakers to better fill larger rooms; however, smaller rooms have natural reflections that need to be minimized in order to keep sound pure. The XLF solves this problem with a patent-pending adjustable bass port called the Cross-Load-Firing port, or XLF, which can fire either forward or backward. The 7.5-pound port module slides in and out of the lower portion of the bass cabinet like a drawer and can be easily affixed for either arrangement.

Other refinements include a 14 percent larger bass cabinet, to facilitate low-frequency response; sturdier internal bracing; and fine-tuned crossover points for more seamless transitions between the 13- and 15-inch subwoofers, two 7-inch midrange drivers, rear-firing ambient tweeter, and new front-firing silk dome tweeter, which has been in development for two years.

As Dave switches playback between the Series 2 speakers and the XLFs, there is a dynamic difference in everything from chorale recordings and symphonic pieces to a James Taylor–Mark Knopfler duet: In each recording, the XLFs reveal vocal and instrumental detail and headroom rarely achieved by loudspeakers, with a high-frequency extension that is especially noteworthy. When it comes to speakers, “different people have different criteria,” Dave says. “For me it’s dynamic contrast and harmonic expression. With the XLF, we’ve significantly improved both.” No matter what size the arena.