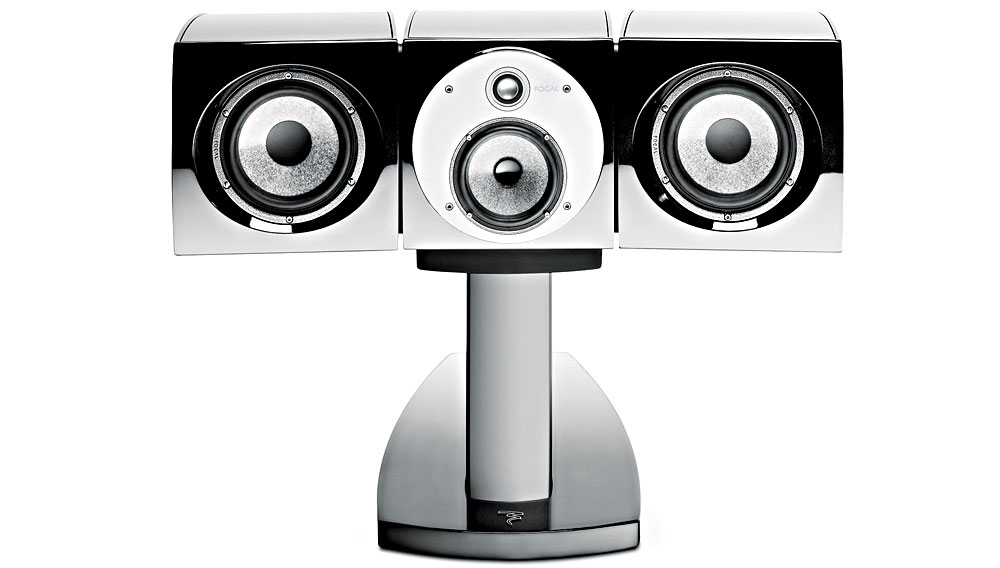 For music reproduction, few loudspeakers compare with the two-channel Utopia models made by French hi-fi manufacturer Focal-JMlab. However, until recently the company had yet to offer a center-channel unit to complement its current generation of reference-quality Utopias—which range from the nearly 7-foot-tall Grande Utopia to the bookshelf-model Diablo Utopia—in a multichannel home-theater system. Focal began developing such a speaker in 2009, but the project did not get off to an auspicious start. “When we received the first prototype from our cabinet factory,” says Gérard Chrétien, Focal’s vice president and director of home and pro audio, “we were a bit disappointed.”

The main obstacle Focal faced in developing a center-channel speaker was a big one: how to incorporate drivers large enough to complement the high output levels of the massive Grande while keeping the cabinet small enough to pair with the relatively diminutive Diablo (and small enough not to dwarf a 50-inch flat-panel TV). This challenge was exacerbated by the fact that the Utopia models’ design calls for dedicated cabinet spaces for each of the driver units. The $180,000 Grande Utopia, for example, uses a separate cabinet segment for each of its five drivers, enabling it to push bone-rattling amounts of air and, thus, sound.

“The only conceivable solution was to use some of the volume of the center cabinet for the woofers,” says Chrétien, whose team addressed the issue by creating internal ports that connect the speaker’s outer cabinets, each of which contains an 8-inch woofer, with the center cabinet that holds the midrange driver and dome tweeter. This design enables the woofers to push a greater amount of air than would be possible from a fully enclosed cabinet of the same size. It also necessitates the conical shape inside the midrange and tweeter cabinet, which, in turn, allows the center module to be rotated.

Focal’s finished product, the Viva Utopia ($12,500), is a highly versatile speaker that has a height or length of about 3 feet—depending on its configuration. Thanks to its rotating module, the unit, which was released in November, can be utilized as a horizontal center-channel speaker or as a vertical-standing right, left, or rear speaker. (Focal optimizes the speaker for any such configuration before delivery.) “In the beginning, we developed [the Viva] as a center channel,” says Chrétien. “But we soon realized how well it works for stereo. This is one of the most advanced solutions Focal has ever developed.”

As versatile as it is, the Viva does not work as a subwoofer—an issue Focal plans to address. The company is developing a Utopia subwoofer to complete the line’s home-theater offerings.