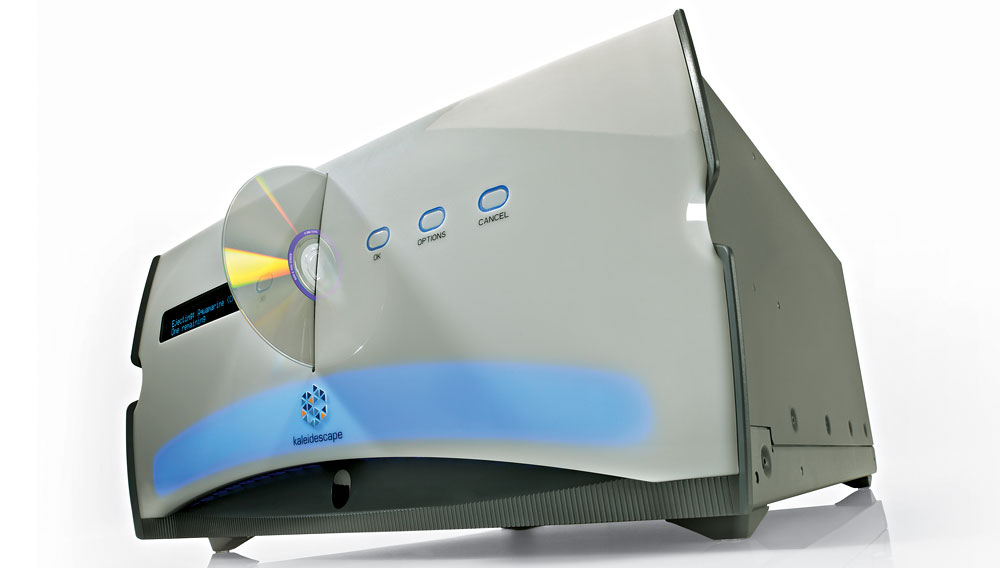 The M700 Disc Vault, which dealers began offering this summer, copies the contents of Blu-ray Discs to a Kaleidescape server, enabling any player in a home’s Kaleidescape network to instantly display the movie you select. You do not have to load the disc and then sift through menu options.

To comply with its licensing agreement, which is structured to allow Kaleidescape to copy Blu-ray content without encouraging content sharing, the company requires that the Blu-ray Discs themselves be present during playback of their copied contents. Therefore the M700, in addition to importing Blu-ray Disc content to the server, also stores the discs themselves. The Disc Vault—which costs about $6,000 and measures 17.5 inches long, 8.8 inches tall, and 21.9 inches deep—holds as many as 320 discs in a rotating carousel that has the capacity of about 14 linear feet of shelf space. (Kaleidescape’s largest media server, the 3U, has the capacity to store information from as many as 600 Blu-ray Discs.)

The M700 (which can also copy the contents of DVDs and CDs to the server) requires about 30 minutes to import a Blu-ray Disc. You can insert discs one at a time as quickly as you can load them into the disc slot, and it will queue them for copying.

The M700 integrates seamlessly with the rest of the Kaleidescape line, including the Blu-ray-friendly M-Class players, which the Sunnyvale, Calif.–based company released last spring.

A recent enhancement to the Kaleidescape system is a feature called Scenes, which bookmarks the most memorable scenes from the movies you import and enables you to bookmark your favorites as well. The company has also introduced CinemaScape, a feature that recognizes when the Kaleidescape player is connected to a movie projector capable of displaying a 2.35:1 aspect ratio and eliminates glitches caused by lens movements and projector mode switches.

In September, Kaleidescape announced its first iPad app, which will be available through Apple’s online app store by the end of the year. With the Kaleidescape app, you can browse and control the media content that is playing throughout your home network. You also can browse your Kaleidescape media library on an iPad while a movie is playing on the system, letting you select and start the next movie before the credits begin rolling on the current one.