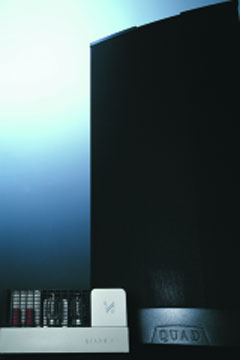 When you think of speakers, you probably picture a box. Whether its casing has a natural wood veneer or is painted a glossy black, or whether the grille protecting the drive units is cloth or foam, the image is still Cubist. And regardless of its appearance, its technology will be almost identical to those of any other box speaker: A musical signal from the amplifier excites a magnet, causing a cone or diaphragm to move air exactly as it was moved when the original sound was recorded.

The operative word is exactly. What you hear during playback is sound that may be tainted by the box itself, by drivers that move too slowly, or by any number of other vexing issues that render speakers the weakest link in the hi-fi chain. Every speaker manufacturer confronts this dilemma—and, of course, some address it better than others—except the few companies, including Quad, Final, and MartinLogan, that make electrostatic loudspeakers, or ESLs.

Because ESLs reproduce sound in a manner completely different from dynamic speakers, they do not face the same challenges, nor do they sound “boxy,” or constrained by edges of the cabinet. ESLs cannot sound boxy because the driver is not enclosed in a box. The driver, or primary moving part of an ESL, is an electrically charged diaphragm resembling a piece of Saran Wrap that is stretched tightly between two vertical panels. (Click image to enlarge)

When the panels receive a charge, or signal, the diaphragm vibrates, creating a push-pull movement that corresponds to the music signal and disperses sound from the front and back of the speaker. Because the diaphragm’s mass is so negligible, ESLs offer precise, airy music with a level of accuracy and detail that conventional speakers cannot match.

MartinLogan is probably the most well-known ESL brand. The company still makes one full-range ESL, but its other models are hybrids that include woofers to reproduce the lower frequencies (which requires moving a large mass of air). The woofer enclosure is discreet, and it is easily mistaken as merely a handsome pedestal. The company’s line of speakers is immediately recognizable with its signature curved black screen. Because the diaphragm is transparent, even the largest models, including the 6-foot-tall Statement, maintain a light, airy, and unimposing silhou-ette. MartinLogan has shown itself to be as forward-thinking as any brand, and developed the first electrostatic center channel, wall mounts, and range of subwoofers.

Final, from Holland, also produces a home theater system, and the sleek, flat speakers are a perfect complement to a silver-edged plasma screen. The 0.2 system is especially multichannel-friendly because Final limited the number of unsightly wires—not just the speaker cables, but the power cords, too. All of the speakers plug into a central box, and the cables that run from the box to the speakers carry both the musical signal and the AC current needed to energize the electrostatics. Unlike other ESL systems, Final’s needs only one AC outlet.

Quad, the elder statesman of the group, makes only full-range ESLs, such as the 988 and 989, the latest models launched in 1999. “From a theoretical point of view, an electrostatic is an ideal way to make a loudspeaker,” says Quad founder Peter Walker, who is known as the godfather of modern ESLs because he created the first and most successful—technically and commercially—full-range ESL. “It matches the air perfectly [because the diaphragm is nearly weightless], and it’s all predictable. Ordinary loudspeakers are rather variable,” adds Walker, referring to the movement of the cones, the cabinet, and the multiple drive units.

Reproducing the complete audible range requires a large diaphragm, which explains why the 988, the smaller of the two, is more than 2 feet wide and 3 feet tall.

Despite Walker’s affinity for ESLs, he is also aware of their disadvantages. The fragile diaphragm must be stretched perfectly, the manufacture is costly, and, at 10,000 volts, the requisite electrical charge can be downright dangerous. “I think most loudspeaker manufacturers have looked at them and said, ‘What a lovely way to make a speaker, but it’s not very practical,’ ” says Walker. “And a lot of manufacturers have tried it, too, and most of them have said, ‘This is not profitable. Get back to making loudspeakers in boxes and sell them, lad!’ ”