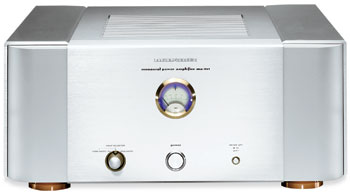 Remembering some of the best audio products of yesteryear can be particularly nostalgic: It is impossible to separate the machine from memories of the music it played. In the next few years, several audio brands will be marking milestone anniversaries, occasions that will celebrate collectible classics and category benchmarks, inspiring the type of reminiscing that inevitably accompanies the playing of a favorite song.

One such anniversary has already arrived. Last year, Marantz celebrated its 50th year in the audio industry by introducing a reference line that marries today’s technology with two of the most popular products from the company’s past. Marantz revisited its Model 7 and Model 9—components that, when built in 1958 and 1961, respectively, helped establish the brand as a high-end touchstone—and reinvented them as the SC-7S1 stereo control preamplifier ($7,500) and the 300-watt MA-9S1 monaural power amp ($7,500). The ST-17 stereo tuner ($750) and the SA-14 v.2 Super Audio CD player ($3,000) complete the line. While the SA-14 outputs SACDs in stereo, the quality is much better than that possible from a CD player.

The electronic progeny are solid-state, cutting-edge designs that exemplify how Marantz is embracing current technology as a means of coaxing the optimal performance from classic, two-channel sources. “The whole design came about with the advances in audio,” says Kevin Zarow, director of marketing and product development at Marantz America. “There was the need for a much higher resolution component. Two-channel and multichannel have improved so much over CD and DVD, but there hasn’t been the equipment to really take advantage of that.” Analog components and stereo sound may please music purists, but it is possible to create a powerful multichannel system using six SC-7S1s and 12 MA-9S1s.

The quality of the parts, the integrity of the construction, and the finish of Marantz products have always been exceptional, and it is no different with these components. The machined aluminum alloy chassis are finished in rich champagne and gold, paying tribute to the appearance of some of the company’s earlier models. The new line also features the company’s hallmark glowing meter, a poignant retro detail that will tug on any audiophile’s heartstrings. The meter on the SC-7S1, which resembles the ignition button on an Aston Martin, provides a digital readout of decibels during playback.

For the MA-9S1, Marantz retained the old-fashioned analog power meter first featured on the Model 9. “We had to—that’s been a Marantz staple,” Zarow, chuckling, says of the illuminated blue circle that has served as a company signature for more than 40 years. “To designate [the MA-9S1] as a 9, we had to put the analog power meter on it. It’s not just for looks, though. It tells you exactly what’s going on inside.”

Indeed, watching the needle flicker in tandem with the rhythm of a beloved tune could convince anyone that some things are best left unchanged.