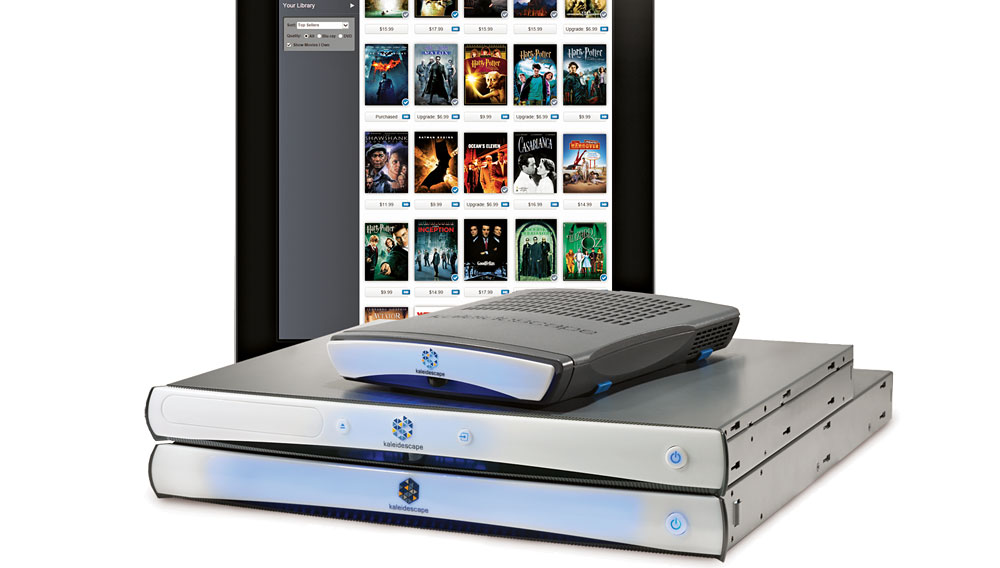 Late last year, after signing a landmark licensing agreement with Warner Bros., the Sunnyvale, Calif.–based Kaleidescape announced that it would sell the film studio’s content through a new online service. Fully launched this May, the Kaleidescape Store offers users the ability to purchase and download the nearly 3,000 movies and more than 8,000 TV shows in the Warner Bros. collection. Such a service is nothing new—Apple and other companies have been selling downloadable video content for years—but Kaleidescape’s version is the first to allow users to download Blu-ray Disc–quality content without having to purchase a physical disc.

Kaleidescape, which is working on similar agreements with other providers, is the leading manufacturer of media-server-based entertainment systems. The company’s largest-capacity server can hold as much as 48 terabytes of content, the equivalent of about 1,300 Blu-ray Discs, which can be played on multiple screens throughout a home. In July the company introduced its first off-the-shelf product, the $3,995 Cinema One, which is a server and disc player in a single box that can store up to 100 Blu-ray-quality movies.

Blu-ray movies available through the Kaleidescape Store can be as large as 60 gigabytes each, whereas movies from Apple’s iTunes and similar services are usually just a few gigabytes. The result is a crisper picture, with more detail, less motion blur, and higher-quality sound. Movies downloaded from the store also benefit from Kaleidescape’s coding, which integrates the video content into the company’s easy-to-use library and on-screen interface. Through the interface, users can implement proprietary features that include the ability to mark favorite scenes and jump to the beginning of a movie (rather than waiting the often painfully long startup time of Blu-ray Discs played in a traditional system).

The considerable size of Blu-ray-quality movies, which cost anywhere from $7 to $26 through the Kaleidescape Store, translates to download times that are often as long as an hour. Kaleidescape alleviates some of this burden by allowing users to queue up multiple movies so that when one download is complete, the next begins automatically. (Through the store, users can also upgrade the DVD-quality content in their libraries to Blu-ray quality.)

Once purchased, the movies can be downloaded to as many as five of the user’s Kaleidescape systems, whether in a primary residence or vacation home, a yacht or private jet. Most downloads come with a cloud-based UltraViolet version of the content so that, through a third-party app such as Flixster, users can also watch videos purchased from the Kaleidescape Store on mobile devices—including Apple iPhones and iPads.