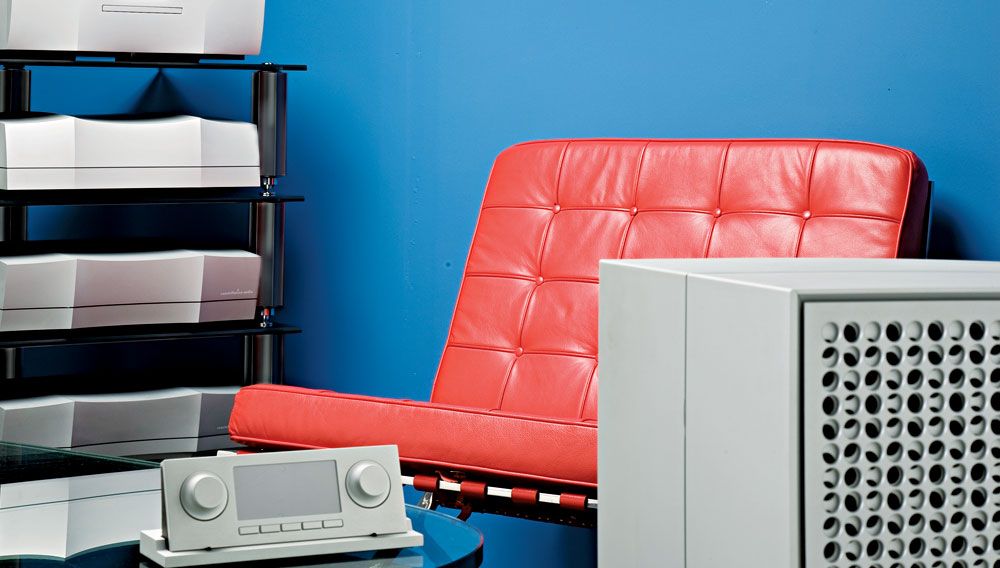 The formation of Constellation Audio in 2008 sent audiophiles’ expectations sky high. The Southern California company’s founders, Australia-based financiers Murali Murugasu and David Payes, launched the venture on the heels of their success with Continuum Audio Labs, producer of a $150,000 reference turntable system that attained legendary status among aficionados. “There was a lot of pressure on Constellation, because the [Continuum] turntable achieved such fame so quickly,” recalls Murugasu, now CEO and president of Constellation. “We knew that whatever we came out with next would be judged against it, so we had to develop something that sonically was on a different level.”

Shortly after announcing Constellation, Murugasu and Payes, the company’s chairman, found an acoustic engineer capable of spearheading such a project. Peter Madnick, a 35-year industry veteran responsible for developing some 400 products, was soon assigned the task of assembling a dream team to develop the brand’s debut sound system. Madnick thus tapped about a dozen of the industry’s best-known designers and engineers, a group that included John Curl, known for his phono-preamplifier circuits, and Bascom King, an amplifier expert who previously worked with such brands as Klipsch and Audio Alchemy.

Following the money-is-no-object approach they took with Continuum, Murugasu and Payes instructed Madnick and his team to build the world’s very best sound system—and then asked what the project would cost. “Like building a house, everything quickly inflated out of proportion,” says Murugasu. “But we just went with the flow.”

The result, as it turns out, was worth the sizable investment: Constellation’s Reference Line, which began shipping in phases in January, represents the new pinnacle of audio reproduction.

The Reference Line’s striking, milled-aluminum components, which are all named for stars or constellations, include a power amplifier, a stereo preamplifier, a phono preamplifier, and a multiformat digital source. The 275-pound Hercules monoblock power amp ($70,000), with its 1,000-watt output and custom-wound transformers, can transmit a percussive impact as large and dynamic as any loudspeakers can handle while still possessing the ability to resolve the most delicate and nuanced musical passages. The fully balanced Altair line stage stereo preamplifier ($60,000), which comes with a gracefully simple touchscreen remote called the Pyxis, is housed in a shielded, vibration-free chassis and offers a 200-kHz bandwidth that reveals every detail of a recording. The Orion phono preamplifier ($70,000)—which Curl equipped with dual-mono circuitry, metal-film resistors, custom-made capacitors, and internal wiring drawn from the purest copper available—enables flawless vinyl reproduction.

The newest addition to the Reference Line is the Sirius high-definition digital music source and multiformat player ($75,000), which became available this summer. Designed to play CDs and SACDs, as well as DVD-Audio and computer files, this triple-chassis source component includes an external triple-transformer power supply and separate digital-to-analog converter capable of delivering double the resolution of SACDs.

A recent audition of Constellation’s four-component system confirmed that the Reference Line fulfills its substantial promise. In addition to breathtakingly realistic bass slam and tonal color with seamless natural decay, the setup reveals all the minute nuances of vocal and instrumental inflections. Such detail comes with a background free from noise and harshness, plus a realistic dynamic range.

With dual Hercules amplifiers, the total cost of Con­stellation’s Reference Line is $345,000—not including speakers—but the company will soon offer a more modestly priced Performance Line. Madnick, however, makes no apologies for creating the best stereo system money can buy. “The bar was set so much higher than anything I worked on before that it was a challenge to meet expectations,” he says. “But with a relatively unlimited budget and the ability to assemble the ideal team to realize everyone’s dreams, I think we’ve established a new standard for audio performance.”