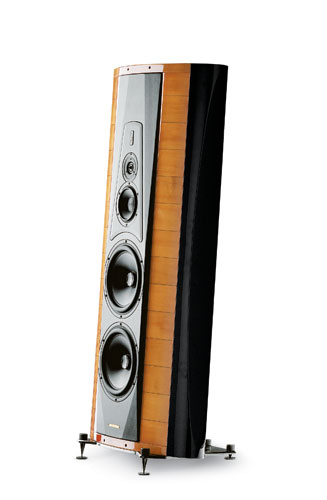 Sonus Faber, the Italian company universally acknowledged for revolutionizing the shape of dynamic loudspeakers, celebrated its 20th anniversary this year with not one, but two significant events. The first was the construction of a 12,000-square-foot factory in Vicenza. The building opened in September, in time to commence manufacture of the other anniversary marker, the Stradivari Homage.

Sonus faber is Latin for “sound factory,” but its new home is anything but a typical industrial structure; its glass core is flanked by two wooden wings that evoke the staves of a lute, the stringed instrument with a pear-shaped body that narrows to a fretted fingerboard. The visual concept is repeated in the listening room, only in this instance, the wood struts break up sound reflections, thus creating a neutral listening environment. Here is where the company has perfected its new flagship speaker.

The Stradivari completes the trilogy of Homage models named after esteemed violin makers living in Cremona, a historic city southeast of Milan. Sonus faber launched the series a decade ago with the Guarneri Homage ($10,000 per pair), a compact, two-way speaker set atop an integrated stand. The speaker, which is still in production, shares more than just a name with the 17th-century violin maker. The solid, fine wood staves are assembled and finished using the same techniques and organic glues and lacquers that its namesake employed four centuries ago. The Guarneri was the first speaker to break out of the box: It introduced the radical lute-shape cabinet that countless manufacturers have since copied.

The Guarneri was followed in 1998 by the Amati Homage ($22,000 per pair), a full-range, floor-standing system. Like the Guarneri’s, its grill is reminiscent of a series of strings, a design that evokes Cremona’s most famous instrument. Both speakers feature hand-finished, high-gloss coatings, black lacquer accents, and fine leather coverings for the front surfaces, or baffles.

The Stradivari Homage ($40,000 per pair), the final model, solidifies Sonus faber’s reputation as a pioneer in design. At first glance, the speaker appears to be two Amatis positioned face-to-face, but closer inspection reveals a completely new speaker profile that is certain to be mimicked. The speaker stands 531¼2 inches tall and 26 inches wide, but it is only a foot deep. “The Stradivari is the ultimate statement of what Sonus faber means,” says company founder and designer Franco Serblin.

Although Serblin’s design deviates from the lute shape, he incorporated visual elements—the string grills, wooden construction, leather around the drive units, and the black lacquer top and bottom—that distinguish the Stradivari as a sibling of the earlier Homage speakers. “I have stayed faithful to the original concept—this is my homage to the greats of Cremona,” he says. He also integrated Sonus faber’s new highly refined drive units and used silver conductors and alloy wiring and connectors. “It would not have been right to inject high tech into the Stradivari—to try to reinvent the speaker,” Serblin explains. “It is an evolution.”