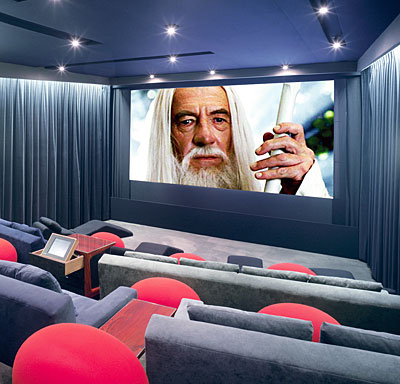 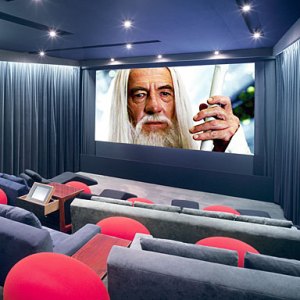 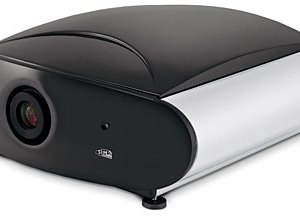 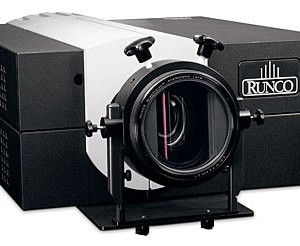 Rare is the home theater that can offer a viewing experience with the same impact as watching a great movie on a large, commercial cinema screen. You can re-create the environment of your local movie house and add high-quality, enveloping surround sound, but without an image that fills your entire field of vision, you may still feel as though you are watching just a large-screen TV. With the help of some new digital projector technology, however, a handful of enthusiasts and dealers have brought that larger-than-life image—and the ultimate cinema experience—home.

New solid-state technology—never to be confused with obsolete tube technology that is responsible for the dim and fuzzy images associated with sports bars—has made it possible to create screen sizes of previously unimaginable proportions. According to Joaquin Rivera, North American sales manager for cinema and home theater screen manufacturer Stewart Filmscreen, the average screen size the company used to sell ranged from 100 inches to 110 inches (measured diagonally), or from 8 to 9 feet wide. That is the minimum screen size that most dealers now install. Home theater installer R-Squared of Santa Monica, Calif., for example, typically includes screens that are from 10 to 12 feet wide. “Seven-to-eight-foot-wide screens were the norm back in the days of three-tube projectors,” says Bill Anderson, president of Genesis Audio & Video, a home theater installer in Irvine, Calif. “A 10-foot-wide screen was unheard-of unless you went to the trouble and expense of using multiple projectors converged on the same screen. Now, we install 10-foot-wide screens with a single projector on a regular basis.” Anderson adds that his company, like R-Squared, has installed screens as large as 13 feet wide.

One of Genesis’ larger screen installations was for the Southern California home of best-selling novelist Dean Koontz and his wife, Gerda. Anderson had been working with the Koontzes on the project for nearly 10 years and through two completely different designs. As the design process progressed, it became clear that the clients wanted a spectacular showcase for watching movies. Dean Koontz was particular about the details of the theater and made substantial design contributions throughout the process. Approximately 2,000 square feet of the home’s lower floor had been reserved for a box office, theater, and bar. When Anderson realized the scope of the project, he enlisted theater designer Theo Kalomirakis to add the theatrical elegance for which he is renowned.

The Koontzes wanted to be able to host charitable events in the theater room, and wheelchair access was a must. In response to this request, Kalomirakis, with significant input from the client, designed a space that can seat 20 people in the main viewing area and as many as 18 people in the nine wheelchair-accessible balconies. With such a spacious theater, a large screen was a necessity; otherwise the room would dwarf the screen.

When the design phase of this project began roughly 10 years ago, single-lens digital projectors were but gestating in the research and development labs of the major video projection manufacturers. The front projectors of the day were three-gun beasts using cathode-ray tube–based technology that strained to create a large image. While CRT projectors can provide a great-looking image on a screen that is smaller than 7 feet wide, these projectors are not adept at creating larger images. CRT-based projectors also have a short throw-distance; for the projector’s image to fill the screen, the projector has to hang from the middle of the ceiling or peek its head up from a spot in the floor that would otherwise be a prime seating position.

Anderson had kept abreast of forthcoming technologies, however, and knew that bigger, brighter images would be possible by the time the home theater neared completion. He even added Sam Runco, owner of Runco International, as a consultant on the project. Runco, a leader in digital projection technologies, delivered the VX 3 projector to Genesis for the Koontz theater. The projector, an offshoot of commercial cinema-grade digital projectors, has more than enough power to light up the theater’s 13-foot-wide screen.

In addition to their increased light output, digital projectors bring another bonus: long-throw lenses that enable the projector to sit as far from the screen as necessary to fit the room. The days of having the projector hang from the middle of the ceiling where the chandelier should be are gone. For the Koontz theater, Anderson designed a true projection room that sits 44 feet back from the screen. A glass projection window separates the projector from the theater, just as it would in a commercial cinema.

Typical home screening rooms often utilize screens that are larger than 13 feet. The difference between a screening room and a home theater may be semantic, but members of the entertainment industry with screens as large as 16 feet wide use them to watch film presentations at home as often or more frequently than they use them for viewing DVDs or TV.Brad Wells, owner of Bradford Wells and Associates, a home theater installer in Los Angeles, originally set out to design a home screening room for film producer Jon Avnet. Avnet wanted a large screen that also could accommodate an image with a wide aspect ratio, one shaped like the widest commercial cinema screens, as opposed to a television screen or even a traditional home theater screen. Wells, like Anderson, realized that he could utilize digital projection technology rather than a film projector to address Avnet’s request. He installed a DP brand projector that uses a motorized zoom lens to fill a 15-foot-wide 2.35:1 aspect-ratio screen (most televisions have an aspect ratio of 1.33:1, and most home theater screens, a wider 1.78:1) or to accommodate high-definition and standard television.

Los Angeles–based home theater installer Sound Solutions recently updated a theater with a 13-foot-wide screen that used a film projector in the back of the room for movies and a CRT projector hanging from a lift in the middle of the ceiling for video and TV. The CRT projector could not fill the screen, so Sound Solutions installed an NEC digital projector that fills the entire screen with a bright image that is comparable to film.

To demonstrate the impact of such a system to its clients, Sound Solutions recently installed a 14-foot-wide screen in its showroom. (Demonstrations are available by appointment only.) “We have so many clients who want a movie theater–like experience, this was the best way to show them what was possible,” says Sound Solutions’ General Manager Michael DiSanto. “We want to be able to show them the whole experience and then, at the touch of a button, zoom the image size down so they can see something smaller, as a comparison or if that’s more appropriate.”

A number of elements distinguish this showroom theater from others. Besides the size of the room and the enormous screen, the theater can utilize one of two digital projectors from Marantz or a commercial-grade projector from Panasonic. The company uses a single-chip Marantz DLP (Digital Light Processing) projector for smaller theaters and the higher-end, three-chip DLP projector for larger installations. The Director’s Choice screen (starting at $25,000) from Stewart Filmscreen features a digitally controlled, motorized masking system that frames the image with black drape on all four sides to create any size picture the user desires.

One of the advantages of having such a large screen in its showroom is that Sound Solutions can show clients what screen size is appropriate, based on how large the client’s room will be and how far the client will sit from the screen. Big screens are not always the panacea that they seem to be. The problem is, if you sit too close to a large screen image, you will see all the imperfections in the picture. Even with crystal-clear high-definition signals, without adequate distance between you and the screen, the various elements that compose the image can become painfully obvious. The image no longer has a smooth, lifelike appearance; you are constantly reminded that you are watching an electronically created picture. It is therefore advisable to determine the appropriate screen size before starting the theater installation.

A number of mathematical formulas can help determine the proper screen size relative to your seating distance. The difference from one formula to the next is based on the image quality of the source material. You won’t mind sitting closer to a screen when you are projecting high-definition images. You will want to sit farther back when you are watching VHS videotapes.

A general rule of thumb suggests that the screen width should be equal to half the distance between your seat and the screen (a 10-foot-wide screen for a distance of 20 feet, for example). But this assumes your only interest is image clarity. If you are concerned with the overall impact of the viewing experience, you will not find any applicable formula, but you will know the right screen size when you see it.