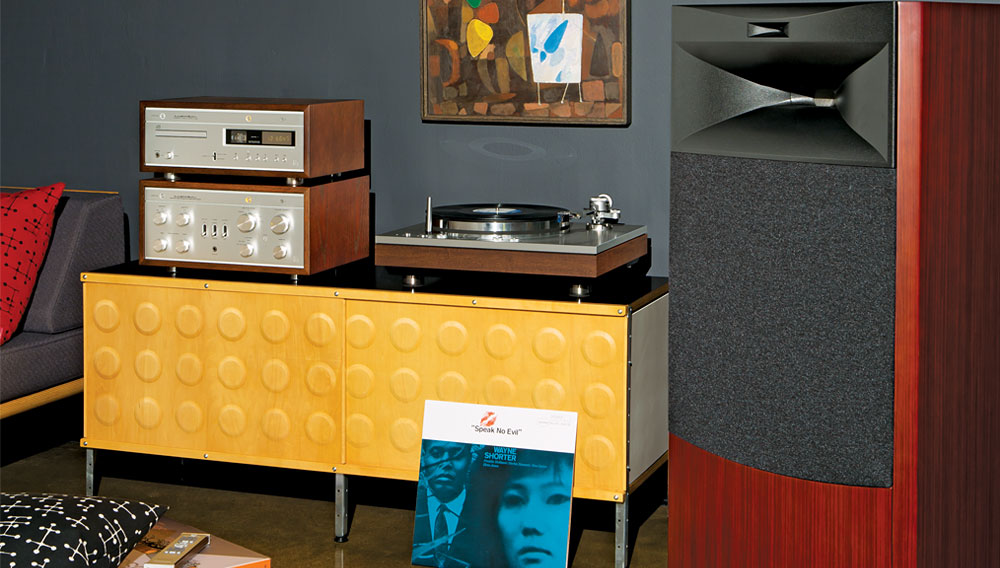 Audiophiles can also be slaves to fashion, and one seeking a music system to complement a postwar modern interior will find that most contemporary components are jarringly out of sync with the classic furnishings of Eames, Nelson, Noguchi, and other midcentury designers. So what’s a hepcat hi-fi enthusiast to do?

JBL and Luxman may provide solutions. The two audio-component companies share the common goals of achieving excellence in sound and creating timeless design. Combined, they claim more than 150 years of experience advancing the audio arts. JBL, an American company, is renowned in the United States and Japan, while Japan’s Luxman is almost unknown in this country. The two brands may seem unlikely bedfellows, but the musical—and visual—synergy realized by pairing their components can be brilliant.

Luxman—which was founded in 1925 in Osaka as a radio-equipment importer and is now a subsidiary of the International Audio Group—designs, assembles, and tests its products in Japan. On a Higher Note, a company in San Juan Capistrano, Calif., serves as the Luxman distributor for North America.

Most current Luxman gear is solid state, but the company tips its hat to the vacuum tube by continuing to offer its longest-lived product, the SQ-38u integrated amplifier ($6,000). Though it has evolved through 11 iterations since its debut in 1964, the amp retains the classic look of the original with an exquisitely machined aluminum faceplate, velvet-smooth controls, and a wood cabinet. The SQ-38u’s sound is anything but retro. The 44-pound component employs a quartet of EL-34 output tubes and massive, custom-wound transformers to deliver 30 watts per channel into 6 ohms. This is potent vacuum-tube power and, as the amp demonstrated during a test session at the Harman Luxury Audio Group headquarters in Northridge, Calif., is sufficient to drive a pair of JBL’s top-of-the-line speakers to earsplitting levels.

Luxman makes exceptional digital playback equipment, including the D-38u CD player ($4,000). It complements the look and sound of the SQ-38u amp and features a unique front-panel switch that allows the listener to select vacuum-tube or solid-state output. Vocals and acoustic instruments sound warmer and more open with the tube circuit, but some listeners may prefer the speed and bandwidth of transistors for amplified music with wide dynamic range. A window on the front panel exposes the glowing valve—a warm reminder of the time when vacuum tubes ruled the audio world. A wood-trimmed remote control enables Eames-lounge-chair potatoes to take command of the D-38u without budging.

Responding to the resurgence of vinyl, Luxman has returned to the turntable market after a hiatus of nearly three decades with an impressive deck called the PD-171 ($6,400 with the tonearm). The belt-drive turntable weighs more than 50 pounds and has a wood trim that matches that of Luxman’s tube electronics. The massive aluminum platter is speed-regulated by a precision-controlled synchronous a.c. motor and a novel strobe that can be adjusted by silky plinth-mounted knobs. The static-balance tonearm is suitable for even the sumptuous Ortofon SPU and other high-mass phono cartridges, as long as they are accompanied by a heavier counterweight. The SQ-38u amp is equipped with a superb phono stage that accommodates moving-magnet and high- and low-output moving-coil cartridges. The Brinkmann Pi ($2,700, distributed by On a Higher Note), a low-output moving-coil cartridge, was the choice for our listening test involving the Luxman components and JBL speakers.

JBL was established in 1946 in Los Angeles by James B. Lansing, who had been designing and producing loudspeakers since the 1920s. Now owned by Harman, JBL has been bringing sound to professional studios, concert halls, and living rooms since its founding. JBL’s high-end components, including its flagship $75,000, 630-pounds-a-pair Everest DD67000 loudspeakers, are sold under the JBL Synthesis brand.

Like the Everest, the S4700 speaker ($20,000 a pair and 120 pounds apiece), which the company introduced last year, employs JBL’s most sophisticated technology. With 94 dB efficiency and 6-ohm impedance, the S4700 is the perfect mate for the Luxman rig. It achieves realistic volume on massed orchestral passages, high-powered jazz, and amplified rock music.

For the listening test, two S4700 speakers were placed about 8 feet apart in a moderately damped, 500-square-foot room. The playlist included CDs, LPs, and analog tape with an emphasis on unamplified classical, jazz, and vocals. (The analog tape—from the Tape Project, which produces and sells copies of studio master tapes—was played on a $13,000 Sonorus Audio ATR10 recorder.)

Blue Note Records classics such as Wayne Shorter’s Speak No Evil, remastered on a 45 rpm LP, rendered Shorter’s tenor sax with body, timbre, and explosive dynamics that placed the horn right in the room. Bach’s Art of the Fugue, performed on organ by Charles Krigbaum and pressed on a rare 45 rpm Mark Levinson LP from 1976, plumbed the depths; one could feel the pipes moving the air in a large, reverberant hall. A CD by the O-Zone Percussion Group reproduced cymbals, snare drums, and gut-wrenching kick drums with frightening attack and no overhang. Voices—the true measure of a speaker’s mettle—were captured with dynamic realism, corporeal substance, and plenty of air. From bawdy Renaissance songs to Mose Allison’s “If You Live” on master tape, the JBLs placed the singer precisely, on stage or in the jazz club. And with low-level, near-field listening, the speakers rendered detail with electrostatic-like precision. The S4700 is suited to smaller rooms as well as the expansive, open-plan rooms favored by post-and-beam and Case Study aficionados.

Key to the speaker’s sound is JBL’s proprietary driver technology. Two compression drivers firing through a single-piece SonoGlass dual-horn assembly reproduce mid and high frequencies. A 2-inch driver with a titanium diaphragm handles midrange frequencies from 800 Hz on up. Atop the 2-inch driver is a 0.75-inch driver that crosses over at 12,000 Hz and goes to an inaudible 40,000 Hz. Positioned on the front baffle, below both drivers, is a cast-frame 15-inch woofer with a dual 3-inch voice coil and a neodymium motor structure porting through a single rear opening. Dual binding posts allow biwiring or biamping. The S4700 speaker’s furniture-grade cabinet is veneered in cherry on all sides, so that it will not display an unfinished backside regardless of where it is placed in a room. The speaker’s color is an uncanny match to the Luxman veneers.

While showcasing the JBL speakers, our listening session also demonstrated that the Luxman electronics deliver far more than their modest power—and price—suggests. Like the legendary Marantz and McIntosh gear of the 1960s, these are heirloom components. Likewise, JBL speakers are worthy of being passed down to the children’s children. With their style, substance, and impeccable sound, the Luxman and JBL components form a system for the ages.