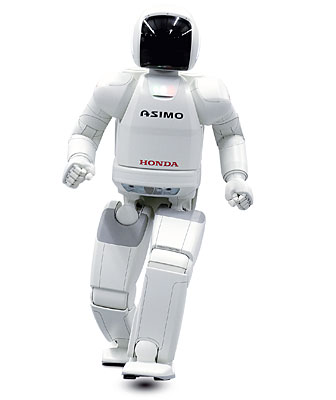 As the lights dim at Disneyland’s Honda ASIMO Theater in Anaheim, Calif., a blue curtain rises to reveal what appears to be the set of a sitcom. A living room connects to a home office, stairs lead to a second-story hallway, and a doorway opens to an imaginary world outside, from where ASIMO, the show’s futuristic protagonist, makes its entrance.

Four feet tall and sporting a gray backpack on its white plastic body, ASIMO evokes a second-grader in a Star Warscostume—except that the robot seems eager to do as it is told. With fists clenched, slender legs cocked slightly as if ready to pounce, and a faint smile carved below two large, round eyes on its black plastic face, Honda’s humanoid stands ready to receive and follow orders.

ASIMO, or Advanced Step in Innovative Mobility, is the product of a research program Honda launched in 1986. The company says the program’s goal is to build robots that one day will provide “vicarious mobility” for elderly and disabled people who cannot perform basic tasks themselves. The project’s early experimental models, which consisted of simulated hips, legs, and feet, required nearly five seconds to take a single step forward, but Honda eventually refined bipedal motion and other anthropic movements. In 1993, the company added a head, torso, and upper limbs to create the P1, a 6-foot-2-inch, 386-pound behemoth that could grab a doorknob and turn an electrical switch off and on. The P3, which debuted in 1997, was smaller and capable of ascending and descending stairs, but Honda’s major breakthrough came in 2000 with the introduction of ASIMO.

ASIMO’s diminutive size places its head near the eye level of people who are confined to a bed or wheelchair, while still enabling the humanoid to perform such tasks as turning off a light or clearing a kitchen counter. The robot’s dimensions, as well as the smile on its face, also contribute to a benign appearance that Honda believes will be agreeable to consumers, who may be unsettled by the thought of a 386-pound piece of machinery lumbering through their homes.

Other advances in ASIMO include its ease of use (it is controlled with a portable computer) and freedom of motion. During the 15-minute demonstration at Disneyland, ASIMO rotates and bends its arms from the shoulder, elbow, and wrist; walks forward, backward, and to the side; struts up and down stairs; dances the hula; and even kicks a soccer ball into a makeshift goal. On command, the humanoid accesses a weather report online and verbalizes the forecast.

ASIMO’s backpack contains a computer that allows this functionality, and its eyes are cameras that enable the robot to view its surroundings. ASIMO remains incapable of tasks that will be necessary before it is ready for home use, but Honda already has built a more advanced model that can run faster (3.7 mph compared to 2 mph), operate longer on a battery charge (one hour versus a half hour), and even walk over to a wall, plug in, and charge itself when it is about to lose power.

Honda will not reveal when it plans to market humanoid robots, but the company’s most challenging task—equipping ASIMO with bipedal motion—is behind it. Honda engineers now are focused on improving the robot’s ability to think on a conditional basis and react to its environment. Such a humanoid eventually could perform tasks with complete autonomy and, in addition to helping the needy, serve as an assistant in homes and offices. According to Honda, it is a future that is closer than most people might think.