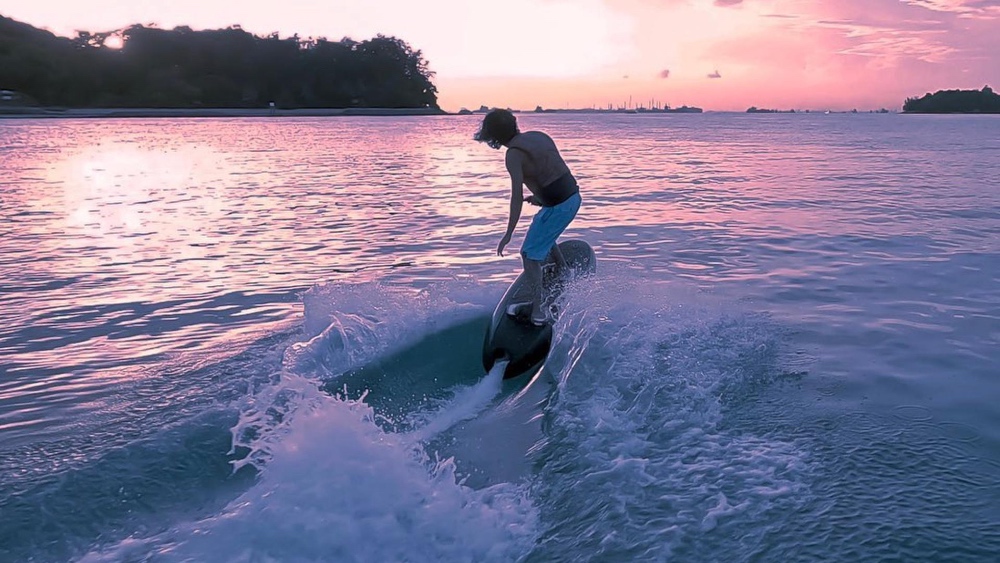 One Singaporean startup wants to make surfing even more electrifying.

The Kinetic Option has unveiled a futuristic electric surfboard that can cut through fresh or salt water at impressive speeds for just shy of an hour before running out of juice. The newcomer, known as the TKO 001, sports a removable plug-and-play lithium battery that can generate up to 12 kW of power. This enables the board to reach speeds of up to 34 mph and cruise for up to 45 minutes per charge, according to the company.

Spanning nearly six feet from tip to tail, the TKO 001 is crafted from lightweight carbon fiber and tips the scales at roughly 40 pounds without the battery installed. Riders can control how fast or slow they want to move through the water via a handheld remote. This waterproof device also features a screen that displays stats like the current speed and the battery charge level.

Unlike most other battery-powered surfboards currently on the market, the TKO 001 is equipped with nifty foot bindings like a snowboard instead of a traditional open deck. This setup reportedly gives you a little more stability. If you do manage to slip off, though, the accompanying leash detects your fall and cuts power to the board’s motor so it can’t get far.

The Kinetic Option isn’t the only company bringing the humble surfboard into the 21st century with innovative tech, of course. Lift Foils recently unveiled a surfboard with the ability to carry two riders instead of one, while Awake‘s award-winning Rävik S lets you surf even when there are no waves.

As for the price, the TKO 001 will set you back a little over $12,000. The board can be preordered now with a 10 percent discount and is expected to be delivered in late 2022. You can also shell out for a deposit to secure a 2023 build spot.