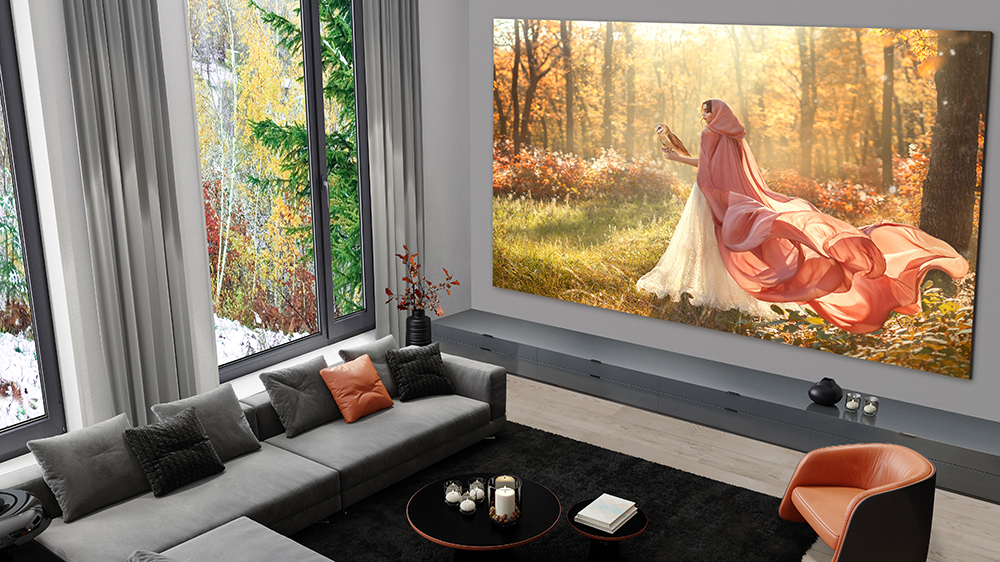 Skip that trip into space and spend your ticket money on experiencing otherworldly video and audio journeys that will never require you to leave the couch. Approaching from opposite ends of the playback spectrum, these new digital and analog releases, representing stratospheric levels of both cost and technological achievement, are on a mission to present the most precise simulacrum of a theatrical experience or live musical event from the comfort of home.

LG’s new 325-inch DVLED Home Cinema Display represents a giant leap in television advancement with a brilliant, ultrahigh-definition model unmatched in its combination of size and picture quality. While most modern TVs use light-emitting diodes on or behind a liquid-crystal display (LEDs in an LCD, for short), here a direct-view LED screen employs more than 99.5 million individual diodes—one red, green and blue per pixel—to render an image on a screen that runs 27 feet diagonally. The impressive proportions are matched by 8K resolution that’s touted to deliver incredibly accurate contrast and colors, all without burn-in artifacts that can plague typical flat screens. And unlike projector-based systems that perform only in darkened rooms, the DVLED reproduces an intense picture even in a brightly lit interior. Previously available to commercial clients exclusively, LG’s 2,222-pound display is now offered to the home market for an equally hefty $1.7 million.

Pennsylvania-based Oswalds Mill Audio (OMA), known for its artisanal music systems employing horn loudspeakers and vacuum-tube electronics, has introduced a state-of-the-art assault on old-school vinyl playback. In development for seven years, OMA’s over 200-pound, $363,000 K3 turntable is an analog rig that suggests a construction crane atop a Bauhaus edifice. The cast- and machined-iron base ensures the type of micro-detail and articulation that the finest phono cartridges are capable of when uncompromised.

The direct-drive motor is more powerful than any ever employed on a turntable and is accurate to arc seconds, with stability further enhanced by the high-mass platter. The tonearm, designed by Frank Schröder of Berlin, is the first to use selective laser melting, an additive 3-D printing technology that allows for the manufacture of designs previously impossible to fabricate. Cartridges can be fine-tuned for optimal tracking force and alignment, while its low-mass counterweight reduces resonance. And the outboard, Xenon tube-rectified power supply can be concealed within a dedicated turntable stand designed expressly for the K3 system.