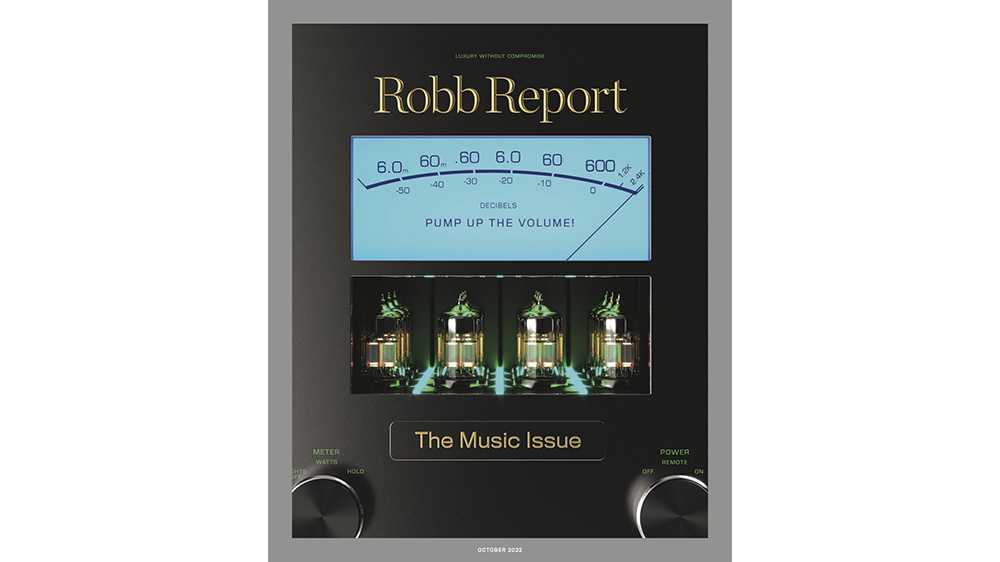 Many of you who read Robb Report in print as well as online were attracted to the illustration on the cover of October’s music issue. The bright blue meter and those impactful tubes gave rise to a fair few questions: What is it? What do they do? How do they work?

Those familiar with the world of professional-level audio will have encountered components whose front panels feature meters, typically used to display an amplifier’s instantaneous power output into a loudspeaker. These little windows into an amplifier’s innards are especially useful in professional applications when engineers and performers want to know what’s going on “behind the faceplate,” and for listeners who want to know how hard an amp is working in their home audio system.

Our illustration was inspired by a number of different brands and systems. One in particular, McIntosh Laboratory, is known for its blue-lit meters, popularized by the Grateful Dead’s famous “Wall of Sound,” an earth-shaking, five-story tall sound reinforcement system powered by 48 McIntosh MC2300 amps that was built for the band’s 1974 performance at the Cow Palace in San Francisco.

Founded by Frank McIntosh in 1949, McIntosh Laboratory has been building its products in Binghamton, New York since moving there in 1956. Their Unity Coupled Circuit, patented at the brand’s inception, is still used today in products like their MC275 amplifier, whose vacuum tubes—used in many of the company’s products—help to impart a lifelike warmth and soul to the sound. McIntosh transformers are hand-wound in house as they’ve always been, and, according to a recent conversation I had with Charlie Randall (who joined McIntosh as a co-op student in 1988 and is now the company’s president), about one-in-four of the people who work there have been on the job for more than 20 years. Such dedication, reflected in the design, build-quality and sound of the gear itself, is tangibly demonstrated by the demand for McIntosh product in the marketplace. Like some Swiss watches and European sports cars, it might take a while to get a piece of gear. And if you ever need a pawnbroker, few audio components hold their value like McIntosh. Think Rolex, in black and blue. Here’s how we’d set up our dream McIntosh rig.

A “Mac Stack” is something to which any blue-blooded audiophile might aspire, and chances are, it will have lots of meters. This system is configured for music lovers who want their own “Wall of Sound” at home.

Believe it or not, the gargantuan MC1.25KW is not Mac’s biggest amplifier. That would be the three-chassis MC2KW, a 2,000-Watt monoblock made for, well, who knows what? But for only slightly less power-hungry listeners, this 1,200-Watt brute should fill the bill. You’ll need two for a stereo system, and more if you choose to bi-amp your speakers. $13,500

This preamp features separate audio and control sections, each relegated to its own chassis. It includes 12 analog inputs and two configurable phono inputs, and offers both solid state and vacuum tube output, so that listeners can tailor their sound to taste. With fully balanced circuitry, it’s as full featured as a preamp gets. $16,000

The most ambitious McIntosh SACD/CD player features two 32-bit/8-channel professional-grade DACs and a reference-grade CD player. Seven digital inputs support a variety of external digital sources, while balanced and unbalanced analog outputs can be tailored with both solid-state and vacuum-tube configurations. $12,000

The top turntable in the McIntosh lineup is a substantial belt-drive design that comes equipped from the factory with a tonearm fitted with a low-output moving-coil cartridge. It’s impossible to ignore the massive, illuminated silicon acrylic platter, and of course the blue meter, which reads out 33, 45 and 78 platter speeds. $12,000

These towering behemoths express McIntosh’s ultimate statement in loudspeakers. With a 2,000-Watt power rating, they can raise the roof, but delicacy and detail are also their strong suits. A ported, 4-way design, each speaker features a line array with 81 high- and upper-mid frequency drivers, and weighs a staggering 354 pounds. They can be tri-amped and tri-wired, so extremists can throw six MC1.25KW amps at them if so inclined. $140,000/pr