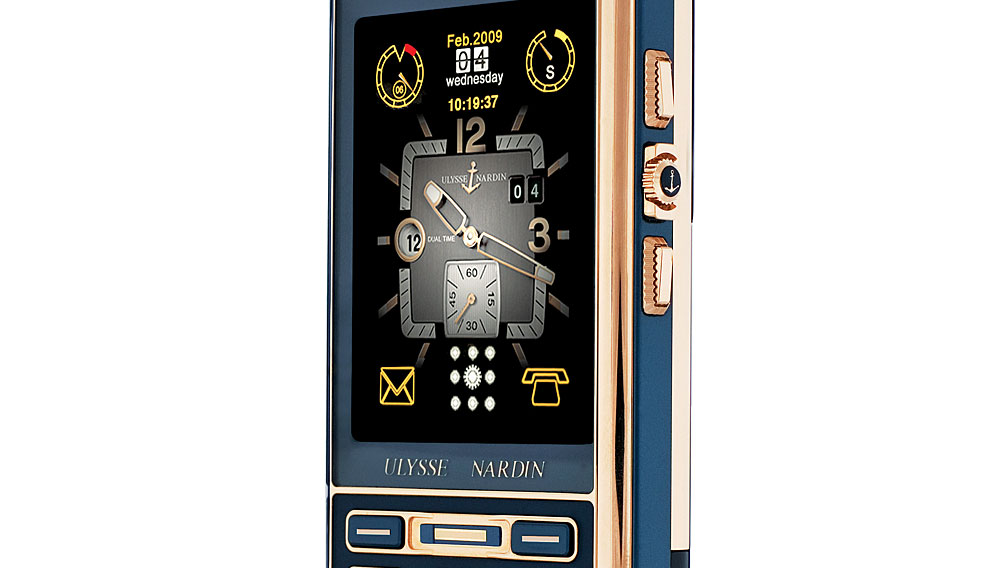 The first cellular phone call was made in 1973 on a handset that weighed 2.5 pounds and stood 9 inches tall. Soon thereafter, cell phones became symbols of wealth and status; early users paid top dollar to make phone calls on the go. Today, however, that distinction is lost. According to CTIA-The Wireless Association, there are more than 270 million U.S. subscriptions to cell-phone services.

“The wealthy consumer needs that status symbol back,” argues Bobby Yampolsky, a cofounder of Palm Beach, Fla.–based SCI Innovations. The company recently launched UN Cells, a luxe mobile-phone brand to which the 163-year-old Swiss watchmaker Ulysse Nardin has lent its name and pedigree. UN Cells is offering various iterations of a hybrid smart phone called the Chairman that range in price from $12,800 to $49,500. Each variety has a limited production of 1,846 units.

These are the world’s first smart phones to incorporate mechanical watch elements into their design and functionality. With the Chairman line, Yampolsky hopes to return the cell phone to a position of distinction. “Women have clothing, jewelry, purses, accessories, et cetera,” he says. “Other than cars and watches, men don’t really have any status symbols. We felt there was something missing.”

In developing the Chairman concept, Yampolsky turned to Ulysse Nardin, a company that enjoys the kind of strong brand recognition in the luxury market that he wanted for his new phone line. “We have been approached many times to obtain a license to our name,” says Rolf Schnyder, CEO of Ulysse Nardin. “I had always declined in the past, but I just knew this project was going to set an industry standard.” Schnyder’s intuition proved accurate: At the annual BaselWorld watch-and-jewelry trade show in March, UN Cells unveiled a prototype of the Chairman; by week’s end, Yampolsky says, he had sold his entire first year of production. “We have already received more than 1,846 orders for some models,” says Yampolsky, “and we haven’t delivered one phone yet.”

Much of the buzz surrounding the Chairman comes from the fact that it is the first smart phone to employ a watch rotor and crown, both designed by Ulysse Nardin exclusively for UN Cells. Should a user exceed the battery’s eight-hour talk time, enough supplemental power to make a phone call can be generated by winding the crown or shaking the rotor. Other functions include a 3.2-inch touchscreen for Web surfing and high-definition video playback, 32 gigabytes of internal memory, a camera capable of taking 8-megapixel photos, and, impressively, a digital fingerprint reader for owner identification.

Such accoutrements demonstrate how far mobile technology has come since the behemoths of the 1970s. To Yampolsky, the creation of the Chairman is just a natural step in the cell phone’s evolution. “Watches have been a status symbol for over 300 years,” he says, “but the cell-phone industry is only about 30 years old. So when [Ulysse Nardin] gave us the opportunity to create a phone with their name and pedigree, we knew it was meant to be.”