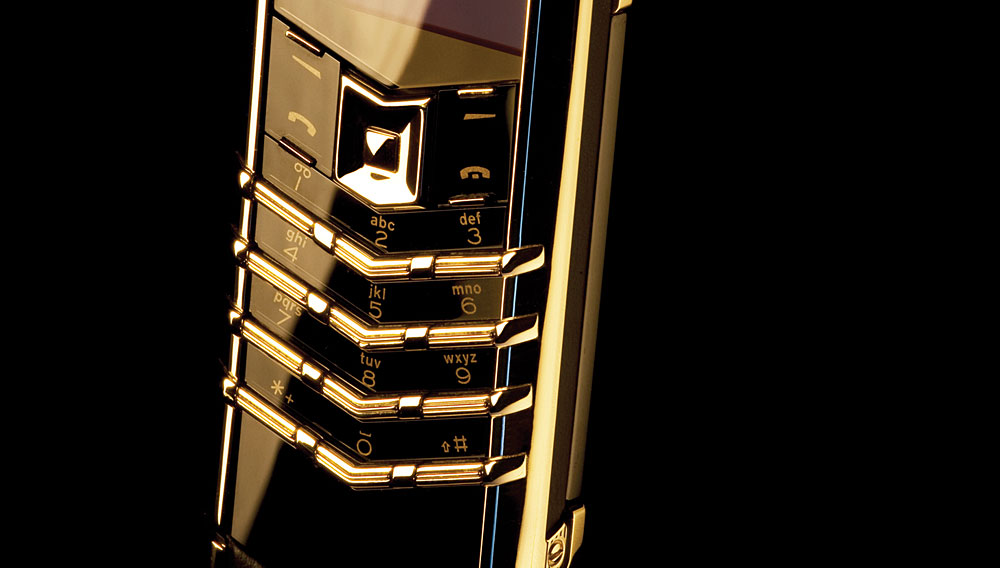 “The lifeblood of a designer is to keep things moving,” says Frank Nuovo, creative director and designer for Vertu, the high-end mobile-phone brand he launched in 1998 when he was head of design at Nokia. For the last decade, Nuovo has kept Vertu and its product line moving forward, both creatively and relentlessly. His latest effort is the revamped Signature cell phone ($12,600 to $39,000), which combines stainless steel, white or yellow gold, and sapphire crystal in one technologically advanced device.

“I wanted our flagship phone to be confident—an upright creation that represents success,” Nuovo says. “Like a beautiful high-rise or bridge, the structural elements and interlocking details exhibit strength in line and form. It’s classic and timeless.”

Much like a master watchmaker might put together a limited-edition mechanical timepiece, a craftsman working in Vertu’s headquarters near London assembles each Signature handset from start to finish and signs it upon completion. The man-made sapphire crystal (reminiscent of a watch crystal) that protects the cell phone’s display is highly scratch-resistant—so hard, in fact, that diamond-tipped tools must be used to cut, grind, and polish it. “We chose sapphire for what it does, its performance,” Nuovo says. “I have used my phone every day for two years, and [the sapphire] is still flawless.”

Vertu borrows other elements from the watch world as well, such as the 4.75 carats of ruby bearings that have been incorporated into the Signature’s keypad. This precise construction produces a solid, tactile click with each push of a button. “You can’t just slap together sapphire and metal,” Nuovo says of the lengthy production process required to manufacture each Signature. “You have to assemble everything in a certain sequence, tighten it, test it—there are no shortcuts. It takes days to produce a Vertu, compared to seconds to make a mass-market phone.”

Nuovo speaks proudly of the variety of ringtones—some of them amusingly unusual—that Vertu offers in its latest phones. “We work hard to make sure the audio experience is as wonderful as the visual and tactile experience,” says the 48-year-old, who worked his way through college as a drummer. “The resonance is not just about the speaker, but the way the interior structure has been engineered.” Dario Marianelli, an Academy Award–winning composer, composed music for the Signature’s ringtones, which were performed by the London Symphony Orchestra.

Beyond these bells and whistles, the phone provides practicality that is comfortable yet advanced. For example, the Signature includes a button on its side that connects users to Vertu Concierge, a service that assists callers with needs ranging from hotel and restaurant reservations to wedding planning.

Nuovo says his customers deserve nothing less. “Why should a man who buys a fine mechanical watch or a high-performance car compromise when it comes to his mobile phone?” he asks, adding that one could, after all, drink out of a coconut as easily as a crystal goblet. “All objects that have a purpose evolve this way.”