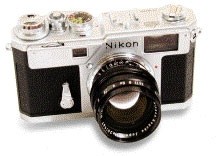 Digital cameras are about the size of a wallet and are just as easy to operate. Preview screens provide infinite opportunities to get a photo right, and features such as Sony’s Night Shot and NightFraming enable you to compose and take pictures in little or no light. These cameras are foolproof—and that’s what is wrong with them.

Now that we have seen what technology can do, we recognize what it has taken away. The skill and artistry once required for producing a beautiful picture have been rendered irrelevant. It is still possible, however, to practice the art of photography, and you can do it with new equipment, because the camera industry has embraced the retro movement so prevalent in the fashion and auto industries. Leica, Contax, Konica, and Nikon are all reintroducing range finders that have the look and feel of the classics, while incorporating modern features that make them more convenient to operate.

Contax, for example, has a titanium range finder with exceptional Zeiss optics called the G2 ($1,500). Its modern features include a motorized advance, auto film loading, and an electronic shutter. The aluminum Konica Hexar RF ($1,900) has a modern electronic shutter and auto advance, but it maintains manual focusing. Hasselblad’s Xpan ($1,700) integrates optional automatic focus and interchangeable lens, plus it is the only range finder that shoots regular- and panoramic-size negatives.

“These are cameras made the way they used to be, with caring, honest parts, and precision optics,” says Michael Bard of Newtonville Camera in Newtonville, Mass. “People want these to remind them of the camera they had or their grandfather had when they were growing up.”

Perhaps you took your first picture with a range finder. You had to trust that something happened because with a range finder, you don’t see the shutter close because you don’t look through the lens. Likewise, everything you see is in focus except for a small area in the center that shows two images of your subject. Turning the lens barrel combines the images and brings your subject into sharp focus. (The next generation of cameras is the single-lens reflex—SLR. You look through the lens, and the image is blurred until you adjust the focus.)

Some of the best-known photographers of the 1950s did not make the switch to SLR cameras, believing they got a sharper focus with range finders, says Stephen Gandy, a collectible camera dealer who operates www.Camera Quest.com. “Personally, many of my sharpest shots were taken with range finders,” he adds.

At that time, some photographers claimed that the trade-off of a sharper focus was not worth the difficulty of loading them. Today’s best range finders eliminate the previous obstacles, offering viewfinders that have built-in light meters and better optics. They also are larger and brighter than their predecessors and easier to load.

The Leica O ($2,400) is a reproduction of the original 1920s preproduction Leica, of which only 31 were made. The new Leica O (or Leica Null) preserves the dimensions, shape, surfaces, and even the leatherette of its namesake and is finished in the same brass and black lacquer. Both Leica O models also have fixed lenses. The only differences between the two besides almost 80 years is that the newer model uses modern film cartridges and a modern lens coating, which helps prevent scratches and lens flare.

Nikon’s S3 2000 ($5,000) is a reproduction of the first S3, produced in 1958. (Because so few of the 2000s were made, Nikon had a lottery for the larger-size dealers in the United States, and then winners received only one.) The reproduction has the same durable body and takes the same pictures as the earlier model in part because Nikon reverted to the original formula for the lens design.

“What we’re seeing is a return to good, quality photography and quality optics,” says Bard. “There just isn’t anything out there that compares to these cameras.”