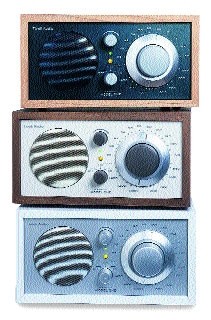 Do not, implores Tom DeVesto, call it retro. The Model One table radio may harken back to the 1950s, with its analog tuning dial, single 3-inch speaker, and mere three dials, but its sound is undeniably modern. “We’d cringe when we’d hear, ‘It’s a retro product,’ ” says DeVesto, who developed the Model One with electronics legend Henry Kloss. “We’ve reached a point where no one knows how to operate their home system, so we thought, wouldn’t it be nice just to have something that is simple, easy to work, and gives you a lot of enjoyment without a lot of dials, buttons, and levers.”

Kloss died in February, 15 months after he and DeVesto created their fourth company together, Tivoli Audio. “Henry used to say that most retro products are just junk made to look like something when products were made well,” says DeVesto, Tivoli’s CEO. “But the reason the Model One reminds you of a time when products were made really well is because this product is made really well.”

Kloss and DeVesto spent 25 years creating audio products, some of which are still considered benchmarks in their class, including the Advent loudspeaker, the KLH compact music system, and Acoustic Research’s AR-1W subwoofer. The Model One carries on the distinction. The radio achieves exceptional reception, even on closely spaced stations, because it uses technology originally developed for cell phones, and because its tuning dial moves in smaller increments than those on other radios. Also, by tailoring the amp’s equalization to produce just the right amount of en-ergy at each frequency, the sound is warm, never tinny, and has enough bass to produce a rich range. “We maximized every scrap of performance you can in a small cabinet,” says DeVesto. “We’ve always had fun doing things that make people say, ‘Wow, that’s coming out of that little box?’ ”

The Model One is available in four color schemes—classic walnut, cobalt with cherry, hunter with maple, and silver with white—and is priced at just under $100. “Henry’s legacy,” says DeVesto, “is that he tried to bring high quality and high performance to people in ways to make it affordable for a great many people as well as make it desirable for people who can afford anything.”