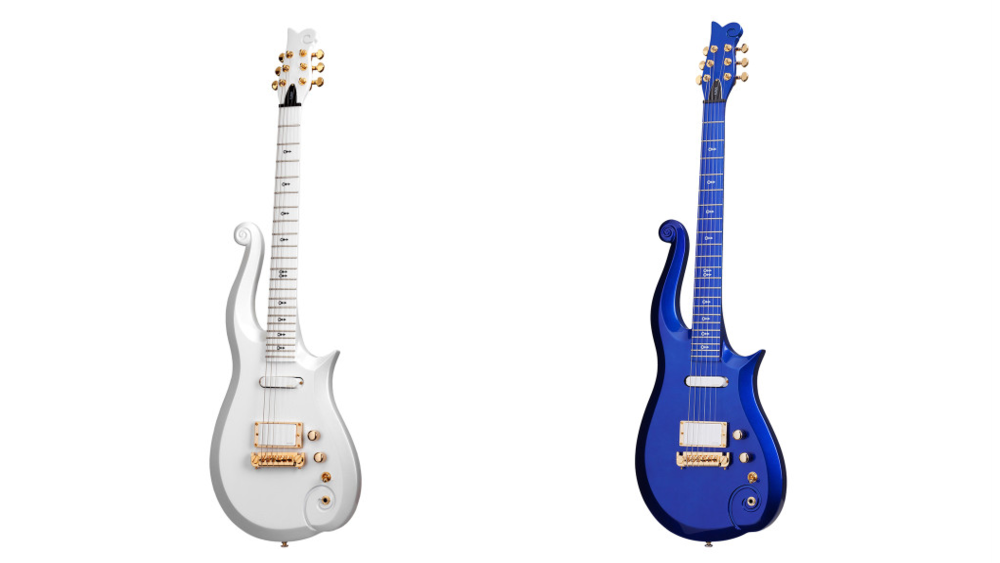 It’s easier than ever to get your hands on Prince’s signature Cloud guitar—well, an authentic replica of the instrument, at least.

The late superstar’s estate has made Schecter model Cloud guitars available worldwide for the first time through his website. Previously the only way to purchase one of Prince’s signature guitars was to buy it in-person at Paisley Park in Chanhassen, Minnesota.

Although it’s mainly remembered as the object of The Kid’s affection in the 1984 film Purple Rain, Prince and the instrument go back even further, according to his estate. The Minnesota native first came across the model for the Cloud guitar, a wild custom bass, while instrument shopping with friend and first bassist André Cymone. He’d end up buying his pal the bass and Cymone can even be seen playing it in the 1979 music video for “Why You Wanna Treat Me So Bad?” Then in 1983, as Prince was looking for the perfect prop in preparation for his first movie, he brought the stylized bass to a young Minneapolis luthier named Dave Rusan, who would make him four copies of the instrument in white. The rest, as they say, is music and movie history.

“It’s so much more than just part of a costume. It’s a means of expression, power, identity, you name it,” Rusan said of the guitar in a 2016 interview with Premier Guitar.

Prince seemed to agree and would go on to use the instrument throughout the rest of his career, eventually turning to Schecter to repair, modify and make new versions of the beloved guitar between touring and recording. The company also made a select run of Clouds in 2000.

Available exclusively through the Prince.com store, the guitar will cost $1,750. Orders are expected to ship in November.

Of all the instruments that Prince played throughout his career, the iconic Cloud Guitar has one of the most alluring and mysterious backstories. 🔸 The Cloud first entered the public’s consciousness as the object of The Kid’s affection in Purple Rain, and the way Prince’s character in the film pines after the distinctive satin curves of the guitar as it sits in a display window speaks to just how mesmerized he was by this instrument. 🔸 Prince first came across the model for the Cloud while browsing in a guitar shop with his childhood friend and first bassist, André Cymone, in the late 1970s when Prince was at the very beginning of his solo career. The two musicians were intrigued by the custom bass guitar with hand-carved curves and swirls, which resembled a classical instrument more than one you would see in the hands of a rock or funk musician. 🔸 In 1983, when it came time for Prince to choose an instrument to play in his first film, he brought the Cloud bass to a young Minneapolis luthier named Dave Rusan, who worked at Prince’s favorite local guitar shop, Knut Koupee Music. Recreating the bass as a prop to use in the film took months, and only four copies of the original white Cloud Guitar were made by Rusan — but his Cloud Guitars laid the groundwork for one of the most intriguing stage instruments of the 1980s. 🔸 Dave Rusan understood the signiﬁcance of a well-crafted guitar to an artist like Prince. “It’s so much more than just part of a costume. It’s a means of expression, power, identity,” he told Premier Guitar. 🔸 Prince had the Cloud Guitar remade many times throughout his career in different colors and finishes, and the instrument re-emerged at several key points in his artistic evolution. Prince would call on the company @schecterguitarsofficial to repair his Clouds and manufacture new replicas for his use, including a run that was sold to fans on Prince’s HitnRun Tour. 🔸 In recent years, the Schecter replicas of the iconic Cloud Guitar have only been available to purchase in-person at Paisley Park. But starting today, players around the world can purchase these exclusive, authentic Cloud Guitars from the Official Prince Store.

Can Beauty Be Sustainable?

Prince’s Path to ‘Sign O’ the Times,’ Told by His Musicians, His Fiancee and His Longtime Engineer

Have Retailers and Landlords Turned a Corner in Clash Over Rent?