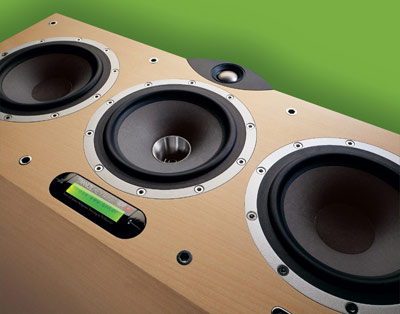 With the introduction of Blue Ocean, we may be witnessing the emergence of a new product category. The transparent acrylic screen is such a standout that it likely will silence any potential buzz around an impressive assortment of soon-to-debut audio gear.

If picture quality is your theater’s outstanding feature, imagine the aesthetic enchantment of a home cinema in which the centerpiece appears to be a slab of lucid, frameless glass. With the addition of a rear projector, the acrylic piece from Nippura, called Blue Ocean, transforms into an amazing screen that the company promises is able to provide high-definition video resolution in displays as large as 300 inches diagonally—or about 25 feet.

Nippura, a Japanese company that dates to 1968, has created some of the world’s largest acrylic aquariums, including the ones at Atlantis II on Paradise Island in the Bahamas and the tanks at the Monterey Bay Aquarium in California. It has applied this expertise in large-application, cell-cast acrylic—the blemish-free type used for fighter-jet canopies—in producing the seamless and nearly indestructible Blue Ocean displays.

The projected image, which appears to float in space, is created when light reflects off a proprietary solid sandwiched between the acrylic. This invisible layer, which the company calls Blue Ocean Diffusion Medium, is the secret to the deep, 3-D effect of the image.

When not in use, the screen resembles an ice sculpture. Its weight—the 70-inch model is three-quarters of an inch thick and just 70 pounds—makes the format more versatile than plasma, its closest competitor.

Initially, Nippura will offer 70-, 84-, and 100-inch 16:9 aspect ratio screens (starting at $7,200), but the company will also accept orders for flat, convex, and concave screens of any shape and size. With models as large as 25 feet, Blue Ocean screens can be used in cinemas, museums, conference halls, theme parks, and anywhere else large-scale, quality video is required. Consider the heightened sense of reality created by watching The Perfect Storm outdoors during a rain shower.

Smaller versions of Blue Ocean displays are suitable for boardrooms, though there is a distinct possibility that your audience will be distracted from your message while marveling at the screen.

Tannoy is one of the world’s oldest speaker companies, but it is not wedded to the past. The Scottish manufacturer’s latest confection could not have been conceived until digital technology had evolved enough for even the most techno-fearful consumer to embrace it. Tannoy’s Eyris line, including the iDP speakers (about $30,000 for the 5.1-channel system), will make life easier for homeowners and for those who install their A/V systems.

Digital programming enables the system to set up itself by matching the factory’s frequency response to the variations in a particular room’s acoustics. In addition to establishing correct levels, iDP accounts for speaker positioning (in a corner, near a wall, or even in a wall), programs acoustic delay for difficult positioning, and manages the bass according to the type of program material.

Tannoy, however, has not forgotten what made it great; iDP uses the company’s classic Dual Concentric drive units for near-perfect imaging and dispersion. Expandable, flexible, and networkable, Eyris iDP stamps Tannoy with 21st-century credibility.

Amplifier wattage used to be the hi-fi equivalent of automobile horsepower. Now, the gold standard is subwoofer diameter and the amount of onboard power a sub can deliver. Companies newer to the sub culture, such as MartinLogan, Krell, Wilson Audio, REL, and others, have been steadily elbowing their way toward Velodyne, which stands at the front of the woofer line. In a move likely to reaffirm its position, the company plans to unleash the Signature 1812.

The 1812 ($11,999) stands 40 inches tall, weighs close to a backbreaking 400 pounds, and is available in a maple- or cherry-veneered cabinet with aluminum trim. The name is derived from the dimensions of the two bass drivers: the 12-inch woofer for the upper bass frequencies and the 18-inch woofer for the deepest frequencies—the ones that shake furniture and rattle windows. Two 1,250-watt amplifiers provide the requisite power. It is no coincidence that the subwoofer’s moniker recalls a certain speaker-busting work by Tchaikovsky, the one intended to include real cannon fire. —k.k.

One of the vital tenets of life states that mixing liquid with electricity leads to trouble. Nonsense, say the people at Von Gaylord Audio (formerly Legend Audio Design), a company that plans to deliver by year’s end a high-power mono- tube amplifier cooled with liquid.

Heat dissipation presents a Catch-22 for solid-state and tube power amplifiers: the higher the power, the greater the heat. When the tubes or transistors remain powered continuously instead of switching on and off, a state known as Class A operation, the heat increases and could shorten the life of the amplifier.

Von Gaylord’s novel approach with the 200-watt Uni ($28,000 per pair) involves submerging the massive transmitter tubes on each amplifier into what the company calls a “dielectric cooling fluid,” a liquid that contains no water. The experiment easily could have turned into a regrettable contretemps, but the curious concept indeed safely tamps the heat. Very cool. —k.k.

At a young age, Luke Manley learned from his father, David, about making tube amplifiers that could withstand the rigors of studio life. However, he has continued to contend with consumers’ deep-seated notions that tube amps are high-maintenance divas. No more. The younger Manley is determined to put to rest forever any worries about unreliability, uncomfortably hot operating temperatures, and possibly exorbitant maintenance costs. With the Siegfried, a nobly named 800-watt amplifier that sounds sweet and clean, warm and luscious, Manley allays any fears about committing to this sonically superior technology.

The 175-pound tower ($40,000 per pair) exhibits all of the virtues of classic tube amplifiers and offers more: Onboard diagnostics enable the amplifier to adjust itself automatically to maintain optimum performance. The Siegfried, for example, alerts users to which tubes may need replacing—and when—by monitoring and indicating tube life, real-time AC voltage, and actual amplifier operating time (for better servicing results). Tube users have been accustomed to manual periodic biasing (the tube amp’s equivalent of a tune-up) for optimal operating conditions, but the Siegfried continually re-biases itself. In short, Manley has applied to hi-fi the caliber of diagnostics that automobile owners have long taken for granted. —k.k.

Musical Fidelity marks its third decade by referencing the era in which it was founded, that of the black vinyl LP. While the rest of the high-end community frets about the Super Audio CD versus DVD-Audio digital format war, the United Kingdom’s most prolific brand is introducing its first record spinner.

The M1 (about $5,000) consists of two massive translucent acrylic slabs that rest on four oversize machined metal feet. Metal weights between the platter’s two additional layers of acrylic ensure perfect balance, and the belt drive provides superior isolation from mechanical and airborne vibrations. A jewellike disc clamp secures LPs firmly to the platter, but the true gem of the M1 is the inaugural fitting of a completely new tonearm from SME, long recognized as the leader in turntable and tonearm manufacturing. The straight arm bears a pivoting assembly that appears to be an evolved form of SME’s classic model from 1961—the most successful separate tonearm ever. To create a complete package, the M1 comes with a cartridge made by Grado.

The M1 will not be available until early December, but one cautionary comment is in order: Musical Fidelity has a reputation for releasing limited editions and leaving many latecomers frustrated. —k.k.