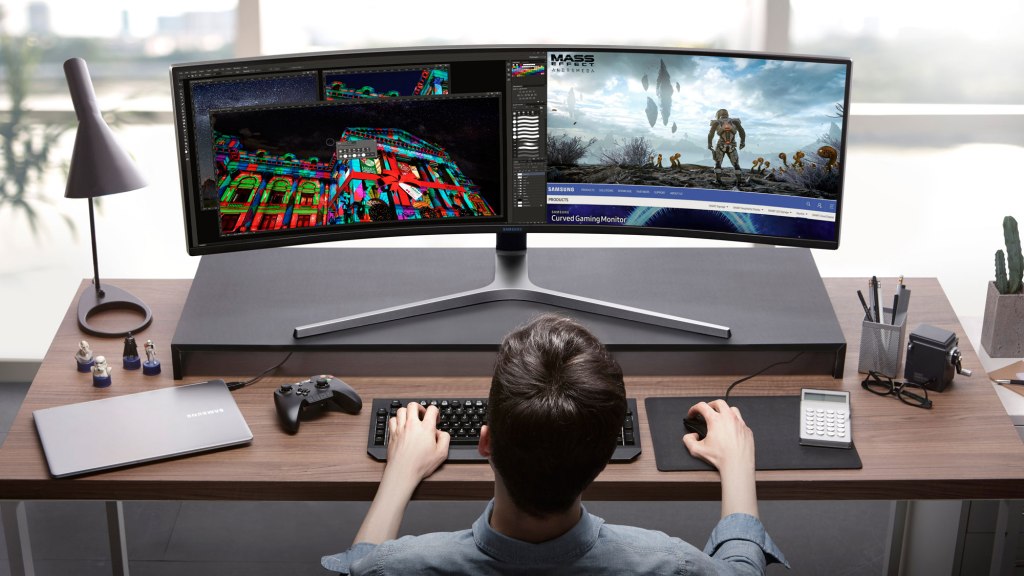 TV display technology is in the midst of something of a renaissance; the last few years have seen the proliferation of ultrathin panels, curved screens, and vivid high-dynamic-range (HDR) picture. And while these features are now commonly seen in living room sets, the technology is also being used to great effect in desktop computer monitors—especially when it comes to units designed to meet the exacting demands of the ultimate test of home video performance: computer gaming.

Samsung’s new curved CHG90 QLED Gaming Monitor is designed to completely immerse gamers in their favorite pastime. The screen is gargantuan, measuring 49 inches diagonally. It also features an ultra-widescreen aspect ratio (32:9 rather than the standard 16:9), giving players a better view of the action on the periphery of the screen. When not in game, the monitor can be set to display a number multi-screen configurations, allowing all that real estate to be used for productive purposes.

The efficacy of curved panels for at-home use is controversial in the A/V world; to really experience its purported immersion benefits, viewers need to be positioned directly center and the screen needs to be big enough to dominate their viewing area. It can be tough to fulfill these criteria in a living room environment, but for a single-person desktop setup, a curved panel makes much more sense.

Apart from its size, the monitor is designed with features to make gaming as seamless as possible. In fast-paced competitive videogames like first-person shooters, mere milliseconds can make the difference between landing a head shot and waiting impatiently for a respawn, so the Samsung monitor features a lightning-fast refresh rate of 144 Hz and advanced picture processing to mitigate motion blur. It also supports high-dynamic-range video to deliver greater contrast and vivider colors, not only making the visuals that much more gorgeous, but also allowing players to more easily distinguish in-game object (and foes).

The $1,500 CHG90 QLED Gaming Monitor is available now for preorder, with units expected to ship in mid-August. As processing power increases and game developers craft even more vibrant, beautiful worlds, it is only inevitable that we will begin to see greater numbers of monitors (LG has announced its own 144 Hz, ultra-widescreen offering, for example) purpose-built to deliver the most impressive experience possible to demanding gamers. We’re looking forward to it.