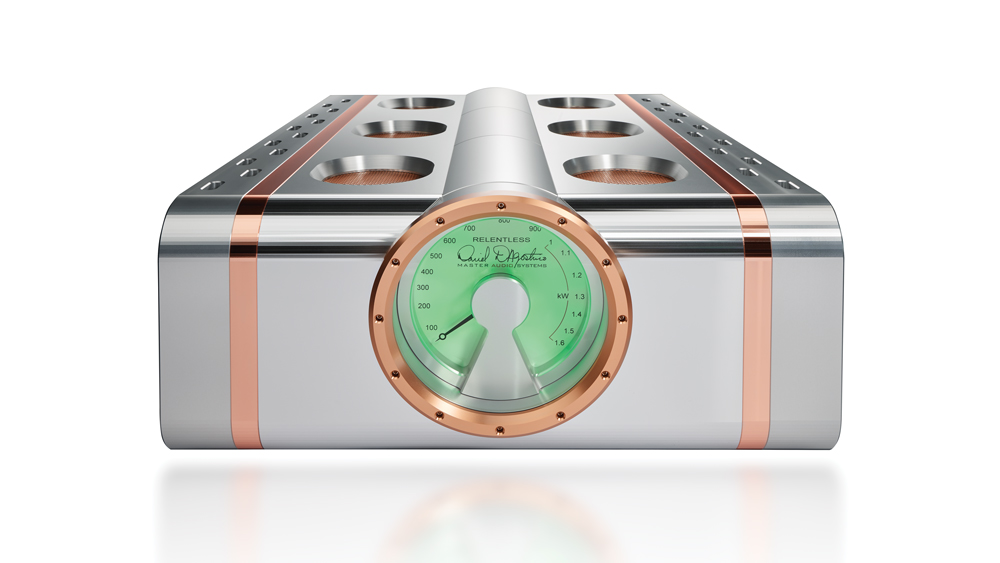 Like car guys, audiophiles are obsessed with precision and performance. While one pursues getting the best handling and speed out of their auto, the other tries to coax the most accurate musical reproduction from their sound system. If you’re located somewhere in the middle of that Venn diagram, check out this new audio gear from Stax and D’Agostino, and listen to it while sitting in a chair designed by Lamborghini.

After building a history of success in the audiophile industry, some manufacturers decide to release a statement piece that represents a culmination of all their expertise. These transcend mere equipment and venture into the realm of art. Case in point is Dan D’Agostino Audio, which recently announced its largest, most over-the-top reference power amplifier ever: the D’Agostino Relentless, a monoblock amplifier.

Because it’s a mono amp, the Relentless is sold in pairs for a combined price of $250,000. Each amp can seamlessly drive up to 6,000 watts into two ohms, where ohms measures the electrical resistance of the speaker. Most high-end speakers have a resistance of four ohms or less. This huge power is capable of driving any speaker on the market. This does not mean the amps are meant to just play loud music. Rather, amplifiers of this nature are designed to reproduce contrasts in music as perfectly as possible. For example, picture a flute playing a quiet passage, followed by the entire orchestra playing fortissimo; that transition from quiet to loud is demanding for any amp to reproduce accurately. The Relentless monoblocks can do it with ease.

The amp is designed to carry a perfect audio signal, and without the circuitry tricks of other amps, such as global negative feedback. Each has a heat-dissipating disclosure that houses a 5.5-kilowatt transformer and a 600,000-microfarad capacitor bank to ensure there is no shortage of power when the music demands it.

The chassis is machined from copper and aluminum, designed to eliminate heat even at maximum system output.

The power meter adjusts based on the input signal, so it will be readable even during very quiet passages of music.

Dan D’Agostino has been developing amplifiers for nearly 40 years, and his designs are respected throughout the audio community and beyond. Considering his massive success, it is only fitting that he release massive amplifiers that are possibly among the greatest in history. —Alexander Lamascus

The once esoteric habit of enjoying music through head- phones has, for today’s younger generation, become the preferred method of turning on, tuning in, and dropping out. But serious listeners have always appreciated the fidelity afforded by small transducers ring directly into the ears, eliminating all sorts of frequency anomalies caused by speaker/room interactions and rendering piles of expensive, space-consuming electronic gear redundant.

Like a voice in the wilderness, the Japanese audio company Stax—begun in 1938—has been championing personal listening since 1959, when founder Naotake Hayashi developed his SR-1 Earspeakers, the world’s first electrostatic headphones. Stax calls its devices earspeakers, a clue to how seriously it takes music reproduction. The current flagship, the SR-009S ($4,550), is best compared to the nest loudspeaker systems. Yes, they are that good.

Unlike high-mass dynamic drivers, electrostatic transducers employ a Mylar diaphragm coated with electroconductive material suspended between two parallel, perforated electrodes. With a fluctuating audio signal, the featherweight diaphragm moves back and forth by the repulsion and attraction of electrostatic forces. Music is reproduced with an uncanny speed and transparency that breathes life into recorded instruments and voices, creating a genuine suspension of disbelief.

The original SR-009 was introduced in 2011. The successor SR-009S looks the same but features improvements like gold-plated electrodes, whose minus-
cule perforations are carefully etched to remove sharp edges that can cause micro- di raction anomalies and blur sound, while resonance within the metal body has been further reduced. The net result is substantial bass response rivaling the best dynamic headphones, but with a midrange lucidity and sky-high treble extension that puts Stax in another league altogether.

When powered by the new Stax SRM- D10 amp/DAC, one arrives at the most exclusive portable personal listening system imaginable. —Robert Ross

The chair also offers brain massage modes that use binaural beats to heighten theta brain waves and massaging neck cushions to increase bloodflow to the head.

Priced at $30,000, the LFB-750 is upholstered in tan or black leather. And the headrest’s embossed Lamborghini crest is a reminder that even the most bullish performers need quiet time. —R.R.